10 Ways Honesty Is Going To Make You More Money

I like how NBC thinks it’s got one over on us.

“We’re not going to have any business relationship with Donald Trump anymore! Particularly that trashy Miss Universe contest he thinks he owns.”

I’m glad these media giants are in bed together now.

In other breaking news, the World Wide Wrestling Association is now about a real sport and no longer racist because they broke off relations with Hulk Hogan.

Then people say to me, “Don’t you feel like you’re not being responsible when you don’t read the news?”

All I can do is laugh.

No. That’s not true. Sometimes I feel angry at these people. Don’t they see?

But I don’t care. It actually is funny. Another Buzzfeed headline: “A teen tried to make her eyebrows look like a famous model’s, but it ended up going poorly.”

I almost clicked on that one. Like…how poorly did it go?

Are her eyebrows now a mustache? Are they sideburns? What the hell happened to her eyebrows?

I once went out to dinner with a friend of Hulk Hogan’s. Bubba the Love Sponge, a radio guy who released a sex tape of Hulk’s.

In the dinner he pulled out his gun and pointed it at me. Then he said, “check it out” and he threw it at me.

I wanted to die right then. I wanted the headline to be, “Bubba the Love Sponge shoots dead unknown blogger.”

When the universe was created it spit out a lot of hydrogen atoms.

This is going to be a serious scientific lesson. Hold on.

The hydrogen atoms boiled into helium atoms in the process of nuclear fusion in the inside of a star.

When a star gets so intense it turns into a supernova, other atoms are fused together. Like lithium, carbon, etc.

Most of the atoms on your body are carbon atoms that were fused together in the center of a supernova.

Buzzfeed: “This toddler is a huge fan of a personal injury lawyer.”

Almost everything about you is stardust. Your body. Your brain. Your heart.

When I kiss Claudia, it’s like I’m kissing the center of a supernova.

I feel there’s one other rule that is critical to know in life.

I tell my kids, “There’s always a good reason and a real reason.”

If you want to go to the mall because you need school supplies that’s a great reason. Then there are boys and donuts there. That’s the real reason.

NBC and the World Wide blah blah had a good reason. Who knows what the real reasons are.

If you always look for the real reason, then the world peels open it’s honesty to you. You become a human lie detector.

Your boss wants you to work late. The project is really important to the client and all of our jobs.

Real reason #1: I’m going to get fired if I don’t make everyone work because I slacked off earlier. So I’m scared to be yelled at.

Real reason #2: I want to show that I have total control over you. That I am your master and you are my slave.

Real reason #3: I used money to bribe you to work for me but now I want to show you that I can also use fear.

In the long run, the real reason will destroy you if it doesn’t equal the good reason. This is why you make more money in the long run by being honest.

In the long run, NBC will disappear because Broadcast TV is dead and now, too late, they are trying to get into other forms of media.

This is what happened to me: when my real reason and my good reason didn’t match: I was always scared, I went broke. I lost my friends and family. Or maybe I never had them.

I was too disconnected all my life from the real reasons.

I pretend like my body is a company. Every good company has corporate values.

Value #1: My good reason has to equal my real reason.

Value #4: Every day, am I growing competence in something, improving relationships, and are my choices coming from a place of freedom.

Value #5: Don’t judge people. Because all of us are made out of the same stardust. We’ve all been on this terrifying adventure through time and space.

Value #6: Be honest (which is the same as value #1 but I want to repeat it because that’s how important it is).

That’s it. Why? Because I know that when I do those five things I’ll be a better friend. A better lover. And I’ll make more money.

Real reason: I want to be good to Claudia because she helps me with so much stuff and I’m pretty sure I love her all the time except when she bothers me.

Real reason: I feel real good when a day goes by and I look back and I think, “I was honest all day”.

Not radical honesty, which is BS. I don’t say to everyone on the street, “hey, I’d like to kiss your ear” even if I think it.

I don’t say to my daughters: “I really don’t want to go to your play”. (Well, I think I do say that. But I go anyway and they are happy).

When I was an employee, I really wanted to be as honest as possible (other than starting a company on the side and hiring my own company to do work for the company I worked for).

Real reason: I wanted to figure out ways to make more money while being an employee. 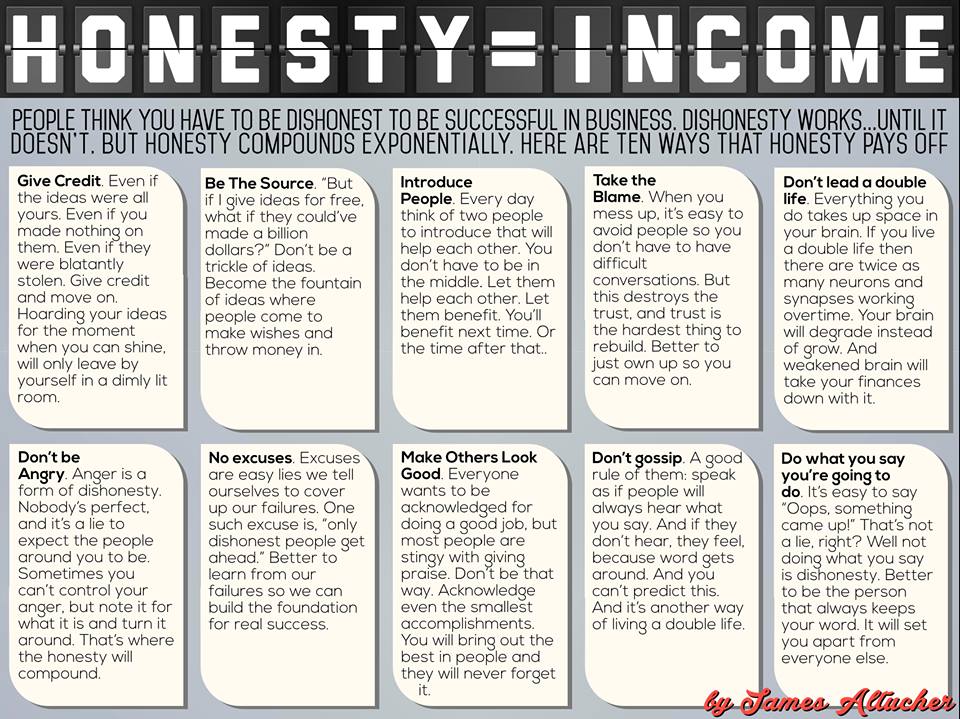