10 Reasons to Do Nothing

I had 2000 words written for a post this morning and my computer crashed and like the most base, worst, amateur, I didn’t have the file saved and I didn’t have any auto-save.

I was up at 3am today, I finished my reading (Miranda July, Charles Bukowski, Haruki Murakami, Jonathan Ames, ) and coffee by about 4am and then I began writing the infamous 2000 words. I listened to Scala’s “Don’t Break My Heart” the entire time I was writing (oh, one break to listen to “The Saturdays” singing “I Just Can’t Get Enough”. I’m a sucker for covers and I listen to stuff over and over.)

Then… hard crash. 2000 words is a lot of work.  It was about the various times I’ve been very “Busy” when it would’ve been better to just do “Nothing”. How life in general is better when there are more moments of Constructive Nothing. (There was a rant in there about Weddings also. How its mostly rude to invite someone to a wedding.)

It needed a bit of work. When something needs too much work its usually best to throw it away. Writing rule #34.

I could be angry about losing the work. Like I have been every other time this has happened to me since 1986 (Macintosh 512k then, my girlfriend then asking me “how much longer!” Macbook Air now, Claudia doing yoga upstairs). But why repeat the same old patterns? It won’t make me feel any better to be angry about losing a lousy 2000 word post. And it gives me a good chance to exercise those emotional muscles. To breathe deep. To let things happen without judging them, either good or bad. To not blame anyone but myself.

The post was going to be called “10 Reasons to Do Nothing”.

So I got what I deserved.

So now it was 5:30am. I shook Mollie awake and had her put on a sweater over her pajamas. We walked out to the river. 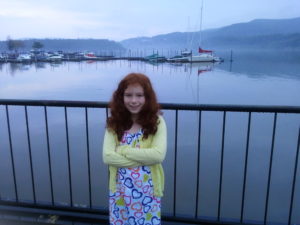 Postscript. mini-post: 2 Things That Inspire Me:

Beautiful interview with a woman who studied piano under Bartok. Interesting to see how his creativity mingled with his technique, his politics, and his personality.

This guy leads a dream life. He quit his job, knew next to nothing about photography, and started carrying a camera around the streets of New York, taking pictures of people who he thought made fun fashion statements. Motivated only by his passion, his work became a hit, and now a career for him.

(one of his photos)
Question: So tell me: what do you do when you want to do a Constructive Nothing?
Share This Post