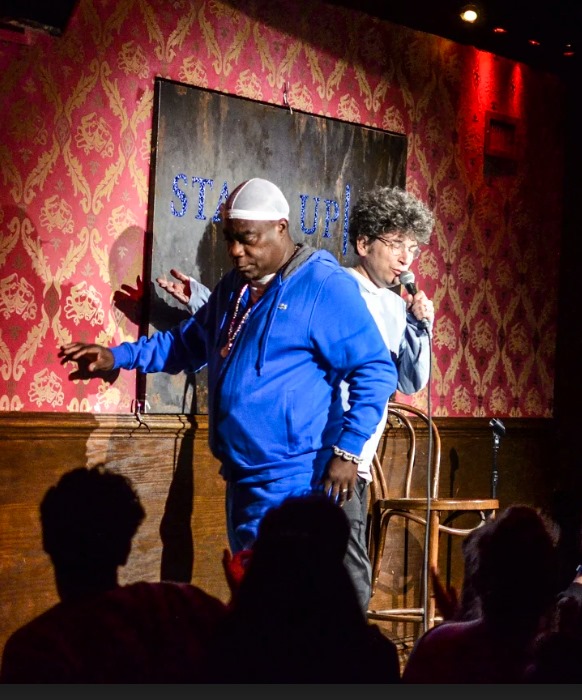 Tracy Morgan stopped by the club.

He went up for 20 minutes just spewing jokes nonstop. Everyone was laughing.

He had this raw energy. He was shouting and laughing. And making faces. It was like there was no filter between his brain and the audience.

Just the way he said it. BOOM!

He said to me afterwards in the bar, “Just say what’s on your mind. You got troubles? Talk about it. That’s what they want to hear.”

Then he started making a lot of jokes about sex. Everyone around him was laughing while he simulated screwing his chair.

The only way to get better is to constantly experiment.

I performed immediately after Tracy Morgan came on the stage.

It was scary. The audience was wound up. We just saw Tracy Morgan!

I was scared. “What am I going to do?” I said to someone. There’s never any answer to that but I always ask it.

I took the microphone from Tracy. People started to get quiet.

If I had this choice: perform BEFORE or perform AFTER, I would only choose AFTER.

I have to choose AFTER.

Stay in your comfort zone for 10,000 hours and you might get good.

An experiment means: Try something that everyone else is afraid to try. Try to learn what happens on the other side of “You CAN’T/shouldn’t do that!”

Then you are the only person on the other side of Can’t. That is success.

I know this because I’ve done it. You can fail on 10,000 experiments but then suddenly you’re Thomas Edison.

That’s why years of invisible work seem like overnight successes.

I used to cry after failing. Sometimes I still do. It’s so painful. I always feel like giving up.

But maybe the one thing I learned is to keep the experiments small.

Tomorrow is always another day. A new experiment.

With comedy, I’ve performed right after many great comedians:

I had to go to the bathroom really badly.

I felt like I was going to shit my pants. I was thinking of making a joke about that but wasn’t sure. What if it was dumb?

I looked it up on Google trends. The phrase “I shit my pants” is popular in Pennsylvania. Why?

And the most commonly searched phrase right after “I shit my pants” is “I hate myself.”

That seems funny but I had no punchline for it. It’s a funny premise. Also, apparently nobody in Oregon shits their pants. I don’t know why.

Why are so many people unhappy?

When you go on stage the lights are bright so it’s hard to see the audience. Which makes it harder to connect with them. You have to look them in the eyes.

That was another hard experiment for me. I don’t like to look at people in the eyes.

Here’s an experiment I did the other day:

I took “50 Shades of Grey” and replaced every single word with a synonym .

For instance, “She hurried from her tests” became “Jackie rushed after her exams.”

I used Fiverr to get a cover, uploaded the book to Amazon, and hit “Publish.” It’s a published book now.

More on that experiment later.

With standup comedy there are many ways to experiment:

A) Perform after someone really good. The audience starts off not liking you. Win them over.

B) Do the “check spot” — the spot when the checks are being handed out and everyone is talking. You get really good at learning how to dominate a distracted audience.

C) Host. Which means you do six mini-sets. You get really good at reading the energy of a room and bringing it back up.

D) Go up first. Because the crowd is not fully warmed up yet. Children laugh 300 times a day. Adults laugh only five times a day. If they are not warmed up, they still don’t remember how to laugh.

E) Go up last. Because the crowd is tired and drunk.

F) Do 100% crowd work. Because you have to be really sharp and in the moment. “You’re from Buffalo and you install floors?” And then you have to make a joke out of that. 100 times in a row.

H) Act out the joke. Voices are funny.

I) Make jokes that will make them hate you. Practice dealing with either silence or hecklers. Silence is the cruel beast of standup comedy.

J) Tell a true five-minute story about your life. Because it forces you to find, in real time, the funny in your story.

This is proof that DOING is better than THINKING. You can only work out those jokes with 100 strange eyes staring at you and doubting you.

And other ways. I don’t know. I am the student. I am just doing experiments.

Each experiment changes me. I get home and write down what I learned.

I did standup comedy on a subway car once. That was a hard experiment.

But it forced me to get quickly to the punchline. No extra words.

And it forced me to deal with 20 strangers hating me.

Tracy Morgan was simulating having sex with his chair later in the bar. He pointed to my wife. “She gets it!”

Then this weird looking guy comes up on stage. Crazy hair. Glasses. Sweating.

Tracy shakes his hand and walks down the steps. The crowd is cheering. Not for the new guy. For Tracy. They’re already missing him!

The weird looking guy, 10 months older than Tracey Morgan but a beginner still after four years, blinks into the bright lights.

The people stop cheering for Tracy and begin staring at the guy on the stage.

I look at them and have only one thought.

One day I hope my kids love me.