11 Unusual Methods for Being a Great Public Speaker

I was very very nervous about public speaking to these people (the name of the conference is so boring I can’t even repeat it). For one thing, its impossible to make esoteric math like “Category Theory” funny.

So when the conference was having their big banquet and awards ceremony, Prakash (my mentor at the time and co-author on the article I was presenting) took me to the speaking hall. He said, “you are hopeless. We have to skip the party or you are going to be an embarrassment to me.”

We were the only ones in the speaking hall while everyone was in the banquet.

He said, let me see your slides. I showed him. He said, “these are all awful” and he quickly rewrote all of them and explained why he was rewriting each one. Then he sat in the back of the hall and had me stand on the podium. He said, “give the talk.”

For every slide, he went over and over it again. “You have to have a joke or something that surprises on each slide.” He would have me walk to different parts of the podium for different slides. Or move my hands a certain way to make a point. He went over every nuance with me. He taught me how to tell a joke and wait for the laugh. If nobody laughs “Tell people, ‘you were supposed to laugh at that’ even if it’s not funny. And then they will.”

I horribly disappointed him when I was thrown out of graduate school less than a year later and he hasn’t spoken to me since. (more on why I got thrown out in “How I Torture Women”)

The next day I gave the talk and I was very happy – people laughed at my jokes. A woman came up to me afterwards and said, “I had no idea Category Theory could be so funny.” Prakash even said to me, “you were a natural, they can’t teach that.” And I know he was just being nice but it was the highest praise.

A colleague of ours, sitting next to Prakash during my talk whispered to him during the talk, “why didn’t James even ask for my help on this.” Prakash turned to him and said, “because he hates you.” From Prakash I learned a particular brand of honesty.

So I have to give a talk Thursday and on June 13 so I’ve been thinking of these items.

Here’s my 11 unusual tips on being a better public speaker:

1)            Start off with a joke. This is a must. People need to laugh within the first 30 seconds or else you’re going back to your cubicle at the pencil factory and they will never remember you.

I spend about at least one to two hours before the talk coming up with the first joke because I know that’s what starts off the good feelings for the rest of the talk. I usually make it relevant to the locale and the topic or the news (Tomorrow’s joke starts off: “True story: two days ago I was having dinner with the prime minister of Pakistan and…”) And it actually will be a true story.

2)            Get on their level. This has two meanings. I once fell off of a podium while pacing around giving a talk. I was very embarrassed. So now I always get off the podium and explain that I’m afraid to fall off so I’m just going to walk around if that’s ok with everyone. People laugh a little bit and it physically and mentally brings me onto their level.

3)            Very important: I very very slightly slur my words. A very small slur. I don’t drink at all. But by slightly slurring my words it’s as if I’m telling my brain I’m a little drunk. When you’re a little drunk you don’t really care what people think of you and you take a few more chances than you would’ve otherwise. It also makes me a bit more brutally honest. And everyone likes a nice drunk!

4)            I try to use JUST one word plus one image per page. No more! You think people really want to come to a talk and read a novel? They want to look at funny pictures. At heart, we are all two year olds trying to just stay alive. I’m not saying this in a patronizing way. Its just true.

Here’s one slide from my upcoming talk: 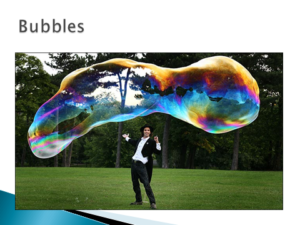 Colorful, topical. It’s the world record bubble creator, so its interesting. And has the flare of magic around it. Given recent events, if I can’t fill up 30 seconds of brilliant insight with this slide then I shouldn’t be doing any public speaking.

5)            Try to shock people on each slide. This keeps them awake. They’ve just been jolted with electricity. Like a taser. That hits their brain to keep them awake for another 30 seconds (I say this all because I hate talks and I know I fall asleep every 30 seconds during a talk) Here’s another slide from my upcoming talk:

I then tell people I just bought this house. People are shocked for a brief second (the human mind is conditioned to believe everything it hears). Then I say, “no I didn’t”. And everyone relaxes. All of their muscles relax. The jealousy muscle, the reality muscle, the humor muscle. Everything settles down. Some chuckles. Its obviously not my house. But now we can all move ahead and talk again.

(I actually think the above house is Stevie Cohen’s house. Here’s how Stevie Cohen Changed My Life).

6)            Self-deprecating. Very important to remind people that you have the same fears, worries, faults that they do. We’re all human. We all have lots of problems and we’re just trying to get from birth to death and solve those problems.

So hell, let’s solve some of those problems right here together in this talk.

Remember you don’t get wiser when you get older. You just get older. You have to practice to get wiser. Self-deprecation, really studying your foibles, helps with the wiser part.

So in the middle of my talk I remind people I’m not allowed to drive. The reason: because unfortunately there was a photographer present the last time I drove a car. Here’s the result of that photographer taking a picture of my last driving experience: 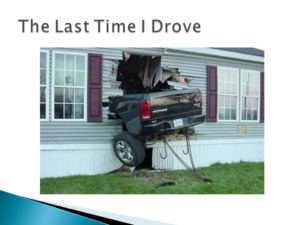 7)            A talk should be a three act structure, like a play or a movie. Or like July 4 fireworks. In the first third of a talk, set up “GREED” – why they need to be listening to you. In the second part, set up “FEAR” – what could happen if they don’t listen. Then in the explosive third act, the grand show! .

You can tell how impressively intelligent I am when I have a slide like this in the final third of the presentation: 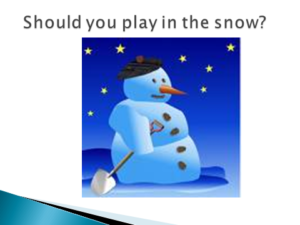 8)            The Pretty Girl Rule. You need a pretty girl in your presentation. Remember, magicians always have pretty assistants. So I put one in the slide show.

9)            Never ever self-promote. You have to come across as honest and not selling something. Nobody trusts a used-car salesman. So, in the final slide tomorrow, I have this book BUT I will, on purpose, yell at the person from Fidelity who organized the conference and say “I TOLD YOU NOT TO PUT THIS IN HERE!” and everyone laughs. 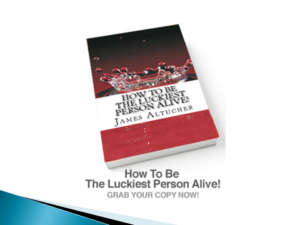 (click here to find out why i self-published, how you can, and how to get a free copy)

10)          Simple facts nobody knows. I peek in at talks sometimes and there’s all these charts and data. Puke! Nobody remembers stuff. This isn’t college you know! Keep the facts simple. Example: everyone thinks Greece is really important today in the news. You know the economy of Greece is the same size as the economy of Rhode Island? BAM!