13 Unusual Facts About the Saddest Photo in the Great Depression Last night I was on CNBC’s Fast Money. Everyone seems to want to talk about the impending Great Depression: Europe fails, contagion spreads it to here, all of our banks fail, everyone loses their jobs, blah, blah, blah. The world feels like it’s ending.

But it’s not. I listed my reasons why. I won’t list them again here. It’s not important. Innovation is happening. The economy is growing. And Europe is not going to disappear.

Look at the above photograph. That’s when the world was ending. But it wasn’t ending even then.

Realist photography is an interesting art form as it doesn’t seek to “create” but rather to document intensity exactly as it is, without embellishment. Dorothea Lange took the above photograph called, “Migrant Mother” which became one of the most iconic photographs documenting the dustbowl era during the Great Depression. Lange’s life underlines several themes that I try to cover throughout this blog:

A) you don’t need a formal education to become a huge success at a field you are passionate about. Lange didn’t go to college (as was more common then) and trained herself in her style of  photography

B) you don’t need anyone’s approval to fail or to succeed. her mother wanted her to be a teacher. When Lange tried to teach, all of the fifth graders climbed out the window and went to play in the yard. So Lange quit and became a photographer.

C) it takes suffering to recognize suffering. Lange had polio and her father deserted her at an early age.

D) Realism is often more powerful than imagination: On Lange’s photography studio at the time was tacked the note: ““The contemplation of things as they are / Without error or confusion / Without substitution or imposture / Is in itself a nobler thing / Than a whole harvest of invention.”

More facts about this amazing photograph: 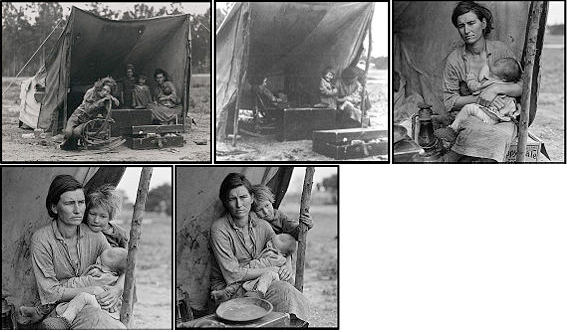 3. The identiy of the woman wasn’t known for 40 years. Her daughter later stated that the fame of the photo was so embarrassing to them that they were determined to never be poor again. Here’s a later photo, from 1979, with Florence in the middle and her children by her side: 4. Florence Thompson was 32 years old when the photo was taken and was raising seven children. I don’t mean to intrude on her story but I’m so terrified of getting low on money – Thompson in this photo looks like she’s 50 and scared. It’s that fear that I never want to feel. When I was a venture capitalist I could smell that fear on everyone who came to pitch their business. It was 2001 in the middle of the dot-com bust and I know these people can’t be compared with being pea-pickers (which is what Florence was) I just knew then how easy stress and depression and Depression can etch themselves across your face and body.

5. Dorothy Lange claimed that Thompson had just sold her tires to pay for food. Thompson’s son claims that this was not true but that Lange must’ve confused Florence with someone else. This is not widely reported when people quote Dorothy’s summary of the event, which is:

“I did not ask her name or her history. She told me her age, that she was 32. She said that they had been living on frozen vegetables from the surrounding fields and birds that the children killed. She had just sold the tires from her car to buy food.”

That said, just like the media today, I think people exaggerate suffering in order to generate a response (selling newspapers, winning a political battle, etc). It shows that an event is never really defined by the facts but by all the angles that are examining it. People need to reflect for themselves what an event means and not on the myriad analysis of it. Clearly there is pain here, we can see it on Owens’ face. We also know it from the time. And there would be another nine years of suffering as the country went from Depression to War.

Right now, I feel really bad for the people who are protesting at Occupy Wall Street. They are clearly upset. But they aren’t picking peas and raising seven children. We are living in different times.

In 1936, 20% of the children in America couldn’t buy clothes. Malnutrition was an epidemic. Unemployment (not shadow statistics compiled by a website but real unemployment) was at 19%.

6. A retouched image of the Lange photograph, plus her notes, were sold at Sotheby’s in 1998 for $244,000. I don’t know this for sure but I’m assuming Owen’s family didn’t get any of that. I don’t begrudge anyone that. That’s how art works. But it’s ironic to me that the subject communicated so much suffering she became an icon of the Great Depression. The  lines in her face is pure art by itself, yet she was not able to benefit from it.

Deep credit though, to Lange, for recognizing the art in those lines and using it to convey an image that many Americans did not see.

7. In 1978 Thompson wrote a letter to the Modesto Bee saying, “I wish she [Lange] hadn’t taken my picture. I can’t get a penny out of it. She didn’t ask my name. She said she wouldn’t sell the pictures. She said she’d send me a copy. She never did.” Although to be fair it was probably hard to find Owens, who was moving along with other migrant workers. And Owens did give her permission to be photographed. She probably didn’t realize how famous the photo would become when it was taken.

8. Kids want love more than anything. Owen’s Daughter Katherine says: “She loved music and she loved to dance. When I look at that photo of mother, it saddens me. That’s not how I like to remember her.” She also states that those times, though the toughest, were also the most fun.”

9. Lange went on to take many photographs related to the internment of Japanese Americans, an event that is horrific and seldom taught in the failing American school system. Teachers will teach about birds but not about when America began going down the road towards potential facism.