3 Habits To Transform Your Life Completely 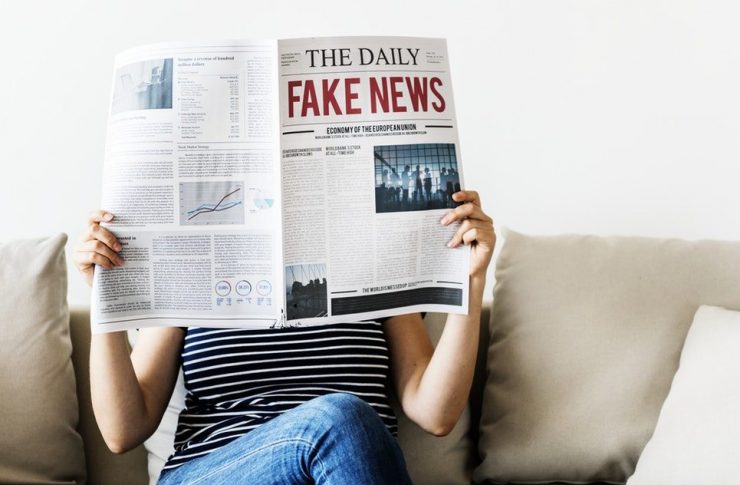 “If you don’t change, within 11 months you’re either going to be dead or in jail. Probably in jail.”

A friend of mine told me this.

Actually, I can think of three times, three different friends told me the exact same thing.

One time I lost money, which was very depressing to me when I had two kids to raise. I figured out how to kill myself but… I always put it off to the next day fortunately.

Another time I got someone pregnant and I could barely take care of myself, let alone two other people.

In each case, I had to pull myself together and change my life.

Reinvention is hard. You can’t just read a book about how to be a success and then suddenly be a success.

The first key is to “cleanse”. This is not like a juice cleanse. It’s like a life cleanse.

Then you are ready for what it takes to reinvent your life. But first… the three habits below.

I used to read four newspapers every morning. And then I would read about a dozen or so magazines a month.

I thought I needed to stay “informed”.

One time I was backstage while a TV news show was being produced. I had been a guest on the show many times and the producer invited me to come by one time and see how it was made.

It was a mainstream news show. Take the news of the day, invite some “experts”, and then have an anchor or two moderate.

At one point an assistant producer was whispering into the mic of one of the guests, “Now’s the time to argue.” This had also happened to me many times.

The producer leaned over to me and said, “All we are trying to do is fill up the space between advertisements.”

That is what TV news is.

I’ve written for many print news publications. The editor has a meeting first thing in the morning and says, “OK, how can we scare people today?”

That is what print news is.

I am not blaming the reporters or the producers. A video on Facebook might get 20 million views in a day. Local TV news is watched by about 50,000 people a day.

The numbers are dwindling so reporters have to be more and more sensational to get people to look.

And what about quality reporters? They are leaving.

One time I was sitting down with the managing editor of one of the top four newspapers in the country.

He said to me, “I’m having a big problem. My best reporters are getting huge social media followings and they want raises. I have to fire them because everyone should be a team player. Nobody should be a brand by themselves.”

So he fired his top reporters. And then he was fired.

But that is the direction of quality news. It doesn’t inform. It sensationalizes. It isn’t unbiased. It tries to persuade. It isn’t quality writing because it has to turn around so fast.

The hour or so a day I used to read the news I now use to read quality books.

I start the day reading quality fiction, quality nonfiction, and usually a book about games.

Quality fiction because that’s where the best writing is. When I read quality writing, I become a better writer and communicator.

Also, quality nonfiction is really how to be informed. If the news today is about tariffs, I’d much rather read a history of tariffs over the past 500 years to form my own opinion of what’s good and bad.

If the news today is about AI stealing jobs, I’d rather read a book explaining more about AI trends and other attempts through history at a universal basic income and what happened.

If the news today is about Kim Kardashian (as is often the case) or the latest Donald Trump tweet, I’d rather read the biography of a hero of mine so I could see the habits behind true success.

And a book about games (chess, Go, poker, etc.) because I like to improve at things that are difficult and I love games.

Reading is about becoming a better person. “Being informed” happens when I overhear people talk on the subway.

[The image below is the “breaking news” on the front page of CNN.com. Should I stay informed?]

[Below that image is the table of contents from a book I read pretty regularly, Kahil Gibran’s “The Prophet”. I’d much rather “be improved” than “be informed”. ] 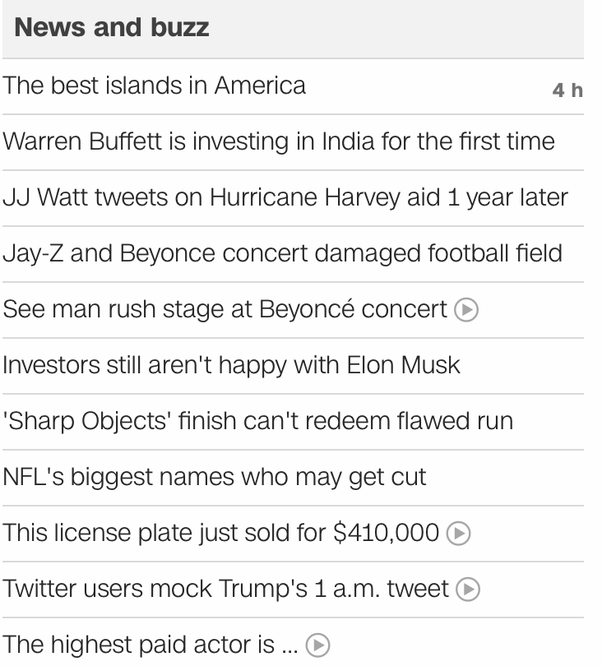 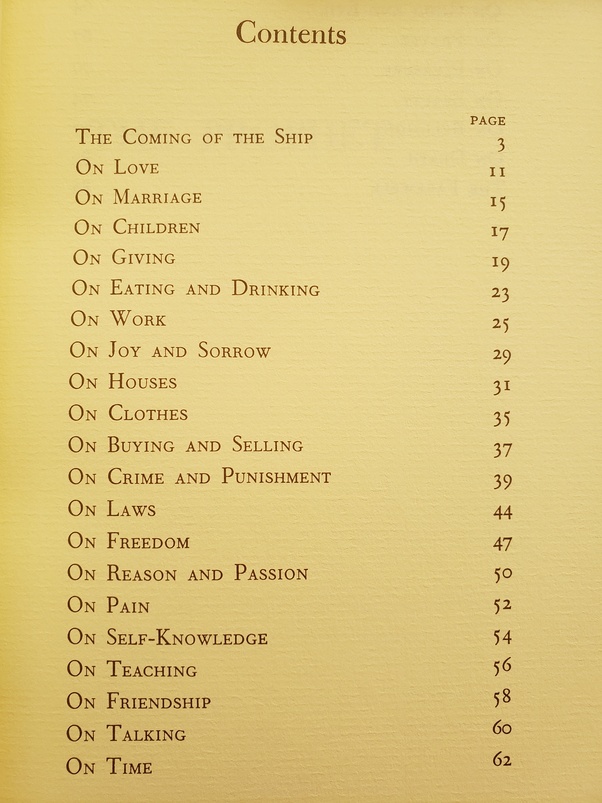 I read when Stephen King had a bicycle accident he couldn’t walk for a few weeks.

By the time he started to walk he needed physical therapy because the leg muscles atrophy so fast.

But, even worse, he couldn’t write. After just two weeks out of action, his “writing muscle” had atrophied. He had to write every day to build it back up. And that’s Stephen King, one of the bestselling writers of all time. And one of the most prolific.

Ideas are the same way. Each of us has an “idea muscle”.

It atrophies very quickly if we don’t use it. At least, it atrophies for me. I become dull and I can’t come up with ideas or be creative.

I have written down 10 ideas a day since 2002, when I was at my lowest point financially.

I can’t say I’ve done it every day since. But the periods where I have not done it I’ve lost money, lost relationships, didn’t improve myself, missed opportunities, and was an all around loser.

Here are some types of ideas I write:

For instance, I once wrote to all my heroes in the investing business. Warren Buffett, George Soros, etc.

I got zero responses. ZERO! Because it’s not like Warren Buffett is going to say, “Hold everything! James Altucher wants to buy me a cup of coffee!”

I got three responses:

Because of this list of ideas I’ve visited Google, Amazon, LinkedIn, and many others. I’ve sold businesses. I’ve written books.

How long does it take to build the idea muscle so you become an idea machine?

About three–six months. But it will take one week to atrophy so you have to keep doing it.

Do I keep track of the ideas? No, not at all. The entire idea is to exercise the idea muscle. 99.9% of ideas are bad. But if you exercise, some of the ideas will be good. But when I write these ideas down I expect most to be awful.

And yet… it just takes one to change your life.

[10 ideas for today: 10 Masterclasses I could teach. Again, the idea is not to have GOOD ideas. Just any ideas. And, who knows? Maybe one idea will muster it’s way to the top in the long run.] 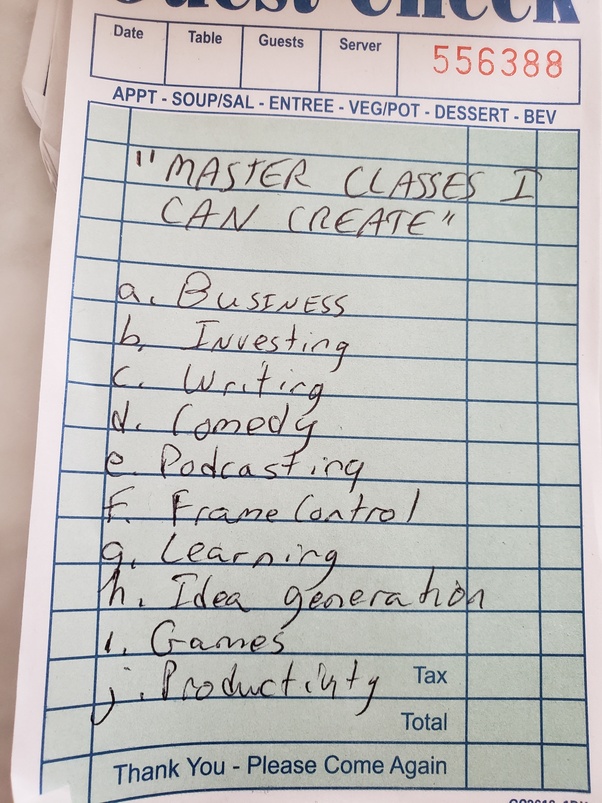 I’ve made millions of dollar because of this one habit.

Confession: I care what people think of me. I care too much!

So much “self-help” is about not caring what people think of you. Blaze your own path! Go the road less traveled! Be a unique voice!

But my brain rebels against that. I want to be liked. When I was a kid I was very unpopular. It’s hard to get rid of the need to be popular.

I had acne, glasses, braces, curly hair. I played chess all the time. I had one good friend but mostly people didn’t like me.

I was shy. I skipped school a lot because I hated everyone. Sometimes I’d get beaten up. I hated school. I hated growing up.

But inside me now I’m 50 years old with a little 13-year-old boy that nobody liked still whispering to me that nobody will like me.

When a woman wants to date me I almost can’t believe it. When a company wants to work with me I feel like I’m a fraud.

I try everything I can to get people to like me. I write books (so they can like me through my writing). I do stand-up comedy (so they can laugh at my jokes instead of laughing at me). I start and sell businesses (so maybe if I have enough money people will like me, although it’s never enough and this is the worst method to get people to like you. I usually go broke doing it).

When I start to date someone, I can feel myself outsourcing my self-esteem to her (and this is the best way to explain it but it happens in business, friendship, etc.).

I only value myself as much as the other person values me. I’ve given her the keys to my self-esteem.

It’s a constant battle. I think I’m winning it but the key for me was: 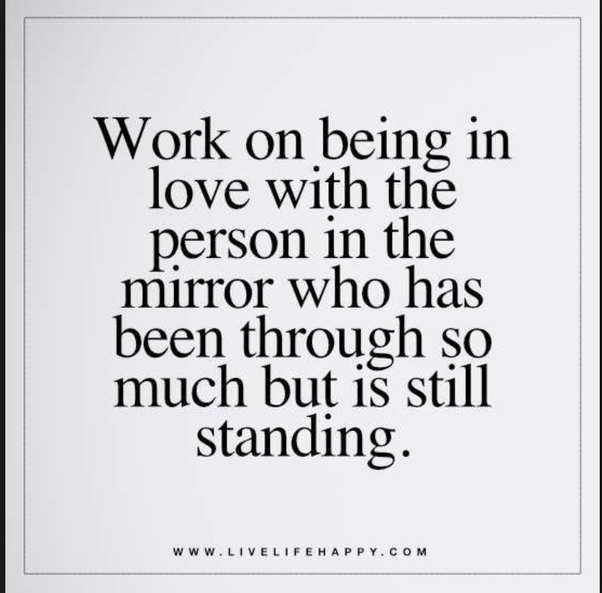 THE SECRET OF SELF-SABOTAGE

When you are anxious about what someone thinks of you (a date, a boss, a colleague, a partner, etc.) you can self-sabotage. Or… I self-sabotage.

The closer I get to something good happening, the more obstacles I throw in my way. Like I get too shy to go on a date. Or I try to impress too much. Or I take a worse deal in a negotiation, etc.

So awareness is key to stop the self-sabotage and then I get back to focusing on improving my life (10 ideas a day, being around good people, not lying, being healthy, respecting the lives around me, etc.).

We only have one life to get this right.

But that means we only have TODAY to get this right.

Tomorrow is not promised to us.

And these three habits are just the beginning.

When I forget them it’s painful. I usually end up in the road drunk. Or in a motel where police locked me up for a night. Or lonely with nobody to talk to. Or dead broke. Or all of the above.

But I had to start.

Today might be my last day. So I’m going to love the people around me.