The 5 Incredible Things To Do To Live A Charmed Life 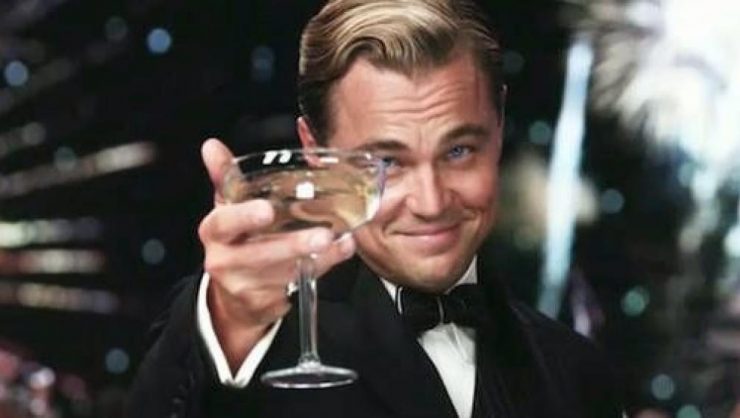 First, Jordan Harbinger was kidnapped by thugs in Serbia, taken to a warehouse, and his friend was beaten to pieces while Jordan talked his way out of death.

“Don’t ever get taken to a secondary location,” Jordan told me, “or you will probably die.”

Then he was kidnapped in Mexico. Even though we just spoke about it, I forget what happened. I’m glad I recorded it for posterity. I have to listen to my own podcast.

I have to remember things better. Sometimes I throw my all into something and then right afterwards I forget it.

I asked him, “You can talk yourself out of anything. How can I learn to do that? Can you give me five ways to be more persuasive.”

So he did. I was thinking to myself, “This is great I’m going to write these down as soon as I leave here.”

And then I forgot them.

One time I said to the producer of my podcast, “I saw this great book in the bookstore. Let’s get this guy on the podcast. I’d love to meet him.”

And she said, “Uhhh, you just interviewed him last week.”

That’s OK. Out of ego, I call myself a minimalist. So I keep minimal things in my head.

I was going to listen to the Jordan audio to remember the five things he told me so I can write this story.

But then Satoru was kind enough to make the graphic accompanying this article and then I remembered them. 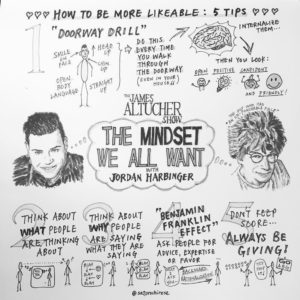 When you live life as if you are never going to die, then it doesn’t matter to remember any one thing. Time will disintegrate any one memory but that’s OK because things happen again and again.

Thank you, Jordan, for telling me the five secrets to becoming a Jedi Knight like you are.

FIVE WAYS TO MASTER THE ART OF CHARM:

Like anything, becoming a Jedi Knight requires constant exercise.

“You can practice,” Jordan told me, “by practicing these things every time you walk through a door. The doorway is the reminder that you have to practice.”

Every time you walk through a doorway, think of it as your mentor, your coach. Do these things:

a) Straighten yourself up. This is important to me. I tend to slouch. I probably add an inch to my height now when I walk through a doorway.

b) Smile. Even when you fake-smile, it lowers stress and anxiety. I need this. It’s better than a drug.

c) Head up, Chin up, Open Body Language. I don’t know. Just try it. It works.

I think if you fake “c”, then it won’t work. I imagine situations where I DESERVE to have my chin up and head up and then I really feel it. That’s the practice.

What’s inside you becomes like a pebble you throw into the middle of ocean. It ripples out and hits every shore.

2) Think about what people are thinking about.

Empathy is the currency that gets you assertiveness.

But you can only have empathy if you listen to someone’s concerns, their autobiography which they will gladly share, the sadness and horrors that have sculpted out the color of their eyes.

Then you can say, “These are not the droids you are looking for.”

3) Think about why people are saying the things they are saying.

Again, it’s not about you. Nobody yells at you because of something you did.

When you understand the rules of the game, you can play the game like a master.

When you catalog all the moves of all the other players and understand why they do what they do, then you can play the game better.

This is a muscle that atrophies quickly unless you exercise.

Benjamin Franklin understood a basic cognitive bias. I forget the name of it. Let’s call it the “Buried Treasure Cognitive Bias” because all of these cognitive biases have fun names like that but I am just making it up.

Basically: Young Ben had an enemy in the state legislature. Young Ben knew the enemy had a great book collection. Young Ben asked to borrow a book. He borrowed it and returned it.

Now the enemy became a friend for life.

How come? Because his brain said to him, “I am the type of person who does favors for Benjamin Franklin”. And that cognitive bias stuck with him for life.

The brain is sometimes a powerful computer (unlike any other computer, it can tell me if an apple tastes good).

But often it is is a very weak computer that can be programmed by others.

The Benjamin Franklin Effect, the Buried Treasure Cognitive Bias, is a way to do that programming.

My grandmother always kept track. “Twenty years ago he didn’t go to my grandson’s birthday party so we shouldn’t go to his cousin’s wedding.”

Once you keep score, you lose.

Life is long. Life is hard. If you keep score, it’s another weight on you. Just give when you can. Else the score will go against you anyway.

When given the chance, opt to be a good and kind person. We don’t always get chances and often it is too late to practice this muscle.

Just like eventually my leg and arm muscles will get weaker and weaker as I age, because of lack of exercise, so will the giving muscle unless I exercise it.

Giving is the most selfish thing you can do. Hence the amazing benefits you can derive from it.

Some things are better to forget.

I will never forget the horrible things.

Life is short. Life is long. Regardless, I am forgetting the past and I can only have hope for the future so I have to do the best I can right now.