The second time the police were called to pick me up I was fifteen years old. I was originally going to type “the first time” but then I realized that I had gotten in serious trouble one time before. But that’s another story. First I have to confess to my kids about it.

But back to this second time. I was with Robert Levinson and we had just gone to see Isaac Asimov speak. We were both fans of Asimov. I loved his “Foundation” series. The series is about the decline of the Galactic Empire and a group of people who use statistics (“psychohistory”) to determine that the decline will last 30,000 years and so they need to store up as much intelligence as possible before the end comes. The series was three books and written in the early 1950s and is still a great series. I reread it in 2003 but more on that in a second. His other major series, that I was not really interested in, resulted in the movie , “I, Robot” starring Will Smith:

I can’t remember what Asimov spoke about. It was the first time I was in the room with such a personality and I think I was overwhelmed by it.

Afterwards, Rob and I went to Rob’s house. He had just gotten a mo-ped. I had never ridden one so we were riding around on it when the police stopped us and asked if I was “James Altucher”. If the same thing happened to me now I know my auto-reflex answer would be, “No, but  I think I saw him going in the other direction.”

In any case, my grandparents had called the police when I didn’t report in instantly after the Asimov talk. There were worried I had gone and joined some Asimovian cult, as if there were one. They couldn’t stop talking about it all night. I only wanted to ride a mo-ped for ONCE IN MY LIFE.

I wasn’t even that into science fiction other than that Foundation series and a few stories. I was more into the Fantasy Genre.Tolkien and Zelazny were my heroes. Not Asimov.

But I recently read his memoir and some of his shorter works and it brought back memories and how much I really learned from him: 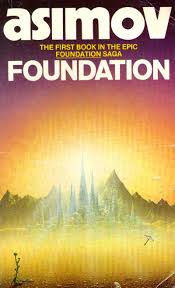 A)     Prolific-ness. Asimov wrote 467 published books. Some of them were anthologies. But even on those he wrote in-depth intros and intros to each story. Most of his books were non-fiction which I think he viewed as easier than novels. He estimated that after the invention of the word processor he published 1700 words a day on average. Most people have a hard time writing even 500 words a day, let alone 1700 words a day.

So I’ve decided. I want to write a 100 books. As long as I have something to offer I’m going to try to write at least 1000 words worth publishing each day. A lot of great authors sacrifice quantity for perceived quality. Like Thomas Pynchon’s meager portfolio of books or JD Salinger’s. But Asimov shows you can do both (and I would take the Foundation series over Pynchon’s “Gravity’s Rainbow” any day).

B)      A sense of Wonder.  In his memoir he writes that his favorite short story that he wrote was “The Last Question.” I couldn’t remember whether or not I had ever read it. I went to the bookstore at the Grand Central train station in NYC and picked up a collection of his stories. On the trainride I noticed “The Last Question” was in it so I started reading. Within a few lines I remembered – I had read it at least thirty years earlier. And I even remembered what the last line of the story was going to be. And it was true. It was his best story. It was one of my favorite stories ever and I had constantly recalled it over the past thirty years even though I had long forgotten the title. It was beautiful, and re-reading it again brought back that initial sense of wonder I felt thirty years ago.

I felt like a 13 year old again. It washed off all the sense of dirty responsibility I have now – to family, kids, bills, colleagues, investors – to myself and the goals I’ve set for myself now that the hopes of youth get tinged with regret and the regrets I’ll feel in the future are my meager hopes now. What goals? What hopes? They all disappeared for a split second into that last line and into the question that spit it out – The Last Question.

C)      A Group to Grow Up With. In the 1940s, my three favorite science fiction writers: Isaac Asimov, Arthur C. Clarke, and Robert Heinlein (probably my favorite of the three), were “the big three” of science fiction. They were the three best then and probably the three best ever. And they were all friends who challenged each other, competed, saw each other whenever possible, and built up a companionship with each other that lasted for decades. It reminds me of how Burroughs, Kerouac, and Ginsberg formed a literary bond that became the Beat Generation of writing. In almost any science, art, culture, literature, you can find these groups. We won’t know now, or for decades even, but I wonder if the same thing will happen in the relatively new genre of “blog-ature.” Doing more with a blog than “10 tips to get more blog users” or “Here’s what happened today to my five year old.”

A good quality blog post has particular qualities that make it different from any other literary genre:

When I write “10 reasons to quit your job” its not because I want you to quit your  job. It’s because I’ve had jobs and they have made me sick: the backstabbing, the subservience, the insignificance of being one cog in a meaningless machines that grinds away to produce…what? More Americana? Who did I help? Who are you helping?

D)     Humble Vanity. Asimov has a quote in his memoir and I can’t find it at the moment but he basically says, “I’m the most brilliant man there is. And this is not being vain. It would only be vanity if you can find someone more intelligent than me!” And he’s only half-joking but then throughout the book we see that he is horrible at chess, not the most smooth with women, not the best husband or father, and on and on he admits to all his foibles while still grasping onto his one trophy, that he’s is basically thebest at whatever he wants to be the best at. And why not think that way? Why suffer from a false humility which we all know is the worst kind of vanity. His vanity is honest and earned. But he is also half-joking because he doesn’t care what we think. But he does care! Its only a half-joke. Which makes it even more funny. Or not. I don’t even know what I’m saying anymore. But you get it. I got it.

E)      Trading. Yes, Isaac Asimov saved my financial life. I was losing everything I ever worked for. I needed to make some money. I had a lot of time on my hands because I had no job. The dot-com boom had busted. Nobody would even talk to me or have anything to do with me. I had been a quick solar flare in the supernova of dot-com finance and now I had been absorbed back into the black hole at the center.

So I re-read the “Foundation” series by Asimov. The premise is that with the use of statistics (he called it “psychohistory”) you can gather up all the prior history and use it to predict the future. So that’s exactly what I did. I loaded up all the historical data of the stock market into some software and wrote programs to figure out what would happen next. So, for instance, what happened the prior 90 times that MSFT opened up 5% down? Oh, if you buy at the open, then 89 out of 90 times it went up 2% before 10am. Ok, I’m a buyer. And that’s how I would do all my trades and made money almost every day trading for the next three years.

During this time I went to Las Vegas to visit with Jack Binion, the owner of BInion’s casino and a bunch of riverboat casinos on the Mississippi. A stayed at his house and it was the first and only time I was ever in Las Vegas without staying at a hotel. He was in the process of selling all his casinos for a cool $3 or $4 billion. I wanted him to invest some money with me.

I remember three things about that visit, other than that Binion ultimately did not invest with me:

Asimov’s dead now. Unfortunately dying of AIDS from a blood transfusion. And my grandparents are dead. So they can’t call the police on me anymore (twice was enough). Jack Binion sold all his casinos and made billions. Rob Levinson graduated from mopeds to now doing highly specialized mechanic work on fancy race cars. I don’t daytrade anymore.

But I still want that sense of wonder that hit me for only a few moments in my childhood. I want it back. I want to know the answer to the Last Question over and over again, forever. I want it now. I don’t want it to ever leave me again. 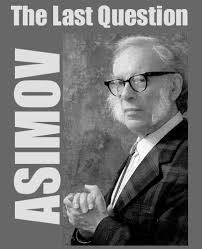