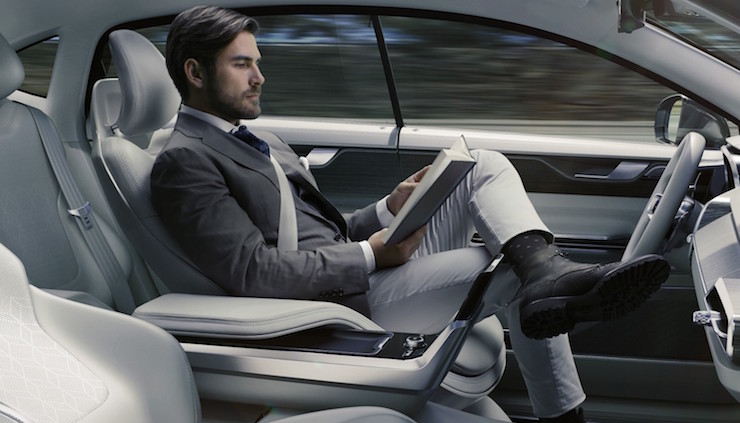 I don’t like thinking about the future too much. It makes me nervous. Dwelling on things you don’t know for certain is a surefire way to give yourself heartburn. At least it is for me.

That’s why I don’t really like making predictions about the future. There’s always a 50/50 chance I’ll be wrong.

But whether we want to think about it or not, the future is kind of the only thing we CAN think about. Unless you want to live in the past. In which case, you’ll be one of the people left behind.

Here’s the one thing we know for sure about the future. Innovation isn’t going to stop. The world has problems. Smart people are working on solving those problems. And they will succeed, like they always have.

And these innovations will change the world.

One of the biggest innovations making headlines right now is driverless cars. When I was at Google a little while ago, I actually stumbled into the room where they were developing these cars. Security had to escort me out.

Here’s what I expect will change as a result of driverless cars.

It’s plausible that within 20 years, nearly all the cars on the road will be driverless, which means that 90% of the automobile industry might be out of work at that point.

Sure, some people will still own cars; car ownership is about more than transportation for a lot of people. Those car sales won’t go away completely, though many will transition into driverless car sales.

But here’s the thing: Every time a market disappears, a new one has emerged. When we switched from horses to cars, people in the horse industry moved over to the car industry.

So what will the new industry be? For one thing, car designs will change. Also, solving problems that arise in the technology (which is inevitable) will also be a major need.

The number of car accidents will go down once human error is taken out of the equation—many experts estimate by up to 90%—and this is going to be confusing for insurance companies.

That said, no technology is foolproof.

Just recently, a Google self-driving car caused its first accident, after over a million incident-free (or at least not at their own fault) test miles. Sure, the car was going 2 mph when it collided with a bus, and no one was injured, but it happened, and it will inevitably happen again. At some point, a driverless car will kill someone.

But who’s at fault when there’s no one behind the wheel? And in the case of collision, will driverless cars be designed to protect the driver or save the most number of lives? These questions will need to be answered and regulated. Whoever figures that out will make millions.

Really any jobs that require drivers—pizza delivery, snowplowing, taxi driving, public transportation, long-haul trucking—will change. Why pay an employee for something that a machine can do for free?

This is going to be a side effect of the changes to the transportation industry.

Businesses that cater to truck drivers, or that strategically locate themselves off the side of highways, will inevitably be impacted. Think 24-hour diners, truck stops, motels.

Without truck drivers on overnight excursions or travelers needing to stop for the night, the market for these businesses will drop quickly.

Driverless vehicles have endless potential in the military from transporting soldiers, to serving as decoys, to sweeping for IEDs without casualties.

As for law enforcement, police will be able to focus attention their away from traffic violations and drunk driving, and direct those resources elsewhere.

That said, there’s an interesting side effect that will take place here. Tickets from traffic violations are a major source of revenue for many towns, and that will go away almost completely when driverless cars take over. How will municipalities replace this funding source?

At constant odds with our desire for new technology is our desire to be off the grid. And because driverless cars, by virtue of necessity, will be entirely dependent on GPS technology, there will be more tracking data available than ever before. So privacy protection and data security fields will thrive as people look for new ways to have the best of both worlds.

Profiting from the trend

Whether or not you’re the guy who figures out how insurance is going to work or how to direct market using the technology, that’s OK. There are still ways for you to win from this trend. The best way is to invest in the companies that are going to solve these problems.

Alphabet (GOOG): It may seem obvious, but Google is already a million miles ahead of its competitors in driverless cars. Plus, it doesn’t hurt that they already have their thumbs in about a trillion other pies, like online advertising and data gathering. They’re going to be the titans of industry here, no question.

Tesla (TSLA): Tesla CEO Elon Musk has said that his company is working on producing its own driverless vehicle as early as 2017. And this is the guy who’s trying to launch people into space, so I have very little doubt about his ambition or ability to deliver.

Baidu (BIDU): The Chinese search giant recently announced a partnership with BMW to release its own self-driving car, which they say could be out by the end of this year. Their technology is more to assist drivers rather than fully replace them, which may be a smart place to start as a transitional space for drivers who aren’t ready to fully relinquish control.

Uber is currently a privately held company, so there’s not a whole lot you can do to directly invest it in yet. But if Uber ever goes public, the opportunity here would be staggering. This is a platform that will continue to grow and flourish in the driverless car economy. Keep an eye out for companies that provide to Uber or its competitors like Lyft.

Are other companies helping them to develop software or new services? Which companies are using UberRUSH to deliver to customers? (There are over a dozen.) Who’s partnering with Uber? (Spotify is one example.) Keep an eye out for these kinds of backdoor plays.

(Note: My 9 backdoor investing checklist. Get it here.)

And speaking of competitors…

You’ve probably heard of Lyft, and sort of in the same sphere is Zipcar.

OK, China had its own ridesharing service. So?

Well here’s where it gets interesting. Despite the fact that Uber operates globally, and Didi Kuaidi only in China, the latter is actually putting out bigger numbers. In December 2015, Uber announced that it had officially booked over one billion rides since its inception in 2009. Didi Kuaidi, on the other hand, had booked 1.43 billion in 2015 ALONE.

As a disclaimer, it’s a little unfair do a side-by-side comparison, since Didi does operate seven transit services, including bus and enterprise services. Still, the company commands over 87% of the ride-hailing industry in China, a country with a population of 1.36 billion, which is about 20% of the GLOBAL population. So we’re talking a big potential market, even if they never move outside of China.