I was first called “Charlie Brown” in 8th grade. I refused to stand up and say the Pledge of Allegiance with the other kids. I didn’t like being forced to do anything. Afterwards some kids came up to me.

“Hey Charlie Brown,” one of them said, “you a commie?”

“He’s more like a Linus,” Larry Sorbino said. Having stayed back a grade or so he was having more sex than anyone else in junior high school. I was definitely jealous of him. Everyone laughed because he was the leader of the roost. “Linus, hahaha.” And then for the next few months people would pass me in the hallway and sneer, “Hey Linus, haha” or, when they forgot who Linus was, “Hey Charlie Brown, haha!”

Since I was about 4 years old I had been buying the Charlie Brown collected strips. Usually after a doctor’s visit my mom would get me a book of the strips. I was thinking this the other day because I took my kids to Friendly’s. The waitress came over and said, “what would you guys like?”

“Well,” I said, “first off, about 38 years ago I left a Charlie Brown book in a Friendly’s by accident and when my mom and I came back to look for it it was already gone and I’m wondering if since then anyone has reported it lost or if it’s maybe in the lost and foud.”

“Daddy!” both my daughters said and they were embarrassed. Why’d they have to have a daddy like me? Even Claudia said, “oh no.”

“But,” I said, “I’m serious. I really wanted to read that book and my mom had just gotten it for me. We were coming from the doctor’s office. I had a vaccine shot then. I needed Charlie Brown.”

Charles Schulz, the creator of Charlie Brown, wrote the strip from 1950 to 2000, just about every day. He was basically a blogger. I don’t even know if he missed a single day.

It’s hard to come up with ideas that are meaningful every day. But he did. Here’s 7 things I learned by reading his various biographies and also by probably reading every strip he every produced.

1)      He made over a billion dollars in his lifetime.  Nowadays when we think of a billion dollars we think of a guy like Mark Zuckerberg or the Groupon guys, who seem to have made a billion dollars overnight. We get jealous (I do) and think, “I could’ve done that. These guys got lucky.” But Charles Schulz showed that through recessions, stagflation, wars, high taxes, low taxes, whatever –  persistence and making sure you’re creative every single day so each day you outshine yourself and your peers a little bit more, will get you a billion dollars. Creativity every day is the key part.

2)      He had a creative process. I may have mentioned my own process before.

–          My process:  I wake up around 5am, give or take. I drink 3 cups of coffee and by the third cup I’m at the computer writing.  I read for about an hour – only strong autobiographical voices (fiction or non-fiction) [See, My Summer Reading List], then I write a blog post. I write at least a post a day even if I don’t post every day. It takes me anywhere from a half hour to eight hours to write a post. A typical post is 800 – 2000 words.

–          Charles Schulz’s process: He woke up and ate a jelly donut. Then he’d try to come up with an idea, a process he said took him between a few minutes to 3 hours. Then he would draw and ink up the strip, which would take up to another three hours. He “posted” every day, 7 days a week.

I think creativity doesn’t happen spontaneously. I think the key is persistent exercise of the creative muscle. Doing the same process every day so your brain and body expect it and know what to do once you are “in process”. That makes the possibility of having spontaneous GREAT ideas come out during those hours much more natural and easy. [See, Nine ways to light your creativity ON FIRE]

3)      Success happens over decades. I said this in #1. But it’s a specific point also. Charles Bukowski wrote for three decades before he was able to make a living at it. Charles Schulz built Charlie Brown into a powerhouse over the course of five decades. For the first two decades of Warren Buffett’s investing career, nobody knew who he was. Now he’s the richest man in the world. [See, 8 Unusual Things I Learned From Warren Buffett]

This is a hard thing for me to learn. I’ve been on and off writing for two decades, writing professionally for one, but only blogging for less than one year. And sometimes I’m really impatient for traffic, etc. But I don’t even quite know what it is I want yet. I’m very confused on this point. The only thing I know I want to do is write / post every day and build community around the posts. Schulz ultimately drew 17,897 strips. One critic said that its arguably “the longest story ever told by one person”.

4)      He loved what he did. I don’t think real success could come any other way. It seems like the formula is passion + creativity + persistence + process. When sickness was forcing him to retire (about a year before his death) he said to Al Roker on the Today Show: “”I never dreamed that this would happen to me. I always had the feeling that I would stay with the strip until I was in my early eighties, or something like that. But all of sudden it’s gone. I did not take it away. This has been taken away from me.””

Here’s the last Charlie Brown strip that appeared. It came out on February 13, 2000 (the day after Schulz’s death) 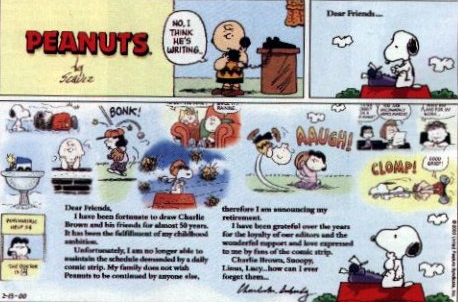 5)      He had a stance and wasn’t afraid to state it. I’ve seen over and over in my blog posts that people are afraid to even remotely THINK anything that’s outside the box that society has built for us and put us in. Schultz was always trying to step out of that box and because he did it under the guise of sweet looking children, hardly anyone noticed.

For instance, 50 years before our constant worries about Google and Facebook privacy Schultz introduced a minor character named “5” (who had sisters “3” and “4”) whose last name was his zipcode. Apparently “5”’s father was protesting that everyone now is being boiled down to just a number, taking away our individuality and privacy. Here’s the first strip with 5:

Charlie Brown is not a bad guy. He’s a very sweet little boy. He tries to do good things. He wants to kick the ball, to get advice on how he can be better, to have more friends, to even have a girl (“Heather, the little red-headed girl”) love him. But he rarely gets what he wants. And yet, with 350 million readers worldwide at his peak, he’s one of the most beloved characters of all time. Nobody wants to read about the kid who wins every game. We all relate deep down in our hearts to the person who is isolated, a little lonely, who wants something better out of life than the cards that have been dealt him. Not that everyone is depressed. Charlie Brown is not depressed. He just loses. And so do I. And so do you. We’re all in it together to try to be a little happier in a world that’s just a little too tough on us.

Focusing on these darker elements in life, and examining them in almost 18,000 strips, is how Schulz defined his characters and shaped his stories. Don’t brag to us. Tell us how you tried to kick the ball and failed. Ultimately, Charlie Brown’s innate kindness is what caused the other kids to rally around his choice of a sickly tree in the Charlie Brown Christmas Special. Being kind against all struggles creates art, friends, beauty, happiness.

7)      He worked 100% of the time. Even when he wasn’t actively engaged in his process of drawing, he was constantly thinking of ideas and thinking of new ways to draw. This, despite the fact that on the surface the strip seems relatively simple to draw. In Schulz’s own words:

“While I am carrying on a conversation with someone, I find that I am drawing with my eyes. I find myself observing how his shirt collar comes around from behind his neck and perhaps casts a slight shadow on one side. I observe how the wrinkles in his sleeve form and how his arm may be resting on the edge of the chair. I observe how the features on his face move back and forth in perspective as he rotates his head. It actually is a form of sketching and I believe that it is the next best thing to drawing itself. I sometimes feel it is obsessive, but at least it accomplishes something for me.”

I look at his lifetime and I’m jealous even though he’s dead and I’m alive. He did the only thing he ever wanted to do, he had an audience for it, he made a lot of money doing it, he never got burnt out, he said what he wanted to say, and he said it every single day. I hope I’m so lucky

When I was a kid I would be really upset at the other kids who called me “Charlie Brown”.  But now I’m thinking it wasn’t so bad after all.