Today is 40 years to the day after Louis Armstrong’s death. I saw this photo of him. What the hell is a little kid who used to play trumpet at brothels in New Orleans, abandoned by his dad, his mom a prostitute, shoveling coal in his early years, trumpeting in front of the Sphinx in Egypt with his girl just lazily listening to him go at it. Is this just a dream? Can life be lived so large? Have I been able to live life so large?  To live to my fullest potential.

Life is truly owned by the people who dive into it, and make every experience special and unique. The masters of the world don’t let the oppressors, even our internal oppressors (who are the worst of all), drag us down. Instead, they create out of thin air the experiences, the situations, the magic that constantly exists around them. I want to be such a magician. 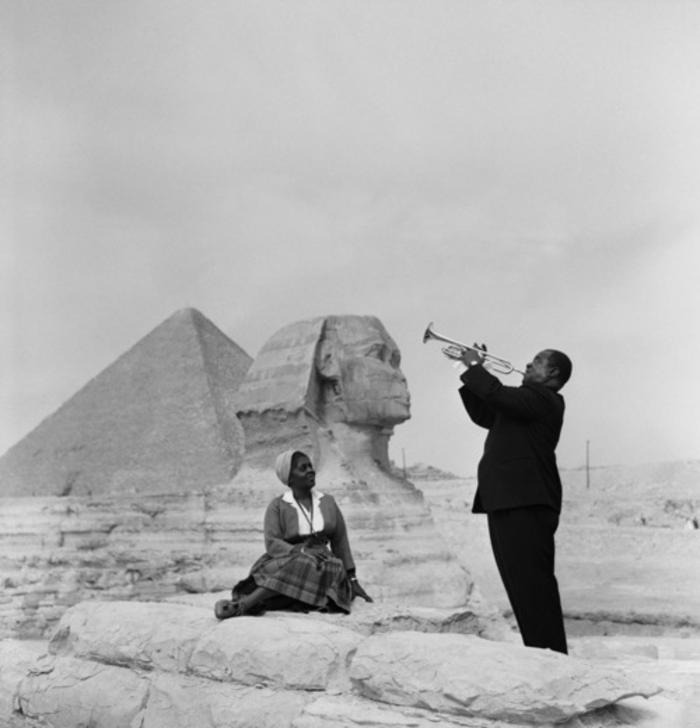 I hate jazz music and even though Armstrong might not be jazz I sort of lump him into that category. I remember pompous college students pretending to play an air drum while listening to “fusion jazz”. You know who I mean. The funky glasses, the guys talking about James Joyce or Thomas Pynchon’s Gravity’s Rainbow. The ones who were always laughing as if all the world was a joke being played on you but not them. I get it, though, that “blues” is not jazz. I get it that Louis Armstrong was not part of the pompous movement in jazz. And the photo is so beautiful it makes me think of several things, particularly when you think about his background:

–          Cataloging pain is more interesting than cataloging pleasure.  Its the moments when I’ve been so down and out I thought I would never be able to raise a family, find someone to love, start or sell a business, lose a father, lose a friend, lose a marriage, and on and on that I thought to myself: if I don’t figure this out, I’m going to just die disappear detonate. And I’d figure it out. And its one more notch that lets me LIVE. And it’s the moments when I’ve had the most pleasure that I’ve always managed to blow it, to lose my mind along with everything else.

–          Louis Armstrong took his early pains and processed them into music. Some of those pains: father abandoned the family when he was a kid, his mother abandoned him then became a prostitute, living through the Great Depression. I can’t even imagine. When I was five my mother threatened to me she would “run away”. She was joking, or just having a one day phase but 40 years later I still viscerally feel the terror in my body at the thought of it. Imagine actually living the terror day after day. He was totally abandoned. He worked as a little boy hauling coal to the red-light district of New Orleans where he first got his exposure to music, listening to it coming out of the brothels. And on and on. You don’t have to turn pain into music. But turn it into something. Write. Write ideas. Start a business. Get a job and blow that place away while you plan your evil plan of escape. Start today.

–          Have a sense of surrender. He was Jewish. Sort of. A jewish family took him in and treated him like their own son, knowing he was abandoned on every side. He wore a star of David around his neck for the rest of his life. We hang onto whatever we can believe in that gives us some sense of peace. It doesn’t matter what it is, whether its Buddha or Jesus or Moses or the yoga sutras. Something needs to give us a little bit of hope that there is something better out there than the spider webs gathering in the musky attic of our head. Every day I wake up and look out the window and say to whatever it is outside myself, “help me save a life today”. I don’t know who I’m saying it to. It doesn’t matter. Maybe there’s nobody out there. But it takes me out of my own worries and anxieties for a split second. It doesn’t require faith but a tiny amount of surrender. Ask this every morning about your friends, your lovers, your employees: how can I help them just a little bit more, with the simple resources I have.

–          Constipation is the root of all evil. Armstrong was obsessed with laxatives and even tried to invent a few. Really if we want to live forever, our intestines, kidneys, liver needs to be as clean as possible, however we can make that happen. Why live with shit backed up into our bodies until it touches our heart and brain? Armstrong purged as much as possible. Keep the inside of the body clean and the music that comes out of it will be clean. He even tried to teach the Queen of England this simple concept but I’m not sure if she listened.

–          Learn all of the history of your chosen field. I always wonder why all crappy bands sound the same but the bands that make it through history (whether you like them or not: the Beatles, U2, Led Zeppelin, Rolling Stones, etc.) have such unique sounds. Part of it is by studying as much as possible the entire history of your chosen field. I keep telling my kids: if they want to learn to sing, or to tap dance, or draw manga comics, or to do anything, use YouTube or whatever to learn everything you can about all the masters in your field over the past 100 years.

Learn all of their styles, learn how to mimic them, learn their styles better than they knew them and what influenced them. Be able to recognize them at a moment’s glance. And only then will you start to develop your own unique style, which you can only then begin to master. Louis Armstrong did this, studying every musician he could, working with every musician he could, blowing on the trumpet every day for 60 of the 70 years of his life. That’s the only way to get good. To be better than the other six billion people on the planet who would like to be as good as you would like to be. How can you compete against that? Only hard work backed by true, sincere passion.

That’s how you become a magician, blowing music in front of the Sphinx.

–          Flexibility. Armstrong moved from trumpet to trombone, storytelling, singing, and so on. He made himself useful in every circumstance where music was wanted. He wouldn’t let “I can’t” slow him down. “I can’t play that instrument.” “I can’t sing.” He could do anything. He said “yes” to everything and then he became the best in the world at it because he knew how to become the best at something. You can only be good at so many things. But don’t limit yourself too much either. Always be looking for new opportunities to improve incrementally.

–          There’s always opportunity. In the Great Depression, every opportunity shut itself down. The money had run out. Some of Armstrong’s compatriots went back to New Orleans to raise chickens or to just disappear into factories or famine. Armstrong went to LA to play at the “Cotton Club”, drawing in the Hollywood crowd that was only vaguely aware that the rest of the country was in a Depression. There’s always money somewhere. Every day I hear too many people complain that the world is going down. Its not. Its not worse than the Great Depression when WW II started and everybody was down and out. And here’s someone who had every aspect working against him: poor, black, broken family, lost his job, hungry, a nationwide Depression, etc and he still built an amazing career on the back of that.

Armstrong died 40 years ago today. I barely know anything about the man. But I wish I could be 1/10 the survivor he was. Today I’m going to try.