In 2003 I really disliked Warren Buffett. Like, I personally hated him.

After 9/11 he stated “We’re going to have something in the way of a major nuclear event in this country. It will happen. Whether it will happen in 10 years or 10 minutes, or 50 years … it’s virtually a certainty.”

Everyone on TV nodded their head. Why not. The man is bigger than Jesus.

But listen, WB (we call each other by our initials when we whisper softly to each other) charges people for insurance AGAINST NUCLEAR ATTACKS.

If I were a door to door life insurance salesman you know what I would say to you? You can die tomorrow! Why not protect your kids just in case?

And I don’t like when people, even Buffett, spread nuclear panic.

Even in his latest shareholder letter he is talking about nuclear attacks.

But I forgave him. We hugged it out… sort of. But he still won’t pick up the phone when I call him.

In 2003, I went to Berkshire Hathaway’s annual meeting in Omaha. The Buffettpalooza. I think 20,000 people were supposedly there. No exaggeration.

People got on line at 5am to get into the meeting. Krispy Kreme donuts were served on the line outside. Then, when it was time to go in, everyone RAN in order to get a good seat. But since they had just cleaned the floors everyone was slipping, falling, sliding as soon as they got into the building. It was exactly what would happen if everyone was running to escape, well, a nuclear attack.

The night before the meeting there were some parties.

I got invited by pretending to be “media.” I got a special badge.

I met a guy who told me a story. He bought 200 shares of Berkshire in 1976. The shares doubled in a year or so and he got nervous. So he sold 100 shares and used the proceeds to start a restaurant.

The other 100 shares (assuming he still holds them because he told me he was never going to sell them) are now worth $18,000,000. So its safe to say that this guy I was speaking to is the world’s greatest investor ever. He bought 100 shares and never had to even think again about anything.

He could’ve watched MTV and eaten nothing but Pringles for the next 35 years. And now he’s got $18,000,000 in the bank. But he has big regrets. Because he sold those other 100 shares on only a double.

Oh well. We have some work to do here about this article. Because its not easy to find unusual things about Warren Buffett. But if you didn’t notice the picture above, I wrote THE book on Warren Buffett (even Buffett said so).

I really did drive right up to his house in a cab. Here’s his house: To me, that shows a lot of discipline. Every time in my life I’ve ever made money I would make the  mistake of buying a home.

Here’s a story about Buffett. He’s playing golf with a bunch of people and they all bet a dollar on a particular hole. Buffett won’t bet. “Why not, Warren?” they ask him, “you’re worth a gazillion.”

He said, “I never break my discipline.”

By contrast here’s the house of his bridge partner Bill Gates:

2) His worst investment ever

I asked this question on Twitter once. I asked, “where did Warren Buffett lose both his self-esteem and 20% net worth in that order.”

Everyone came back with very smart responses.

This is where he lost 1 billion dollars. In Conoco Philips, Warren lost not even 2% of his net worth (and certainly not his self-esteem).

No, the answer is a Sinclair gas station he bought in 1951 with a friend of his.

On the weekends he’d even squeegee people’s windows. But the Texaco station right across the street destroyed him.

He lost $2000, when his savings was about $9600 at the time. He put a lot of work and love into that little baby and it all went down the drain.

But that experience probably gave him the desire to have a more passive management style. A style he later mastered at Berkshire.

3) He was rejected from Harvard Business School.

If you think about it, Harvard must have a pretty bad reputation by now.

Bill Gates and Mark Zuckerberg hated it so much that they dropped out. And the one time they could’ve landed the best businessman ever, they rejected him.

Like most smart people, Buffett didn’t even really want to go to college.

He started out at Wharton but then switched back to his hometown college in Omaha because he didn’t like it. Then, after being rejected by the best business school in the country, he went to Columbia.

The reality is that people at the genius level (Buffett, Einstein, Gates, etc) have no use for college but some cases (Buffett) reluctantly go through the motions.

4) He was a victim of reverse anti-Semitism.

When he originally wanted to work for his mentor, Ben Graham, on Wall Street, Graham said, “no.”

Buffett was shocked and asked why. Graham told him it was because he wasn’t Jewish. Graham wanted to save a spot in the firm for a Jewish person. To be fair, Graham was worried that Jews couldn’t be hired anywhere else on Gentile Wall Street so he wanted his firm to be Jewish-friendly.

The key to success though is persistence. Buffett went back to Omaha but kept pitching ideas to Graham until Graham eventually hired him.

Persistence is the only sure-fire method for obtaining success.

Its useful to look at the history of the field you want to master.  When I was trading  for Victor Niederhoffer I saw that he had collected just about every finance book from 1800 on.

So I started reading books anywhere from 100 to 30 years old just to see what people were thinking and how finance and trading had evolved.

One book, “Supermoney” was by the pseudonymous “Adam Smith” detailing random adventures he had as a reporter in finance in the late 60s, early 70s.

On one adventure he decided to visit a retired investor (the book was written around 1972) who was trying to figure out what to do with the rest of his life now that he had $20 million after shutting down his hedge fund.

They drove around and had a rambling conversation. At one point they passed a furniture store and the investor pointed out the window, “I’m going to own that one day.”

Obviously, that investor was Warren Buffett. But Smith didn’t know then that he was dealing with WARREN BUFFETT because he wasn’t in all-caps yet. And, in fact, many years later Buffett did buy that furniture store.

I thought Supermoney was fascinating for its predictive abilities. How could Smith know that Buffett would be the best investor to profile? In the next profile after Buffett, Smith wrote about a guy who was sitting in a Swiss jail.

If you screw up a bank in Switzerland you are going to jail, no get-out-of-jail free cards. What was this guy doing while in jail? Trying to write some fiction. That’s where the profile ends. Paul Erdmann went on to become the bestselling finance thriller writer ever. I highly recommend his novels.

In any case, it’s a great chance to see how someone described Buffett before he became BUFFETT. I mentioned the book to Pamela van Giessen at Wiley  and she ended up republishing the book as a Wiley Investment Classic.

I give myself full credit on that one even if she disagrees with me.

This was a serious charge. And Buffett takes his reputation seriously. And the reality is (I won’t get into details but Janet Lowe covers it here), he WAS manipulating penny stocks and he sort of admits it.

But he had a good reason. He was buying a company and he promised a shareholder of the company that the price wouldn’t be lower than a certain number. So he made sure the price of the penny stock never fell below that number. Or something like that.

If I got the details wrong, Warren, you can put a gun to my head and fire the bullet. Suffice to say, the SEC didn’t know what to do with someone like Warren so they slapped him on the wrist (some historical versions say “the face”).

I’m sure he was nervous his reputation was going to go down the tubes but he survived to live another day.

Its not so bad to pick up the habits of Warren Buffett for a week and try them out:

Try it for one week: no computer, no cell phone, play a game for at least 12 hours for the week. 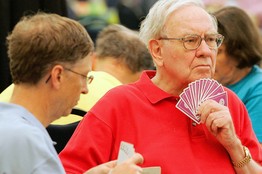 Ugh, I was going to do 10 of these but I’m getting tired.

There’s a fun story about how he actually took over Berkshire Hathaway.

It was more ruthless than anything JR Ewing would do. And I’m not going to mention the intertwining personal relationships he had. That’s well-documented everywhere. B

ut I give him credit for being open, unconventional, and living the life that best suited him with the least amount of stress. As his daughter, Susan, says: “Unconventional is not a bad thing. More people should have unconventional marriages.”

But, one thing struck me as interesting. The annual meeting is about eight hours long. I don’t recommend it to anyone. I can’t remember anything he said except one thing. Actually I remember something Charlie Munger (Buffett’s number two) said.

Something to the effect that long-term you better bury all your guns and valuables in the backyard and at that point Buffett shut him up.

But one thing Buffett said always stuck with me. Someone asked him, “How do you measure success?” And all 20,000 of us leaned forward to hear what the “magic number” was. But he said this: “I measure success by how many people love me. And the best way to be loved is to be loveable.”

And that, to me was the most unusual thing about Warren Buffett.