9 Things My Daughters Should Listen To Or Else!

My dad was a miserable failure. Really the worst kind of failure there is. He tried, he failed, he gave up.

He lost in everything. HIs first marriage blew up in his face when she cheated on him and the cops had to be called when he was doing something horribly embarrassing to himself.

I don’t know what it was.

I only know it was so bad that cops were called and that the cop that showed up was his elementary school bully and he said, “Seymour, is that you?” or something equally embarrassing.

Then he tried to be an ice cream man and, of all things, the “mafia” decided they owned the monopoly on the ice cream on that corner.

Then he worked in the NY Post Office. Then he got hired to do computer stuff and because he played chess and had no other skills at all, some company hired him.

Finally he started his own company and 20 years later it went bankrupt and he spent the rest of his life depressed and listening to music until he had a stroke and died.

A) Always have integrity.

B) Always do the work nobody else wants to do.

As far as I can tell, he always lived his life that way. I can’t say, “that was the secret of his success” because he had none. By almost every definition he was a failure.

But I don’t care. I loved him and I miss him.

Advice is ultimately autobiography. Don’t listen to people where the advice is coming from a pedestal. That’s how snake oil is created.

Nobody is on a pedestal. We all wake up scared and lonely and try to fill the holes in our lives with competence, with relationships, with freedom.

And then we sleep again and as we wake up the loneliness and fear swoops down again and takes over. At least for me. Every day I have to start from scratch.

I can’t give my daughters advice other than what I’ve learned. And most of the time, I hope they don’t listen to me. We each have to find our story.

But one day when I am dead from a stroke and they are missing me so badly they want to pay a zillion dollars to pick up phone and do anything to hear my voice just one last time, I hope they look back on these nine things because this is what I will tell them then.

Heck, this is what I tell myself every single morning. I never miss a morning where I don’t think about these things.

How do I know my kids will miss me? I don’t. Don’t predict the future or you set yourself up for disappointment.

Perhaps that’s the first thing I will tell them. And then they will one day die and so will their children. 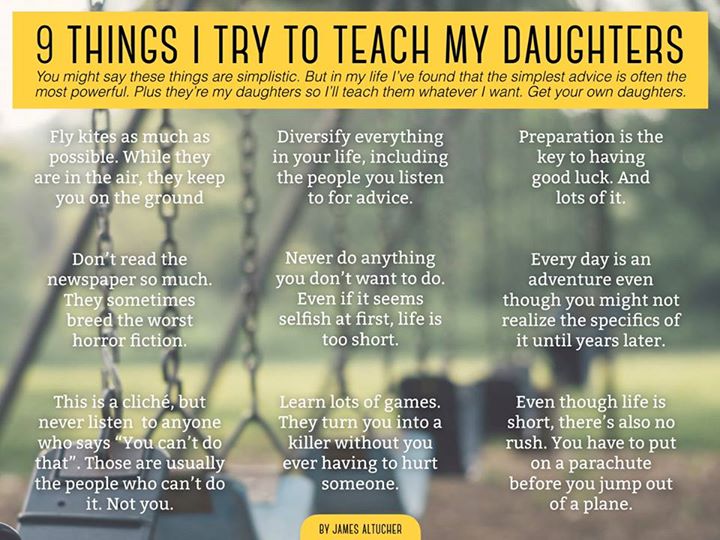