And Then Bad Things Happened

We were in the room when Claudia saw a roach.  A huge roach. I didn’t mean to kill it but I put a garbage can over it and it looked like I sort of only half got it because I peaked under the can and it looked squashed.

It was green, about 2-3 inches long, and it had big  legs. We were 41 floors up. How does a roach climb 41 floors? Maybe it was over generations. Like, its great great great great grandfather had been a pioneer in this hotel, starting in the kitchen on the ground floor. I was a little in awe of this roach. Claudia called downstairs to inform them of this amazing creature.

They sent up a two concierges and a team from security. Claudia kept saying, “I can’t even think about it” and then giving a nervous shake. She hates roaches. Would you blame her? She was in barefeet and it was her birthday. I think the roach crawled over her feet which is how she discovered it.

One of the security people (a lady, if you must know) lifted up the garbage can.

It was a roach with a red shirt.

“No, it’s not!” she said and the roach turned out to be only pretending to be dead.

It started running in a zig-zag motion, as if it were trying to avoid getting shot. Go Roach Go! The security lady stepped on it. “Now it’s dead!”.

She had a special tube. She had gloves on. She brushed the roach into the tube and sealed the tube. “And now it’s in this tube.” It’s like she surgically aborted the roach.

I was worried this entire scene was biting the funk out of Claudia’s birthday. The concierge asked, “We have to now clean this room. Do you want a similar room now or wait for a bigger room? No additional charge for the bigger room.”

“I’ll wait for the bigger room,” I said. I had to take everything up a notch in order to save the birthday. Claudia was still shaking.

We waited and waited in the lobby. No room. The bigger room was just not getting available. So now two bad things: the roach crawling over Claudia’s feet and the room not being available. We waited for about two hours. While we were waiting, we wandered around the hotel and we ran into Mike Lazerow by accident. He was attending a conference in the hotel. Coincidences are magic.

We came back and the room was still not available. It was now dark outside. The concierge came out. “I’m really sorry the room is not available so we found you an even bigger room that’s now available. Again, no charge for the additional upgrade.”

It was the biggest hotel room I’ve ever stayed in. We were given the tour of the room. Cole Porter had lived in the room for many years and wrote some of his most famous songs there. “Barack Obama stays in this room sometimes,” the concierge said. The room was about 3000 square feet. There was a grand piano in it. Later that night the concierge sent up a bottle of champagne but we don’t drink.

The next day it was pouring and disgusting outside. So roach, big wait for a room, big rain.

“I don’t want to go to yoga in this rain,” she said. New York City is ugly in the rain and it’s impossible to get around. So she did yoga in the dining room of the room we were in: 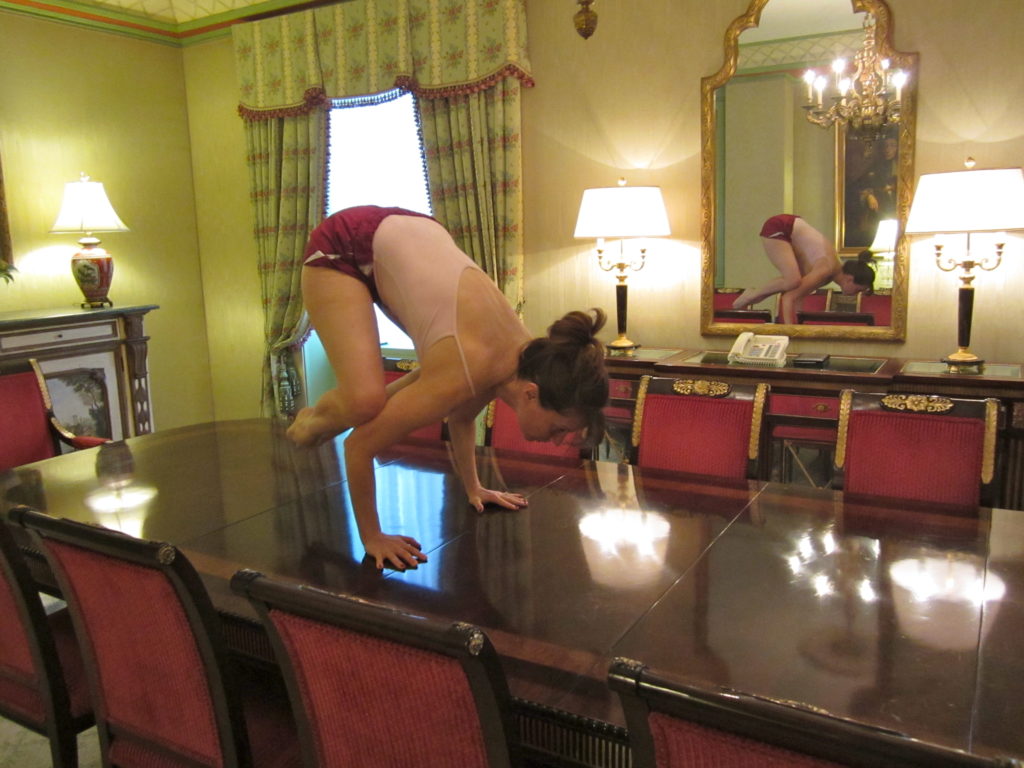 Roaches are ugly angels sent to protect us. Raindrops are the tears of a lost god. And all problems are just situations waiting to unravel their magic.