How To Beat A Traffic Ticket In 5 Easy Steps

The police were running after me and yelling “STOP!” I was sure I was going to jail.

I was driving the wrong way down a one way street.

I was afraid to stop because I had a suspended driver’s license and I had no registration in the car.

But I was afraid to get shot so I stopped.

“You realize you were going the wrong way down a one way street?” the cop said.

Ok, he said, let me see your license?

“Let me get this straight,” he said. “You’re driving the wrong way down a one way street and you have no license. Are you sure you left it at home?”

My license had been suspended several years earlier and I was never going to get it back again.

“Who is XYZ?” he said, naming the person I had borrowed the car from.

“I can’t believe this,” he said. “You have no license, this is not your car, and you were driving the wrong way down a one way street.”

I had been visiting my dad in the hospital after his stroke. On the way home I saw a police barricade and I got afraid so I made a quick right turn down this street, not looking at the street signs.

I turned the car around. I started to pull past the cop but then I slowed down and rolled down the window.

“Do you know how I get to New York from here?”

He looked at me.

“You have to be kidding me.”

We met five years ago. We were in a contest. 13 of us, including Joey, including me, Tim Ferrissr, Ryan Holiday, Lewis Howes, AJ Jacobs, and a few others, had to give 15 minute talks.

Then the audience would vote, “which talk gave the most dollar value to the audience.” The prize was $30,000

They threw out many ideas but none of them were good (“give out a dollar to every person in the audience”).

I gave my talk. I asked that the theme song to “Xanadu” would play while I walked to the stage (we all got to choose a song).

Everyone laughed during my talk from beginning to end. I thought I had this contest in the bag. I even announced I would be giving my $30,000 to charity if I won. BOOM!

But Joey won in a landslide.

When I analyze it, I know why. I made people laugh. I was entertaining. But Joey actually delivered value. A lot of it.

I even remember thinking while Joey gave his talk: man, if I knew this when I was running my first business I would have made millions more than I did.

And Joey did another technique that worked well.

One of his slides had photos from each person in the audience. He even had a photo of me and my family. He had a photo for everyone.

We feel close to people who say our name, or have a photo of us in their slides. They did their work. They prepared. We feel like we know them.

And with an audience of people voting among 13 possible winners, you only need an extra vote or two to win. So Joey won.

Five years later I consider Joey a close friend. So when his book, “Never Lose a Customer Again”, came out, based on that talk he gave five years ago, he came on my podcast.

Despite the business-y title, it’s not a business book. The advice can be applied to ANY relationship at all and that’s what we focused on in the podcast.

But before we started talking he told me something.

“I’ve been stopped for speeding 81 times. But I only got three tickets.”

Using the exact advice from the book, he applied it to charming his way out of getting traffic tickets.

“You should write a book about this,” I said.

Here’s what he told me about how to get out of a driving ticket.

And it’s this sort of thinking that he applies to every situation I’ve seen him in (not only an ex-lawyer but ex-CIA and “other things” that he was not allowed to describe).

HOW TO BEAT A DRIVING TICKET

1) PEOPLE OVER-WORRY: “It’s hard to be a law enforcement officer”

Drivers are always terrified when they are pulled over. But they over-inflate their worry. The law enforcement officer is just as scared.

When he is walking up to the car he has no idea who you are, how dangerous you are, whether or not you might even shoot him. And for something so small-stakes as a driving ticket.

So remember he is just as nervous as you are.

2) DE-ESCALATE: “De-escalate right away. Pull over to the side. Park. Put your flashers on. Roll down the window, Put your hands on the steering wheel in the 10-2 position (as per a clock) so he can see your hands.”

He will appreciate you showing him that he is safe.

3) CONFIRM STATUS: “Always refer to them by a formal name. “Officer” in every sentence. Like, ‘I’m sorry, officer. Here you go, officer.’ etc.”

Let the cop know you respect his superior status and that you are a law-abiding citizen.

4) ADMIT GUILT: “Acknowledge what you did wrong. Be very specific. As in, ‘I’m sorry, officer. I was speeding because I was late for a meeting.’

Usually people deny speeding. They say, “something’s wrong with your radar”, etc. Don’t deny. Again, this shows the officer you respect his status and since only one out of ten people admit to wrongdoing, he’s taken off guard.

NOW that you have established his status, shown you are a good citizen and admitted to wrong-doing, you can start to assert your own status.

The officer starts writing the ticket, so you have nothing to lose when you say:

5) MAKE THE OFFICER SCARED: “I appreciate you have to write the ticket. I have to fight it in court.”

Joey said, “At this point the officer will look up and say, ‘what?’ ”

They are not used to someone saying right then that they will fight in court.

NOBODY, not even a cop, wakes up in the morning and says, ‘I hope I get a chance to do even more paperwork today.’ Court means a lot more paperwork. And less driving around. Cops hate this.

And THEN: ‘Yes, and I will request a JURY trial and not a judge trial.’

I said to Joey, “you can do that?” Joey said, “Yes, everyone has a right to a jury trial and this is a HUGE hassle for the court system and it could mean three days of testimony from the cop. Including being interrogated about his training, any infractions he might have, etc. He DOES NOT want this.”

“At this point, “Joey told me, “almost every cop rips up the ticket and says, ‘well, drive slower.”

“But what if they get really mad at you at this point?”

Joey smiled, “They could. That’s the risk. And that’s why I have three tickets out of the 81 times I’ve been stopped.”

I called my 16 year old yesterday. We spoke for awhile and then she said her older sister, the 19 year old, was driving her right then.

I couldn’t believe it. My two little babies driving around. Just yesterday they were sh**ting on the floor.

I said, “Be careful. Can Josie even drive?”

“She drives better than you!” Mollie said. And I could hear Josie laughing in the background.

Well…screw you! I’m going to drive this summer.

And nobody’s going to stop me. 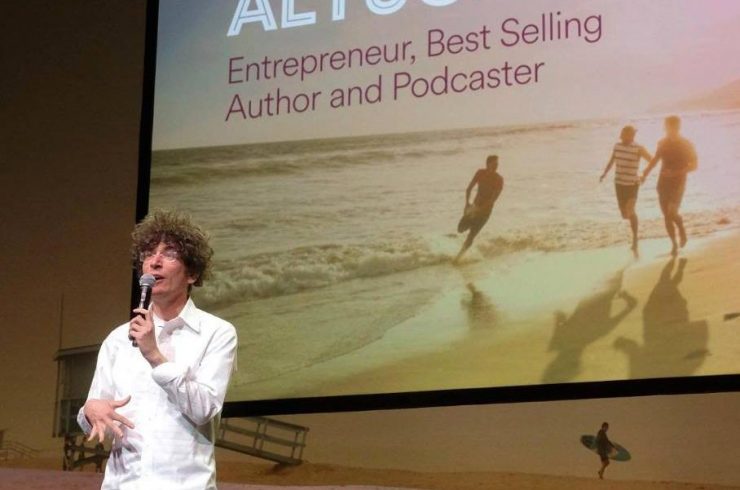 [Image: the talk where Joey beat me for the $30,000. He deserved it. (cc Jayson Gaignard for inviting me to give that talk. There’s a 6000 person waiting list now to go to his conferences.)]