I Just Binge-Watched Every Bill Murray Movie and This is… 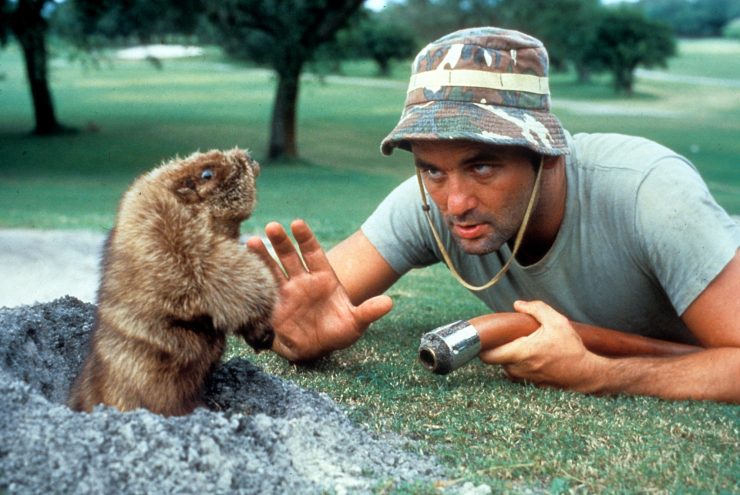 Jimmy Kimmel said to Bill Murray: It seems like you just do whatever you want. That life is spontaneous. You go with the flow and great things happen to you all the time.

Bill Murray said: Gilda Radner was rich so she would go into these auditions and not care at all whether she got them. So they were so dazzled by her lack of caring they would be dying to give her the role.

He continued: So I figured, I’m not rich but I’ll just pretend like I am so I won’t care at all and see what happens and I’ve been doing it ever since.

Harold Ramis finished college, was trying to figure out his life, and went to play golf with his friends. Bill Murray, with his high school degree, was working the hot dog stand around the 9th hole.

That’s how they met. They did Stripes, Caddyshack, Groundhog Day, Ghostbusters, and other movies together.

Ramis said, “When you find the smartest person in the room, stand next to him. I stood next to Bill Murray.”

He takes reality and translates it into truth. I want to be so broken I find meaning.

I want to be Bill Murray. Unafraid.

Here’s a little bit why (some of his quotes):

It’s hard to give that extra push. To make every day special. Every interaction important. Every thing you do have impact.

I know when I can’t get out of bed, when I walk around looking at the ground, when I can barely make small talk, that it’s time for the Push in my life. That I need to reach and grab more.

“You die in the improv set five times out of nine. So, once you get over your fear of dying, nothing else ever really scares you”

People always tell me, “Oh, you can’t worry about what people think.”

And then I repeat it. Because I know it sounds good. But it’s hard to not worry what people think. I guess I do it more than I admit.

How do you achieve it?

Great evidence: How many people have seen “The Razor’s Edge”…the movie Bill Murray did right before he did “Ghostbusters.”

“If you make others look good, you’ll look good.”

Bill Murray says this is the secret to his success.

He started out in improv. He didn’t try to make himself stand out and look the best. He was on stage with John Belushi, Dan Akroyd, and others who went on to enormous fame.

He just tried to make them look good. And he kept moving up the ladder of success as a result.

“If I see someone who’s out cold on their feet, I’m going to try to wake that person up. It’s what I’d want someone to do for me. Wake me the hell up and come back to the planet.”

Bill Murray walks up to a man on the street who is smoking.

Bill takes the cigarette out of the man’s mouth, take a puff, and then gives it back to the man. Says, “Nobody is going to believe you when you tell them this,” and then walks away.

Bill Murray views all life as an opportunity to squeeze a bit more juice out of it by improvising on that moment.

And why not? Else it’s just like reading lines off of a script.

There’s an entire science around the clutch moment in sports.

If you are tense, your muscles constrict. You won’t do as well. If you are relaxed, you can play at your optimal level.

The same goes for our emotional muscles. In all of Bill Murray’s movies, he comes across as if nothing phases him.

Now that I’ve binge-watched Bill I’m going to pretend to be him.

“I live a little bit on the seat of my pants, I try to be alert and available…for life to happen to me. We’re in this life, and if you’re not available, the sort of ordinary time goes past and you didn’t live it. But if you’re available, life gets huge. You’re really living it.”

This is about observation. Don’t look at the ground when you walk.

He takes his daily life and turns it into improv. Into art.

“I realized the more fun I had, the more relaxed I was working, the better I worked.”

How does one get relaxed? Play.

The other day I went bowling. Then air hockey. For about two hours I never even once thought about anything going on in my life.

It was great. Then I went home and paid my taxes.

“This is not a dress rehearsal, this is your life.”

How long can you do that before real life begins?

Eventually, I had to leave the job. I’m not saying this is good or bad. But it’s what I had to do.

Things have been so volatile since then. But I love the stories I’ve collected. Makes it worth it.

(RELATED: How To Quit Your Job The Right Way)

By the way, friends and lovers often turn into idiots.

Bill Murray is known for cutting out, immediately, any one toxic in his life.

We live in this FOMO world – fear of missing out.

Bill Murray has turned down the starring roles for movies like Batman, Forrest Gump, Splash, Awakenings.

He was considered for the Han Solo role in Star Wars!

He was going to be the lawyer in Philadelphia (instead of Denzel Washington)!

The movies he’s said “no” to have grossed billions.

Do we care? Does he care? If you stick with the things you love, be with the people you love, and say no to the rest, everything takes care of itself.

Ignore anyone who tries to steal joy from you.

All of the quotes above are from Bill. But this next one is a line he says in Groundhog Day:

“I’ve killed myself so many times I don’t even exist anymore.”

The movie Groundhog Day changed my life. I can’t really explain why.

We do have the opportunity to live the same day over and over again but life fools us into thinking it’s a new day.

After living the same day for 30,000 days in a row, maybe one day I’ll be good at life, fall in love, save the world.

In the meantime, I just want to be good at being Bill Murray.

Related Reading: Why Today Is The Day You Have To Reinvent Yourself