Financial Fridays: How To Deal With A Big Boss

I constantly sat on the toilet.

My boss always yelled at me. I couldn’t say anything. And when I left I went straight for the bathroom.

I couldn’t go to the bathroom in the same building (what if he was in the stall next to mine? We’d both be making music right after his yelling session).

I’d leave, go across the street to the library, found a basement to the basement, and found a bathroom that had been forgotten in another century.

I’d sit there. For a long time. Sometimes I’d read (I was in a library, easy to grab books on the way down). I’d maybe sit there for an hour or two.

Then I’d go back and avoid him for the rest of the day.

Oh! This was brilliant.

He had this way of looking at me when he was mad.

He wouldn’t move the position of his face (aimed downwards, reading a “report”). He’d just move his glasses down and his eyes up.

Those were the only movements I was worth.

And then I’d kiss ass. I’d try to impress him. “I just X”. And I’d try to take credit for something.

I wanted him to ask me to tutor his kids. Or maybe we could meditate together.

But that never happened. He was jealous.

He was unhappy at his own status in the company (his boss didn’t like him).

He didn’t like when I gave a talk and forgot to thank him.

He wasn’t interested in new ideas I had. I had to work on just his ideas.

He would have me stand in his office and he’d talk on the phone and say, “some of these kids think they know everything” and he would laugh with his all-knowing friend who I imagined was probably saying, “I hear you. I hear you” and laughing also.

I’d stand there. And wait. They would talk about sports.

He had me interview someone who was going to work for me. He would pay the person almost 50% more than me.

I learned later never to judge. Everyone has their own difficulties. They are not worse or better than yours.

I learned the key is to be “the Boss-Whisperer”.

You have to train your boss. They are very trainable.

In fact, they want to be trained by you. It makes their lives easier. They no longer have to think when you are around. Because you have trained them what to think.

I learned a lot how to deal with authoritarian megalomaniacs. I had to find my own meaning.

And sitting there on that toilet. I transformed myself into… the Boss Whisperer.

[Now a movie with me as a scared junior employee and Parker Posey as the domineering but ultimately lovable boss. Don’t tell Claudia that part]

[Graphic below based on the ideas in my new book, “THE RICH EMPLOYEE“] 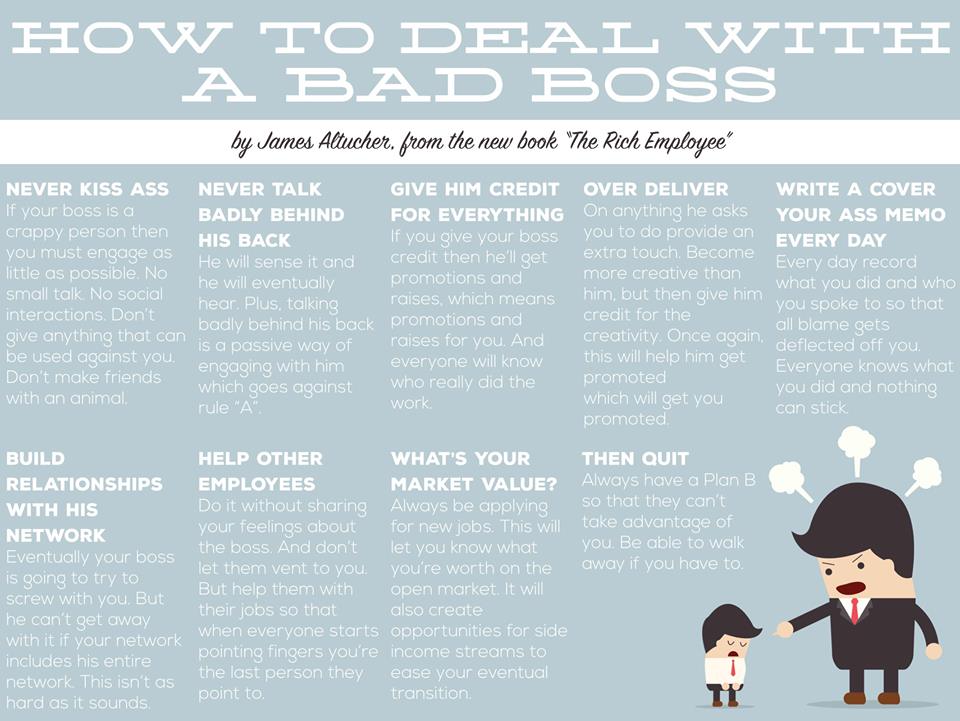