How To Make Your Brain Sharper

I wanted to make my brain better so I took drugs.

I took Adderall to be smarter. The Klonopin to handle the anxiety that comes with Adderall. The Amatryptiline to sleep because I can’t sleep on Adderall. The Percocet to feel happy when everything else wears off.

When I started to withdraw from the Klonopin I’d have nightmarish hallucinations for three or four hours while just sitting on my couch.

I tried Adderall because of my drug dealer: My daughter. 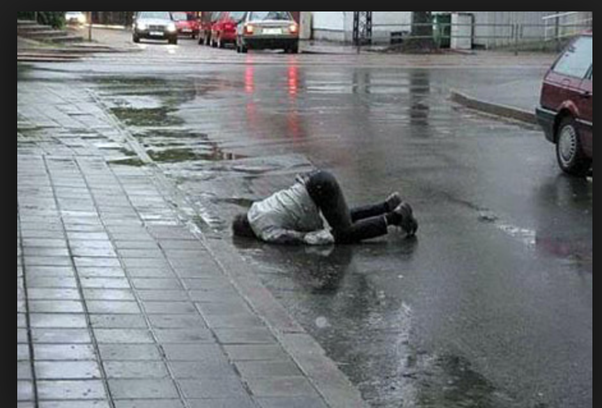 My life is messed up. I’m doing too many things and I need help or I’m going to explode.

I NEEDED MY BRAIN TO BE A SUPER POWER.

I run a business with $60mm+ in revenues.

I do standup comedy 3–5 times a week.

I write books and articles and, of course, answers for Quora. I’m going to write three books this month. They are already almost finished.

I am invested in about 30 different businesses and often I have to help the CEOs with critical life/death decisions often with just a few minute update to prepare.

One of my companies makes a gun that shoots out a steel cable at the speed of sound and wraps around the criminal.

This is an alternative to killing people.

I play chess all day long while I’m on the phone with other people and I have to pretend that I am not playing chess.

If you are on the phone with me, I am playing chess.

The other day I called a friend of mine. He wanted to talk. He was suicidal.

I hope I helped him.

I won two games and lost three while we were on the phone.

A podcast means eight hours of prep, 2 hours of doing the podcast. One hour of “post-game analysis”.

Four podcasts a week is a full 40 hour work week.

For me, that’s when my week first starts. I have another 40 hours to go. 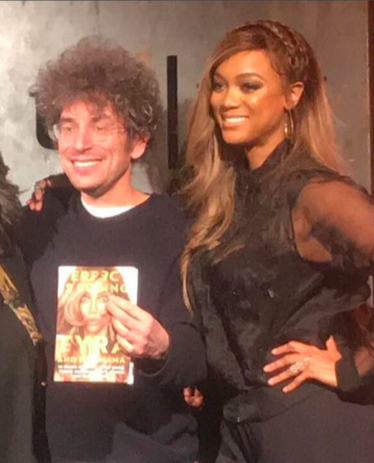 (Tyra Banks on my podcast)

I used to go to sleep early. But that’s been ruined by standup comedy.

On nights I do standup I start being scared the second I wake up.

What jokes will I tell? What will I do if the audience doesn’t laugh?

Most comedians tell the same jokes over and over for years. That would bore me. I don’t understand why they let themselves get bored like that.

I think of new things each time. Life is funny. Life is absurd.

He and Wilt Chamberlain are in an elevator. They are both 7′2″.

A guy gets in the elevator. A guy about my size.

He looks up at them and says, “How’s the weather up there?”

Wilt Chamberlain spits on him and then says, “It’s raining.”

That joke last night on stage got more laughs than all of my other jokes.

EXCEPT for the one where I was on my hands and knees in front of a doctor in the audience begging him to transfer some testosterone to me.

I’m engaged to a sex columnist.

I hate that I do so much. I need to reduce. But I don’t know how. In my entire life I’ve only added to the things I do.

Last year I reduced a lot of my activities. But then I added being an advisor on “Billions” (TV show), which was about 30 hours a week. And I added doing standup.

And, I’m also paid for my ideas. I make a living on my ideas. If I had no ideas, I’d be a broke drug addict.

So I need to every day sharpen my brain, exercise it, maximize it, make it better than everyone else’s.

Sometimes friends tell me, “Whatever you need, I’ll help you.”

This is what I say:

If you ever see me in the street with a needle out of my arm, please just pull me out of the gutter and onto the sidewalk.

When they laugh I know they won’t help me. 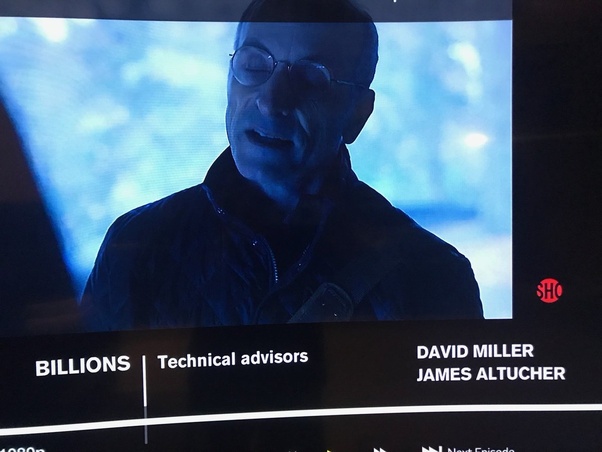 The brain is just a tool. Life is hard. Life needs health, love, money to survive.

You can say, “it doesn’t need money” and you’d be right.

Money doesn’t solve all of your problems but it does solve your money problems.

And assuming your body is healthy, then you need your brain to be a highly honed killing machine.

Nature doesn’t care if you live or die. Six billion people are competing for the world’s resources.

Your brain is a tool. But you need to sharpen it on steel.

You need it to process the past, over deliver in the present, and predict the future.

This is my brain routine. It’s been a miracle for me. A thousand miracles.

The books I’m reading from this morning:

“Why Buddhism is True” by Robert Wright

“No Time to Spare” by Ursula Le Guin (essays) 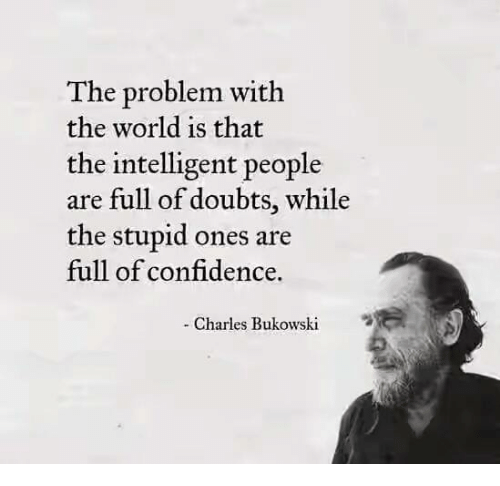 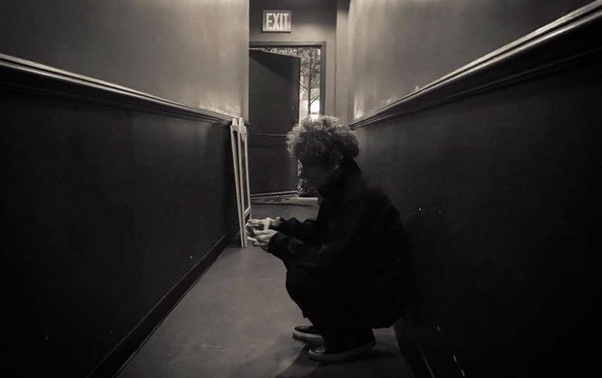 (checking my list of ideas I wrote on a waiter’s pad before going on stage).

Intelligence is competitive. You have to learn to be a great competitor. A killer (in games).

We are moving towards a “you eat what you kill” global economy. Meaning a global meritocracy.

This is not a political opinion but just reality.

Games teach you how to be competitive:

People say there are no new ideas. There are. The “unexpected” is all over but we seldom see it.

Every day I play chess and backgammon. Every day I read books or watch videos on chess to learn.

I’ve been doing this for 33 years.

I don’t do it to be a great chessplayer. Games are the steel I use to sharpen this blunt tool that sits above my eyes. 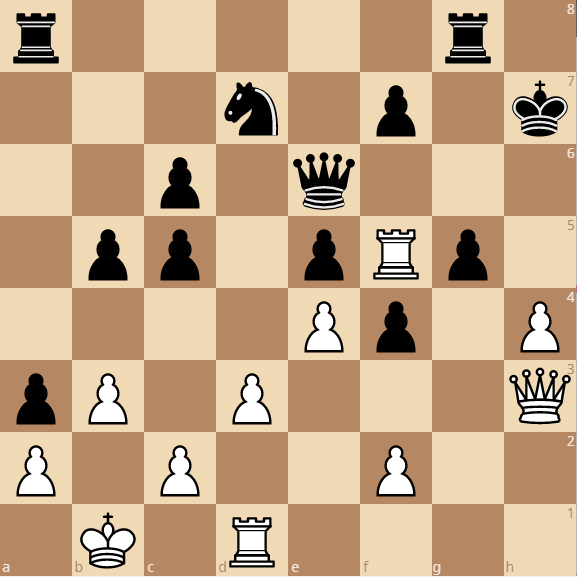 (White to move and checkmate in 2 moves. Solve 10 problems like this every day and you’ll sharpen your brain very fast).

I watch an hour or so of comedy every day. Not to get better at comedy. I started doing this ten years before I hit the stage to do standup comedy.

Comedians are the modern philosophers. It’s the hardest skill on the planet. Yes, it’s harder than heart surgery. It’s more difficult than making a rocket ship to fly to Mars (which is a stupid thing anyway).

Then comedians have to figure out how to change that angry-looking thing they saw into words that will make other people laugh.

Do you know how hard that is?

When I study comedy I see all of the sub skills the comedian has to master to accomplish that task of 20 laughs in five minutes. 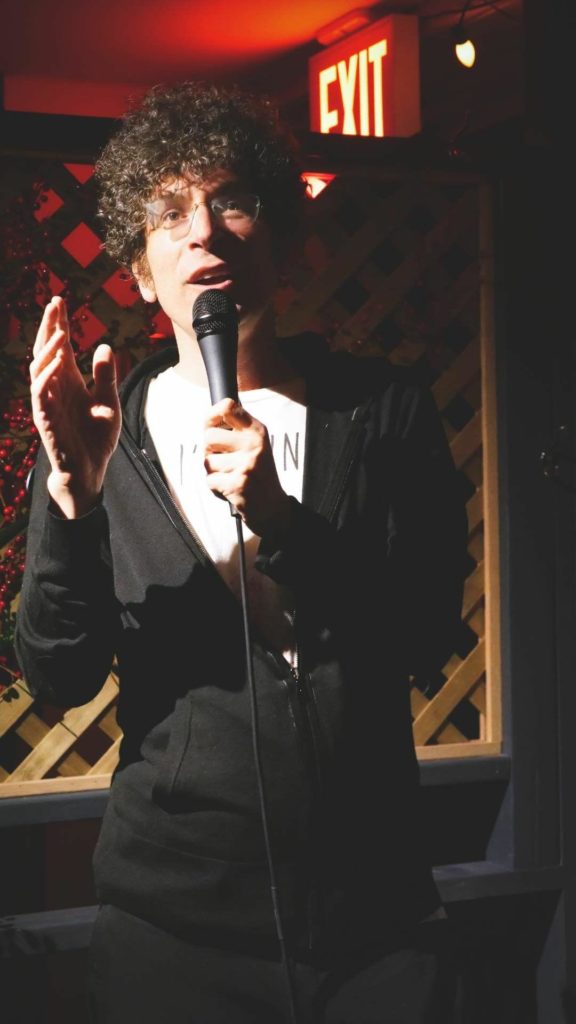 The “Unexpected” are the seeds you must plant in the brain and water every day.

I was heckled two weeks ago.

My joke was, “Not everyone needs to pursue their dreams. This is BS advice.

“For instance, Hitler was fine as a mediocre art student and then someone told him, ‘Adolph, why don’t you pursue your dreams?”

At that point, a German woman in the audience raised her hands as if to shield herself and she shouted, “Enough already. IT’S TOO MUCH!!”

I said, “We’re in a comedy club. NOTHING is too much.”

But I should’ve said, “I’m Jewish, and you’re German and you’re telling me what I can’t say….just like Hitler.”

And she never let me get to my punchline.

“Hitler did pursue his dreams. And that’s why he grew that stupid f**king mustache.”

It’s war on that stage. I’ve been on stage 100s of times now doing comedy. It’s war every single time.

I take video of every set. I study every second. I analyze my timing on every line. I see where I should have waited a quarter second more.

I see where I missed opportunities for the unexpected.

But I went home that night and cried. I need to handle the psychology better.

In 2008 I went on a date. I watched comedy for an hour beforehand.

During the date I kissed the girl within the first ten minutes. I had never done that before. We ended up having a relationship.

If you write a book, you’re going to get rejected.

If you come up with a business idea, some investors will say “no”. Some customers will hate it.

If you have a joke, some people won’t laugh.

I was addicted to OUTCOMES forever. I needed the dopamine of “Likes”, “money”, approval, validation.

Process is watching that video after you mess up on stage. Studying the game after you lose. Resubmitting to a new publisher after being rejected 15 times and insulted repeatedly.

Process is having the difficult conversation.

Process is falling in love again.

Process is being kind when nobody expects you to be.

Outcomes are echoes of the past.

Process is your brain actually being used.

Use it or lose it.

I wrote a best-selling book, “The Power of No”.

Either do things for free, or charge an amount ridiculously expensive.

Otherwise you are saying “yes” to too much.

In advance: make very specific rules for when you should do something for free.

Most things you won’t do for free. And most people won’t pay you a ridiculously expensive amount for the things they ask you to do.

This gives you time for all of the above things to sharpen your brain.

Then you can outsource “yes” and “no” to your superpower brain.

I do comedy for free.

For a million dollars I’d go to Qatar. 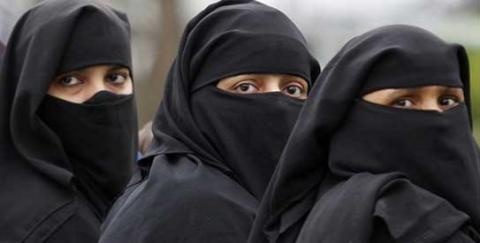 But this is a good start. Just do the above.

I’m not saying I’m the expert about improving your brain. I’m just trying to survive. I’m eager for validation so I use my brain to get it.

I invest in my self. But I diversify that investment.

Maybe that’s the most important rule of all.

But actually, the most important rule of all:

Then every day you’re a clean and untouched sponge ready to soak in the world around you.

Do one thing today that is totally unexpected.

P.S. Why make the brain smarter?

For your legacy. Legacy is not a book, or a tweet, or followers, or a title, or money, or even charitable works.

This is my only legacy: 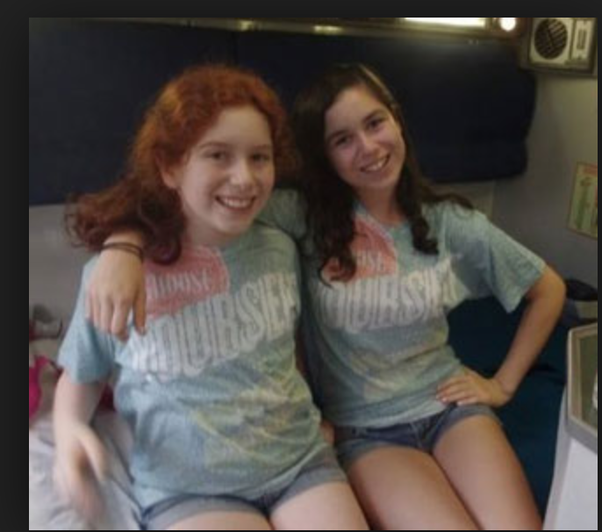