Burton Silverman, are you dead yet?

I just googled you to see if you were still alive. I guess in the back of my head there’s always this myth that an artist’s paintings go up in value if they are dead . Do you think that’s true?

So other than my sincere wish to see if you, my favorite painter, were still alive, I wanted to know if anything had changed which might affect the value of your paintings. But I googled and not only do I see you are alive and well (congratulations on this) but I see that you have your email address on your website so I figured I’d write.

I own your “Study for Arch-Deluxe” :

I paid $20,000 for it in 1999 at Gallery Henoch. I know they ripped me off but I hope you got your cut and at the time I didn’t care anyway. It was a drop in the bucket. Three years later that would’ve been an overflowing bucket for me.  I would’ve drowned in that bucket.

One time in 2002 I was going broke. I had maybe four months of life left. I called them to see if they could buy it back from me for $20,000. They told me they’d call me back but they never did. That would’ve bought me an extra 10 days before going broke but even ten days was a long time for me back then.

I would look at the people in your painting and I would feel so much worse than them. They had happy lives, it seemed to me at that time – drinking their coffee before going onto work. They had a mission. I had no mission. I had an empty hole in my brain that whistled when the wind blew through it.

I’m glad the gallery never called me back, though. Now the painting is hanging up directly to my right. I look at it every day as I work.

It’s so beautiful.  So many times I’ve felt like the people in that painting. A Tuesday morning, rainy, a little bit of coffee before work, crowded in together at the ledge at the deli trying to read the latest gossip on page six of the New York Post. Everybody in each other’s personal space.  The definition of personal space becomes infinitely narrow, touching without real touching, talking without real talking. Everyone staring into empty spaces inside of themselves, all in different directions.

I like how we’re watching the people through the glass. We’re not in there with them. The viewer is on his or her way to work. The glass separates us from our comrades. Maybe we’ll join them. But its already too crowded for us. Maybe the next deli will have some room. But, for the moment, we’re being rained on. We’re cold. We need coffee to wake up. We’re even worse off than the people in the painting. We left the playfulness of our childhoods such a long time ago.

Your painting I have is titled “Study for Arch-Deluxe”. I used to be able to find the actual  “Arch-Deluxe” on the Internet but now I can’t anymore. I guess things even disappear in the massive archaeological dig of the internet.

A friend of mine is a painter that’s greatly inspired by you. She couldn’t believe I had a “Burton Silverman painting”. She did a painting of one of my daughters:

My daughter, Mollie, doesn’t like it because she’s not smiling. But heck, her parents had just gotten a divorce, she was switching schools, she was unsure of a lot of things at that time. Sometimes it’s hard to smile. Her hands are wrapped around her body as if she can’t let herself go or everything will spill out. I wish now I had been the one holding her instead of her feeling she had to hold herself.

In any case, I hope you live a very long life. 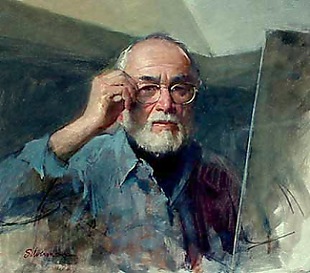 Related Posts:
“The Tooth”
“Why I Like the Ugliest Painting”
Burton Silverman quote:

Very early on in my life, I fell in love with the landscape of the human face, where all the emotional states of life are to be found, and the love affair has not faltered.