9 Things I Can’t Look Away From… 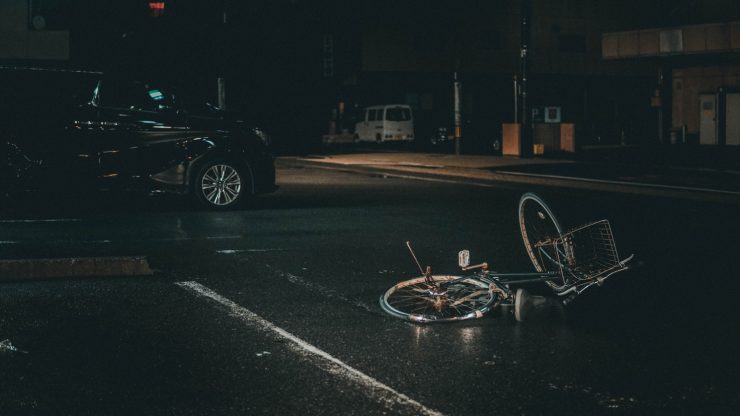 1) If I see two people having sex in an apartment across the street, I can’t look away.

I want to see from beginning to end. It would be appropriate and ethical to look away.

It’s none of my business what they do in their private lives. I’m not even turned on by it.

I just want to see it.

I’m sorry. If someone passes me and I notice they have a huge burn on their face, I want to look back and see it.

I want to know. I want to imagine what it was like to get it. I feel bad for them. I also feel, “there but for the grace of God go I.”

This morning I was at breakfast. I saw someone out of the corner of my eye who seemed to look very beautiful.

But when I took a closer look I realized her face was practically frozen.

I’m not judging her. But her lips were huge. Her cheeks were striking. Her breasts were huge. And her entire face seemed frozen in place.

When I say I’m not judging, I mean it. Sometimes heavy plastic surgery is hideous. But sometimes there is something morbidly attractive about it to me. Like she did all of this to her face because she thought it would make her look sexy.

I couldn’t stop looking at this woman this morning. At one point, she stood up and did ballet moves to show the other people she was sitting with.

I don’t know why she did it. But she kept doing it over and over. I kept watching. 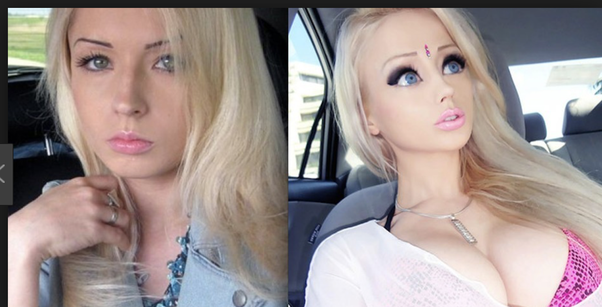 (real life Barbie. Before and after plastic surgery).

I am very uncool. I can’t help it.

The other day I was at a party and there was a mid-level actor/celebrity. I couldn’t stop staring.

I even wanted to figure out how to talk to the person. But I was too shy. So I didn’t.

But when I see a celebrity anywhere I am constantly peeking to check them out.

5) A couple arguing with at least one side crying.

One time my girlfriend threw a bagel at me. It had tuna on it. So a bagel and tunafish were dropping all over me.

If I were watching this I would not be able to turn away.

I used to do a project at HBO called “3am.” What people are up to at 3 in the morning in NYC.

If I saw a couple arguing I would always interview them. What are you arguing about? I am still obsessed, 20 years later, with the reasons couples argue. 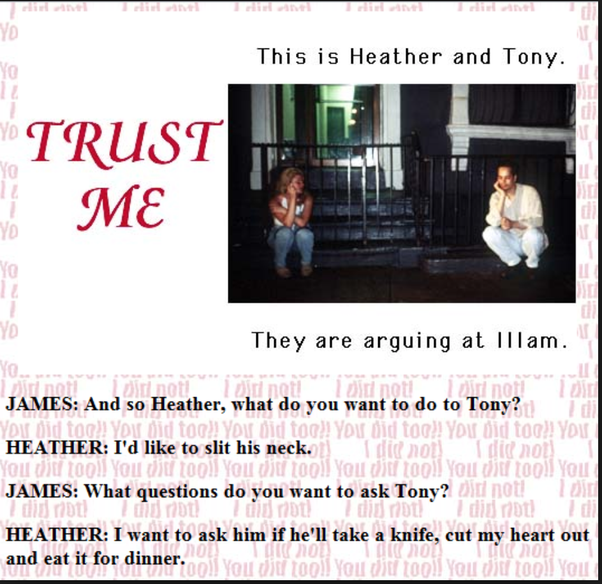 The second day I ever lived in New York City I was walking to work from NYC’s Port Authority.

I was scared I was going to lose my new job. And I was dressed in a cheap suit. And I was living with my parents.

Thousands of us poured out of the bus station and were walking to work.

The woman walking next to me was about three feet to my right.

A cab ran up the curb, hit her, and then drove off with a screech as fast as possible.

The woman three feet from me, was dead. If I had been more polite, I would have walked on the side with the curb. I didn’t know polite walking behavior then.

I ran to a payphone (!) and called 911 but so did several other people and soon an ambulance was there.

She was broken in half. The skin was still together but blood was everywhere and you could see that her body was no longer put together.

I couldn’t stop staring. I was late for work that day.

7) Someone looking at me.

I often think I am particularly hideous looking.

Sometimes I see people looking at me. I wonder why.

I always look back at them. If they are still looking at me, I look away. But then I try to sneak a look again.

This happened to me yesterday morning.

One time I dated a girl and the breakup was messy. She had an abortion. Then she was cheating. Then she wanted to break up with me.

I was basically torn to shreds emotionally every step of the way. I gave her the key to my happiness and she put it in her pocket and forgot about it.

Five years later I was at the Nomad hotel in NYC. I saw her working there. I wasn’t sure whether she was the hostess of the restaurant or something else.

But I stood behind a pole and stared. She sort of looked the same. Was she happy?

Even at that moment, staring at her years later, I felt jealous. Maybe she was dating someone else and she was happier with them than she ever had been with me.

In any case, I was also in a happy relationship then.

But then I got scared. I had to meet people in the hotel. And for some reason I didn’t want her to see me. I saw the people I had to meet but she was right next to them.

I waited. I called a friend of mine, “You can’t believe who I am looking at right now…”

Finally, she got on her coat and left. Then I went to my meeting and I told the story. But they didn’t care.

9) Ballet with my daughter.

Last weekend I went to the ballet in Poughkeepsie, NY.

But my daughter was in it. And I can’t pull away from it when she is performing. She is the most beautiful person, and the best ballerina, in the world. Maybe even the galaxy.

But I HATE watching everybody else.

So I get the program for the show. Out of the 17 or so different pieces being performed she’ll be in six of them.

I’ll sit right outside the auditorium and read a book. But every time one song ends I put a check in the program until I realize she is the next song.

Then with seconds to go, I get in the auditorium and walk all the way up to the front and watch her.

Then I leave again.

I told her I do this.

But I already did. 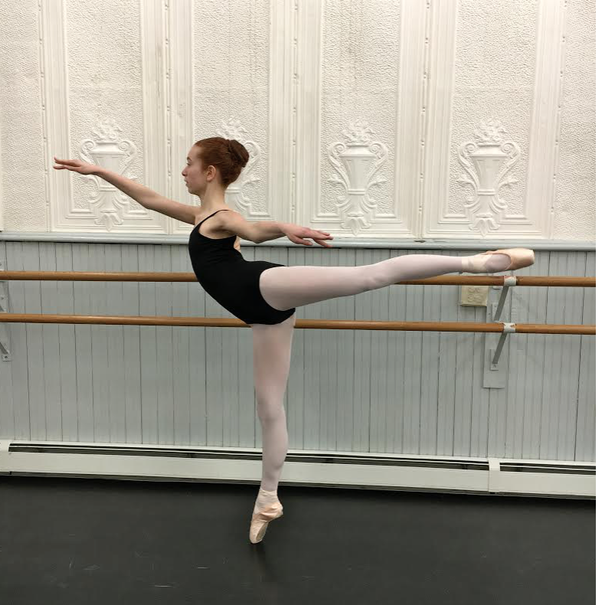 The things you don’t want to look away from are often scary. Looking is like “practice” for when these scary things happen to me.

And sometimes they are sexy or voyeuristic. We are natural voyeurs. The jungle has many dangers. We need to identify them. We need to know what they mean in our lives.

And sometimes we can’t look away because we’re in love.