Claudia just came down with Lyme disease. It’s a horrible disease because it’s difficult to diagnose. It has about 100 different symptoms and they pop up at random and are easily confused with other diseases ranging from Chronic Fatigue Syndrome, to severe arthritis, to various neurological or cardiac-related disorders.

My friend, Cody, had it while he was host of his own TV show. Literally, his symptoms appeared WHILE he was on the show. He came down with a co-infection related to Lyme called Bell’s Palsy. In other words, half his face became paralyzed while he was on TV. He went from looking like a normal human being to looking like TwoFace from the Batman series while he was live on the air. They almost had to shut down the show while it was airing. He spent the next month recovering in the attic of a house I had upstate, afraid to walk outside and show his face. His mom flew across the country to cook his meals. My kids were scared to look at him. By the time he recovered his career had almost been ruined but that’s another story.

Claudia has the Chronic Fatigue version. She sleeps about 20 hours a day and has a hard time moving the other four. She also has pains in her joints. Anti-biotics should cure everything.

So Josh Brown IMs me and says, “We’re arranging a happy hour. A bunch of bloggers writers from the WSJ, Yahoo, FT, Reuters, will be there. You in?”

I looked over at Claudia. She was reading but trying to stay awake. “Claudia, maybe you should take some sleeping pills just to make sure you sleep and the anti-biotics kick in.”

“You’re right,” she sort of half muttered. I got the water and the sleeping pills and the anti-biotics. “You’re so nice to me,” she said, and then she fell asleep for what I assumed would be about a 14 hour period.

Claudia tells me every time I go into the city something happens. “There’s always a story around you.”

I arrive in the city and pass by this scene at the new York Public Library. Eight kids were standing in a line. 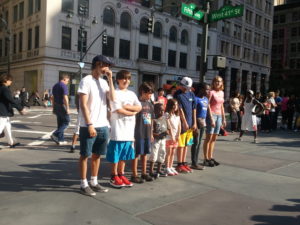 Apparently, once the performers raised $50 in contributions someone was going to jump over these eight kids.

Two things I noticed right away:

A)     Some of the kids clearly were accompanied by parents that were now sitting on the steps of the library. What parent would let their little kid stand in a line like this? I would not let anyone jump over my kid. Then add in 7 other kids they would have to jump over. Then add in that I had no idea who these people were, where they were from, how I could sue them if there was a problem, what their insurance was, etc. Kid safety comes first!

“Oh sure, here’s my kid. Jump over him and if he gets hurt or paralyzed from this then no problem, see you later.” Who would do that?

B)      I recognized the main ringleader of the performers. You’ll see him in the video below. He put on a yellow mask in the video while he was walking around getting contributions.

For 25 years I’ve seen him perform in the streets of New York. I even saw him performing on the streets of Boston when I visited there once about ten years earlier. There were two tricks he’d always do. He’d be smoking a cigarette while breakdancing. Then, without touching the cigarette, he’s turn it around in his mouth and look like he was swallowing it. Smoke would be coming out of his mouth and nose. Then, again, while doing dance moves with his hands and feet, the cigarette, still fully lit, would come out of his mouth and he’d continue smoking it.

The other move he always did was that he’d make his stomach really fat and then really thin, while he was moonwalking around.

But now he has white hair and he was walking around making jokes raising money.

Oh, there’s a third thing I was thinking while I was sitting there waiting for the event to start. Were we all sitting there because we wanted to watch someone jump over eight kids? An amazing feat of physical sportsmanship, endurance, and training that would be impressive to see so we can see the utter limits of human capability?

Or were we all sitting there because we wanted something completely disastrous to happen. The guy would fail, break his neck, land into the kids, who would get damaged in some way, kids paralyzed, heads spines shattered, and everyone would be crying and screaming. A total shitfest.

What was the show truly about? Seeing something amazing? Or seeing complete disaster. Maybe the audience would be satisfied with either outcome.

Above’s the video. It’s 4 minutes 50 seconds even though the jump is only a few seconds. I just started it going because I had no idea how long it would take for them to raise the $50 they needed to start the jump.

Then I went off to the bar. I have a really hard time socializing. I really want to make more friends and I liked all the people there. But once there were more than ten people there I couldn’t handle it anymore. I was like the wicked witch of the west and I felt like I was starting to melt. And I wanted to get back to Claudia anyway to make sure she was okay. So I was the first person to leave.

On the way back to Grand Central I get a call from CNBC. “Steve Jobs just quit,” Ben Thompson, a producer there, told me, “what are you doing right this second?”

I was about two blocks from a TV studio. I thought of Claudia at home suffering from Lyme disease.

So I went over to the studio, spewed my Apple vomit on NATIONAL TV for a few minutes in the media vomitorium then caught the train home. (Here’s link to that video).

An hour or so later I climbed in bed. “Anything happen in the city?” Claudia, half sleep, said.

“Nothing special this time.”

How I Met Claudia