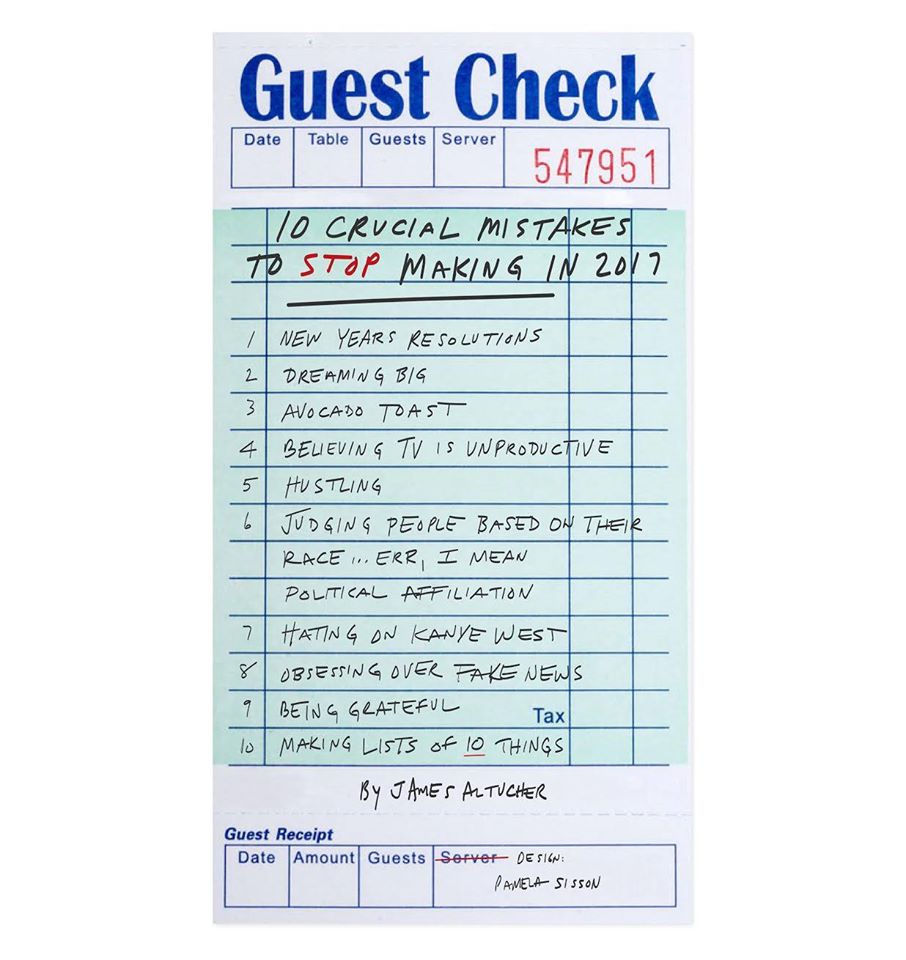 Maybe this wasn’t the year of greatness for me. Often I lost my way in the maze.

Sometime it seems like everyone got the rule book but I have to figure it out. What are the rules? What is the game?

If I’m lucky enough to see 2018, then maybe I will have avoided some of these mistakes.

I can do it for 30 cents at home. But I don’t have any food wherever I am staying.

I went from “French” to “Avocado” on the menu in order to be healthy. Health is taxed by restaurants.

In 2017 I’m going to focus on being healthy without being ripped off.

Kanye West. I understand many people don’t like him. But he is better than you or me. He simply is.

He is talented at music, production, promotion, singing – and he combines them well to make some good music. He has sold 32,700,000 more albums than I have.

When we hate on Kanye it’s a way to provide stress relief. To find some rationale as to why we might be better than him. But we aren’t.

I want to keep getting better at many things, get good at combining them, and be the best at the combination.

One time I was eating dinner in the Mercer Lounge. The only other person there was at the table next to me.

I wanted to talk to him but I was shy. Everyone probably wants to talk to him. He was hunched over his computer. Scrolling through clothes.

“I think it’s his clothing line,” my friend whispered to me. We didn’t want him to hear.

He was by himself for an hour. Then when he left, the outside lit up like a lightening storm. Photos.

It’s also an ode against college education and a hint at what kids might find when they are no longer pampered and have to face the difficulty of making an impact in the world.

Good morning! Please listen to it.

Kanye West is trying to make his way through the maze also.

It’s hard to say this is a mistake. But maybe part of it is. It’s like I’m saying, “At least I have THIS or I’d be sad. Thank god for them or I’d kill myself.”

Maybe better than being grateful is to think of the things I am doing right now to make my life, and the life around me, a better place.

Like instead of saying, “I’m grateful I woke up healthy” I should replace that with “today I’m going to exercise.”

Or, instead of saying, “I wrote yesterday,” come up with ideas to write about today.

I want to move forward instead of trying to put band-aids on sadness.

It was a sign of intellectual independence somehow. Superiority.

But TV is a way I can absorb thousands of stories and learn from them and become better and yes, escape, because of them.

He went from writing novels to the greatness of TV.

Oh! And two seconds ago I found out that one of my favorite comic book writers, Ed Brubaker, also works on Westworld.

I just re-watched “Lost.” I want to crash on a mysterious island that changes my life in unpredictable ways.

I watched all six seasons of “Lost” with my 14 year old. She loved it. Sometimes quantity time is just as good as quality time.

TV is not escapism. The best TV is beautiful art. The best artists are making TV right now.

One well-known and hard-working businessman that I admire told me earlier this year, “people should get to work and stop watching ‘House of Cards’.”

Sometimes it’s ok to enjoy life with the people you love, the only sounds that of your favorite actors crying and being comforted by magic and love.

[ RELATED: The Secret To Doing What You Love ]

There’s a commercial from the 80s where a kid is telling his grandpa (they are on a canoe for some reason) he has a friend who is Jewish (or black, I forget). The grandfather says, “that’s prejudiced.”

This is the test. Democracy is so audacious it always wants to test us. Can we move beyond our personal desires and fears and work towards creating our own impact.

With art, with our work, with our words, with the way we treat each other. History is a story we write together.

When I was a kid, a friend of mine had a pinball machine in his basement. This was an amazing thing.

All of us would play all day. If the pinball gets stuck, you have to shake the machine to unfreeze it.

If you shake the machine too much you lose the game. It’s called “Tilt”. Illegal.

We were kids so one loss didn’t mean so much. We’d hit each other and laugh and play. One game, then another, then another.

And sometimes, we knew it was time to shake the machine just a little bit. So we could keep playing and laughing.

Only much later we grew up.

P.S. – Again, sometime it seems like everyone got the rule book but I have to figure it out.

I’ve reinvented my career, my interests, my life, many times over the past twenty years.

And I wrote a new book about it…

It’s not THE rule book but it’s worked for me.

This is the book I wish I had at the beginning of that long and often volatile journey. I found when I outsourced my self-esteem to only one outcome, disaster resulted. Reinvention was the key to ensuring that the outcomes in life were positive ones.

If you want, you can reinvent yourself too. Everyone can.

So…will you help me with something?

I want get this message to as many people as I can, it’s a big goal of mine and it means a lot to me. You can support this goal with a few clicks and maybe 11 seconds of your time here.