Dare of the Day 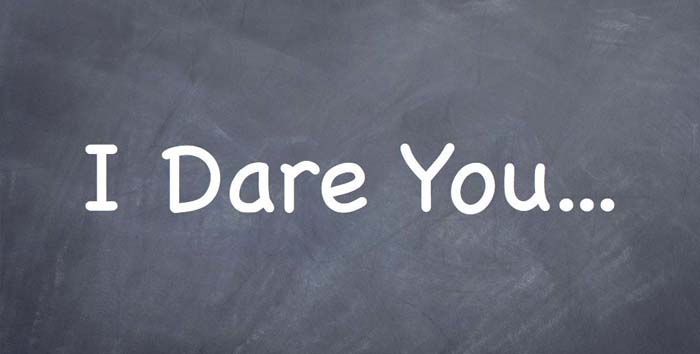 She said, I am an introvert but had to develop tricks to fake being an extravert because of where I worked.

I said, Do you think everyone in LA is an extravert?

She said, I don’t know. Maybe they are all faking.

We were at a party. I had been sleeping but a friend called me up and said “you have to go this party three blocks away from you.” So I did.

Why? Because why not? Sometimes you know to say no. But to surrender to the moment, if nobody is getting hurt, sometimes you say yes. I went.

I said, can you tell me some of the tricks?

I asked because sometimes I feel I don’t really know how to live and look like a normal person.

Sometimes I like being home and writing and reading all day because that passes for human without me having to see, or touch, or talk to anyone. When I go outside, I often feel unhinged. Like I could float away.

So I wanted to know.

She didn’t tell me at first.

Ok, she said, sometimes I would do what I call a “dare of the day”. I would do something that I might be scared to do or was out of my comfort zone.

She didn’t want to tell me.

She squinted her eyes at my face then touched my cheek and rubbed her fingers together as if pulling something off my face.

I would go up to people, strangers, and pretend to pull a wisp of hair off of their face.

That would freak me out, I said. Both doing it and having some stranger touch my face.

I would do all sorts of things like that.

Ok, I said, I want to try this. Start me off. Tell me more or tell me what I should do tomorrow.

She made a motion with her fingers around her head the way people do when describing someone who is crazy.

She said, Now that i’ve told you this your mind will start working on it. Tomorrow you will wake up and your body will know what to do.

She told me the rest of her story, which was fascinating. Stay tuned for the podcast I hope she agrees to do.

Then I went home. I woke up and I was upset about something that had happened earlier the day before.

My friend Amy then had advice: go and eat pancakes and bacon and photograph it so I know you are eating. You have to prove it to me.

I went. I ate. I photographed.

Then my body knew what to do.

I walked outside and there was a man and his daughter. I held up my hands with palms out, non-confrontational and said, “Good morning!” and they smiled and said good morning back.

A pretty girl crossing the street. Good morning! She turned away and angled away from me as she walked past. I guess it might be taken the wrong way sometimes. Maybe it might not be attractive.

I said to a guy opening up his store. Good morning! He smiled. Hey, good morning, guy.

I said it all the way home. I got home. I didn’t feel down anymore. The sun was coming in. I started to write.

First I wrote the girl from the party and told her what happened.

She wrote back (i’m going to paraphrase), don’t record your dares. That’s why I was hesitant to tell you the dares I did.

She said it will take a few weeks to figure out your boundaries on dares. Both personal and physical.

She said, don’t dare anyone else to do this.

I didn’t understand her reason. But maybe it would affect the way I did my own dares. SO DON’T DO THIS.

I wanted to leave the party but I had one more question.

What did you do after you were working in LA for so long as an assistant.

She said, I went to get a PhD in Robotics at [best school in world for Robotics]. She laughed and I think she said, maybe that was a dare for myself also.

I went home. I went to sleep. And she was right.

My mind was going crazy that night. But in a good way.