Don't Run Over A Baby In The Middle Of The Street 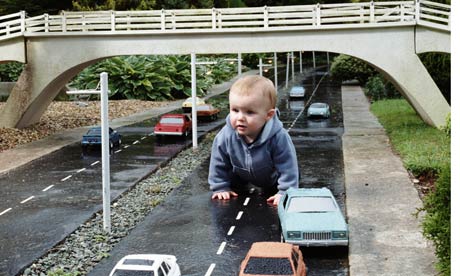 The car started to skid and swerve and we couldn’t stop. It was all my fault.

I had sped up while going into a sharp curve. I was just fooling around. The entire road was ice. My 12 year old kid was sitting next to me.

Why did I do that? I don’t know. Because I’m an idiot sometimes. I hope all people are idiots sometimes so I don’t have to feel so bad but maybe it’s just me.

When we couldn’t stop the car from skidding Mollie started screaming. We went into a snow drift and kept going.

The snow was beautiful and white and we were over the top and sitting in a perfect white yard. I put it in reverse but the car was perched in the air above the snow bank. It wouldn’t move forward or backward and the wheel just spun in the air.

It was getting cold and dark. I had no shovel and when I went outside to try to kick away the snow around the wheel it seemed almost infinite. I kept kicking but my feet got cold and then I got cold and went back in the car.

Mollie was disappointed in me. “What are we going to do now?” She said. She was angry. But I had no idea.

I could have also been scared. What if we are stuck all night? Or even worse, what if I don’t stop by the pharmacy and run the errand I said I would run for Claudia!

This is a great example of what I call a “difficult gratitude problem”. Everyone says be “grateful”. It’s easy to be grateful when things are going well. Grateful for kids, wife, home, food, blah blah.

Much harder to be grateful when you know you are an idiot and everything bad is your fault.

So here’s what I am grateful for about crashing into the snow and being stuck in the night. I was totally irresponsible and foolish and it seemed like nothing good would come out of it.

A) I spent more time with Mollie.

She was disappointed in me at first. But then while we just sat there in the car doing nothing she showed me a game she was playing on her phone and we spent some time going back and forth, laughing, while she tried to explain her strategy for winning to me.

B) We live in an amazing service world.

I didn’t even have my phone. Mollie had her phone. Total cost: $0. We had some sort of insurance for an unlicensed irresponsible father crashing into snow banks on an icy road in the night.

C) It takes a village.

D) I learned about cars.

I said to the first guy: “I think my car is broken now.” He laughed. He didn’t even know what that meant.

He said it just needed to be moved a little and it would be all right. He told me to cancel the towing service.

We figured I had “front wheel drive”. I didn’t know what that was. He said, “it means the front wheels drive. Not the back wheels.”

And he showed me where the strap goes when a tow truck tows another car.

My car was really baked into the snow. It was like the candle in a cake. We couldn’t drag it out. We tried a nylon strap. Then a metal chain. Both broke. Eventually a rope worked.

The reason I was outside was I just dropped off my kid to her “sweet 16” sleepover with friends. Meanwhile, about 7 of us adults were outside in the cold trying to get my car out of the snow.

We were laughing this was our version of an adult sweet 16. I seldom go to parties for more than 30 minutes. This was about an hour of hanging out and talking to people.

G) I didn’t finish the errand.

By the time the car was out, the pharmacy had closed. I never got the medication. And then it turned out Claudia didn’t need it. Which is good because the side effects were bad.

After the car was out, instead of going home, I took Mollie for hot chocolate.

While we were at hot chocolate I had us do an exercise: where does she see our relationship in five years (she’s 12) and where do I see it?

We didn’t finish the exercise but we talked about the importance of doing exercises like that.

I’m glad she still listens to me even though she knows her father definitely shows signs of severe stupidity.

She said, “we had an adventure tonight!” Adventures are good for little kids. Sometimes for adults also.

I) I got to listen to music.

For awhile I was sitting in the car alone while I was waiting. Mollie was in the house where the sweet 16 was with her older sister.

I will be honest: 1984 was the best year in history for music. I listened to John Lennon’s “Nobody Told Me There Would be Days Like These”. Michael Jackson’s “Thriller” and a song I forget the title to by Sheena Easton. Go 1984!

When the towing finally worked with the rope strap, I felt “Hurray!”

I probably would not have felt that happy if I had just driven straight home. I got out of the car and shook everyone’s hand. Everybody laughed. Everyone was happy even though this had taken up an hour of their time on a Saturday night. Maybe they felt glad they could help.

I also probably learned a lesson. Don’t speed up on a curve on a road made of ice with snow all around at night. I say “probably” because who can predict? I make mistakes all the time.

Believe it or not, exercising the gratitude muscle helps solve digestive problems and makes it easier to sleep and even helps people with cancer and polio. I’m not kidding.

When we were having a hot chocolate later, Mollie told me something she was scared of in her life. Something that might happen in the future a year or two from now that she hopes doesn’t happen.

I asked her to write down all the things she predicts in the future and see which ones come true. So she will know her success rate as a psychic. She laughed because she knew I was making fun of her.

I also told her there could be worse things. And she said, “like what?”

And I said, “well, I could’ve run over a baby while driving the car just now.” She laughed, “why would there’ve been a baby crawling across the road in the middle of the night?”