Even Dictionary Writers Have Souls

So I failed again. It was one of my New year’s resolutions. I was going to learn Spanish. But you really have to go to someplace where they speak Spanish all day long. Then you have to stay there for fifteen years and watch telenovelas all day long. Then you can maybe speak to people in pharmacies (“I need medicine”, etc.)

But I did get to meet an interesting person in my journey. I never actually met him but I feel like I have. I feel like he’s my alter-ego. My Spanish doppelganger. But he’s unhappy and I want to help him. 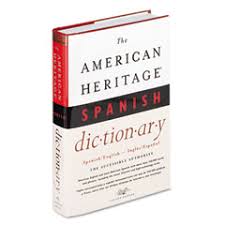 He’s the author of a popular online Spanish-English dictionary. Dictionaries aren’t supposed to have personalities. But this guy couldn’t help himself. It bubbled out of him like an excited little boy at a circus.

I first met him when I was looking up the meaning of “otro”. Other. The dictionary-writer spit back an example:

My question is: “do what?” What was the dictionary writer trying to get her to do (with money) before he gave up on her and got back to writing his dictionary. I can picture him late at night, working on the “O”s in the dictionary and he was like, “fuck it, I’m going to a hooker”. He was the type of guy who loved the nuances of words. He lost track of everything else when sucked into the universe of Spanish subtleties. No girl wants to touch him. Thats why he has to pay someone. Otherwise…. as the saying goes.

I looked up “never” the next day.

The guy’s been robbed repeatedly.

Then he has: ” es una lección que nunca jamás olvidará ” – its a lesson he’ll never ever forget.

I wonder if he said that after his embarassing escapade with the girl he tried to pay.

The next day I was looking up “gusta”. My alter-ego filled me in:

So finally he got the girl to do what he was paying her for in the first place, I guess.

And then we find out how he truly sees himself with another “gusta” example:

“vivía recluido y no gustaba de compañía” – he lived like a recluse and did not like company.

I get it. Sometimes I feel that way also.

I looked up “comprende”

“compréndeme, no me quedaba más remedio” – you have to understand, I had no choice!

I do understand, Javier (I’m assuming that’s his name. And, in particular, Javier Bardem. But before he met Penelope Cruz, who tamed the scared lion in his soul).

But we always have choices.

So now I needed to look up “remedio”. One of Javier’s first examples:

Clearly he knows what type of person is looking up words on his dictionary. And he has utter disgust for us.

I can’t resist with this guy. I decided to look up a curse word. “Mierda”. One of his top examples:

“tu hermana es una mierda” – your sister is a shit.

Maybe he was trying to pay “your sister” in the first example. But she wouldn’t do it. Unless he paid her more.

We’re all sitting at home stuck in our brains, working on the dictionaries of our souls. Nobody knows the real person we keep tucked away inside. But sometimes I wish I had a dictionary to translate all of the wonderful people around me.