How To Have An Ex-Wife 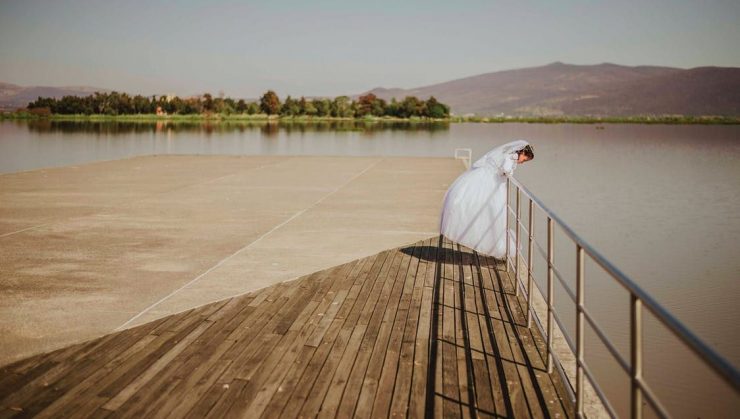 Anne’s job was to make sure I wasn’t breaking the law. I, of course, was trying to try break the law as much as possible.

Like, if a girl was a 15 year old runaway why should her face be blurred out?

Or if there was a logo in the background of a photo, why blur it out? Who really cares?

Or a naked woman, or a man claiming he killed someone. And so what if someone was drunk and didn’t sign a release form? I’d forge the signature. I had no problem with that.

Anne was assigned the job every week of making sure I didn’t break the law too much. So I did what I had to do. I asked her out.

I figured if she was dating me, I’d get away with more. And, believe me, I was correct.

On the fifth date I tried to kiss her but she said, “Too early.” So we waited until the sixth.

She had a stalker. The very first time I kissed her she screamed. Because right outside the window was not only the stalker but his father. Looking at us.

She had to go to her priest, who eventually spoke to the stalker, who then left us alone. But things like that happen in the beginning of something.

[ RELATED: How To Get People To Like You In 5 Seconds or Less ]

At some point we had to decide, Work or Marry.

She was that age. She wanted kids. I didn’t want to have kids. But if we broke up, one of us had to leave the job, she said.

I had a business on the side. The main client of my business was HBO, where we both worked. So I didn’t want to quit.

This sounds unromantic. I loved her and wanted to be with her. But like everything you do in your 20s, I did everything too young.

We made a deal, marry and wait one year to have kids. Ok!

At the time I was living in the Chelsea Hotel. I didn’t want to move out of the Chelsea into Anne’s apartment after we got married. So we didn’t live together even after we were married.

At work, one of my friends asked, how come you don’t wear a wedding ring.

I don’t think men should wear jewelry, I said.

Maybe these things were signs. But everything is a sign later on.

A year after we were married, I was living in her apartment and she was pregnant.

The hardest part of a marriage, in my simple-minded opinion, is not about surviving negative things. A marriage, for the most part, cannot survive huge bad things.

But this is what a marriage should do:

In a marriage both sides should celebrate each other’s successes with blind abandon.

I think this is what we forgot to do. Or we didn’t yet know how to do.

She might disagree on this. But it’s just my opinion.

GETTING ALONG WITH AN EX

Here are my rules:

A) She is the mother of my children.

Nobody in my life is more important than my children. #1 and #2. Which means she is #3 in my life no matter what.

B) I never will say anything bad about her.

I write bad things about myself all of the time. I have no shame.

But I will never say anything bad about her.

Because of “A”, anything I have is hers also.

I hope she never feels the stress about money that I often feel.

I can give my opinion. And I have a lot of opinions. No college. No high school even. I tell my kids every day they don’t have to go to high school. They can just stay with me.

Here’s my high school plan for them: every day we watch a movie and talk about it. And you go to all of my podcasts and we talk about them.

And I will take you to any friends so you have a social life.

That’s my high school plan and I think it’s better than going to high school. But they don’t agree and I don’t think their mother does either.

I can give advice all day long. But they live with her. So I never once argue with her decision.

The arguments were so sore and bitter that at one point even our marriage counselor (our tenth) looked at us and just smiled and said, “I don’t think you two should be married anymore.”

Sometimes the arguments felt literally raw to the bone. No more blood left.

All of the energy and passion that we once had to staple things back together again was just gone.

And now when we disagree, it usually just signals the end of a conversation. No problem. We’ll talk again sooner or later. We have two kids.

When things have been hard for me, Anne has been there for me also. I am glad I have such a kind ex-wife.

She once asked, “Why don’t you ever mention me in anything you write?”

I thought I was a failure when my first marriage fell apart. I was so ashamed about it I would hide it from people.

And again when my second marriage fell apart.

I did a podcast with Kevin O’Leary from Shark Tank. Surprisingly, he had a lot of good advice about relationships.

But one thing he said scared me. He basically said a person is a failure if he can’t make two marriages work. Because no matter what happened, you have to accept part of the blame.

And I’m willing to believe that.

So I did what anyone should do.

Judy Blume wrote about a dozen young adult novels when I was growing up. I loved her books. “Tales of a Fourth Grade Nothing”. “Blubber”. “Are You There God, It’s Me Margaret”.

And then, of course, I learned a lot more about life from her more adult novels, “Forever” and then “Wifey”. It was the first time I read about sex.

Judy Blume said to me, “Listen. I represent your entire childhood, right?”

When my oldest kid was just five years old I showed her a movie about Hiroshima. In the movie, a little boy watches his sister melt from radiation burns because he couldn’t save her.

In the middle of the night, I heard her crying and I ran downstairs. She was still asleep but she was crying and hitting her pillow and yelling “Why!”

I woke her up and comforted her. I felt so bad. I caused her to have a nightmare. She kept crying in my arms.

Eventually she calmed down and, still in my arms, she fell asleep.

After the divorce, except for when she was staying with me, I realized I would never again be there to comfort my kids if either was having a nightmare.

How many nightmares has she had since then? How many have I missed?

But missing the nightmares was the worst thing about divorce.

As for my ex-wife. I’m glad you are such a good mother and friend. I realize it wasn’t so easy being with me.