I wrote and self-published a brand new book, published TODAY:

Here’s the cover. If you click on it, it takes you straight to the book. If you’re an Amazon Prime member you can read it for free. Otherwise, it’s $2.99 for the Kindle version. 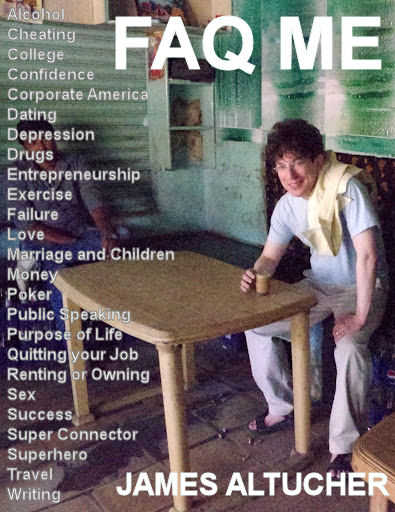 Also, anyone who bought my last  book and sent me the receipt will get this one for free in PDF form. Many people who have asked me questions during my Twitter Q&A are mentioned in the book.

Here’s the INTRO of the book:

WHY WOULD ANYONE ASK ME A QUESTION?

I’ve failed at just about everything I’ve done. I’ve lost tens of millions of dollars after making it from scratch. I’ve been divorced. As a father, you can make your own judgments based on what I’ve written. As an entrepreneur I’ve had successes and failures. I’ve fought addictions, some of them I’ve won, some I would say are still in process. Yet, people ask me questions.

I’ve been an entrepreneur and writer for the past 15 years. About a year and a half ago, I started blogging. The main component of my blog was that I would be honest and revealing. The times when I would be on the floor and just struggling to get up and get motivated. The times when I would pray for nothing but my own death so at least life insurance could be used to keep my kids happy. That’s how stupid I was. That is how revealing I was on my blog. And then some.

People were emailing me many questions, “How did you get yourself off the floor?” “What do you think of X?” “How can I build Y?” “How do I come up with ideas?” “How can I self publish a book?”  “How can I be happy when I’m going through a divorce?” “What’s the first step when starting a business?” “Is it ok to cheat on my wife if we never have sex?” “How can I marry a billionare?”

I am not very good at answering emails. However, I wanted to answer these questions, and I felt that not just me but anyone can answer the questions. So I started to schedule one hour a week, Thursdays from 3:30-4:30 EST, so anyone could ask. I would Tweet answers away, but really, anyone could. That is what’s great about Twitter.

And why would I want to do this? What good does it do me? Really…nothing. But I love it. I used to religiously read the advice column “Dear Abby” as a kid. An advice column. Then I would buy the collected columns (since she had decades worth of material) when they came out in book form. She had been doing it since 1956 and her daughter continues the tradition. And then there was “Ask Ann Landers” which was every bit as good and done by her twin sister. Of course, they couldn’t use their real names. “Ann Landers” real name was “Eppie Lederer”.

People would ask them anything. I remember one in particular. A woman followed her husband late at night to a strip club. The man went in the back with a woman. Later, under interrogation from the wife he claimed, “all I got were sexual favors”. In other words, he was trying to say, no big deal. This girl wanted to know (from Abby, or Ann, I forget which) if this was okay.

I forget their response. But right then and there I decided I wanted to be just like “Dear Abby”. I wanted people to feel comfortable asking me about “sexual favors”. What could be more fun in life?

Initially I majored in Psychology at college. My dad asked me, “Why do you want to major in Psychology? Psychologists don’t make any money. Then you won’t meet any girls.”

“But what if I don’t want to meet the kind of girl who is going to like me just because I have money.”

He did not convince me. Unfortunately, some bad things happened along the way towards me being a professional clinical psychologist –not- and future Dear Abby.

Psychology 101 was considered a “gut class”. 2000 people were in the class. The teacher gave the same multiple choice exams every year and there were only 2 tests and a final, and that was your entire grade. I read every psychology book in the library. I was passionate about the topic. I got a D- in the class.

I don’t really know how I got a D-. I studied. I took notes. I attended every class (the only time I did that during my entire college education). I also knew people were cheating (studying the prior year’s multiple choice exams, knowing they would be the same). But I assumed I would be great at multiple choice exams.

Well, somehow I wasn’t. I don’t even know what went wrong. They never handed the tests back.

I figured, OK, no problem. I’ll take Social Psychology, which was the next class higher. Unfortunately, by this point I had stopped attending classes. Too boring and I was starting a business on the side. Then one day I attended a class and there was a “pop midterm”. I had never even heard of such a thing. But my entire grade was going to be determined by this midterm (and then there would be one more test – the final) that I had not studied for, prepared for, took notes for, in any way.

I pulled off a C+. Then I went to see a guidance counselor to determine what I should major in.

“Well,” she said, “one thing is for sure. The only major you CAN’T major in is psychology.”

“But I want to be a psychologist,” I told her.

She raised her eyebrows. “I think that’s not going to be so easy for you.”

And hence my feelings about college education began to form. What a load of—-.

I don’t have all the answers. I do not admit that I do. In fact, if you were to just superficially look at the chronological history of my life you would see it mostly filled with miserable failures punctuated by the occasional success. I’ve lost millions of dollars at different points. I’m a divorced father of two. I was thrown out of graduate school. I’ve failed at many businesses.

During the hour once a week I answer questions, people know that I work hard to give the best answer I can, and I hope the answers are occasionally helpful. Then, I expand some of the answers into blog posts and other people provide answers in the comments as well.

WHAT IS NEW AND ORIGINAL IN THIS BOOK:

For this book, I’ve picked out the best questions and answers, expanded further, and categorized by subject. There’s a lot of original material for many of the questions. In some cases I rewrote answers now that I’ve had more time to think of them. In some cases I added material.

I also added some Q&A that was asked privately via emails (while keeping identities private). This is all original material in the book.

I hope you like the book and that it’s helpful to you. I also hope you join me for more Twitter Q&As on Thursdays.