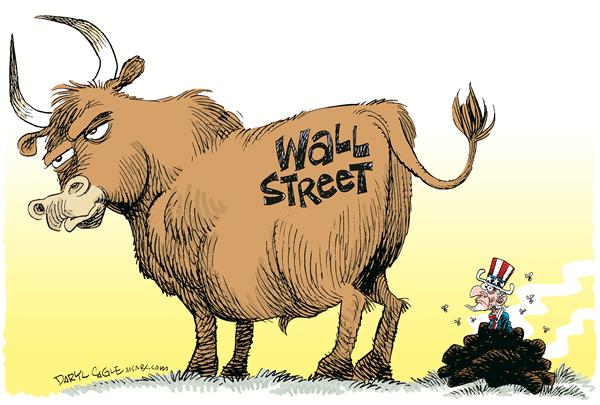 It’s not Friday but who cares. The stock market is lying to you.

This is the worst open of a year since 1932, the middle of the Great Depression, when there was 20%+ unemployment and it was only going to get worse.

Banks were about to get all shut down. People were on soup lines. And another eight years of hell were in store for people.

This is not happening now. Let’s look at what is happening in reality:

This is the main reason the stock market has been falling.

How do I know this? I don’t read any of the news but this morning I looked at all the headlines and this is what they said. “CHINA MANUFACTURING DECLINE CAUSES U.S. STOCKS TO PLUNGE”.

– China manufacturing growth has been slowing for the past six years in a row. So this is no surprise.

– China manufacturing has a tiny effect on the US economy.

I’d be more worried if the Chinese service economy was slipping. That’s the part of the economy that spends tourism and consumer dollars in the US.

Instead, the service part of the Chinese economy (like any developing economy, including the US, when manufacturing slows) is hitting an all-time high.

– Chinese manufacturing plus new tensions in the middle east, helps keep a cap on oil prices which are ready to explode upwards. Low oil prices are effectively the same as having lower taxes. This leads to higher stock prices.

“But China is the second largest economy!”

This is a great pundit argument ready to go for TV and for academics.

In the 1990s both the Soviet economy and the Japanese economy (the two other largest economies back then) totally collapsed and never returned. NEVER.

What happened to the US economy? It became larger than ever. Economies are linked….until they aren’t.

A Famous Bet that Explains What Is Happening

In 1980, Julian Simon bet the economist Paul Ehrlich that no matter what basket of commodities Ehrlich picked, prices would be lower ten years later.

Ehrlich, a decently smart guy, laughed at how easy it would be to win this bet.

Why did he win? Because he knew that no matter what materials the US economy depended on, we would innovate faster than the costs would rise.

New inventions and technologies would outpace the demand for those commodities so that as we needed their functionality more, the prices would fall.

Think about computers: your price per speed and functionality in your computer has gone down every year since they’ve been invented.

Another Great Example of Innovation and Deflation

Think about lighting your house. In the 1880s you would have to work for 15 minutes to pay for an hour of kerosene lamp usage.

Today you have to work for 1/2 a second to get an hour of reading light.

The same as true for the linking between world economies. When Russia and Japan collapsed, we found new sources of commerce that linked the US to the rest of the world (the Internet, for instance).

Where is the U.S. Innovating

And probably many other areas that I don’t even think of (Chemistry improving various metals and food production, etc).

It’s even interesting to look at where we are stagnating. Education and healthcare. Prices are going up while quality is either staying flat or going down.

And yet… someone wrote me the other day about a website he used to get a doctor’s house call and a complete medical procedure. Total cost to him was $50 instead of $500 in a hospital.

And sites like Coursera, lynda.com, Khan Academy, Udemy, and more are quickly replacing the automatic reflex to send kids to over-priced colleges and schools.

Are We Heading Into a Great Depression?

Someone asked me if prices are too high and about to collapse.

What prices are too high? Housing, while recovering, is still not as high as 2006.

What about stocks? I doubt it. Apple, one of the fastest growing companies ever, is trading at just five times cash flow.

That’s what investing in Apple is like right now. Investing in T-bills, by comparison, gives you 2.25% for every $100 you put into it. That sucks compared to Apple. .

Can Apple go lower? Sure. But then it’s more of a buy. Anything can go lower in the short term.

But where is the cash to buy these things.

In 2009, banks were about to go bankrupt. They had no money.

Now banks have an extra $2.4 TRILLION sitting around doing nothing. Meanwhile, commercial and industrial loans were up over 10% last year.

Businesses grow faster when they can borrow to finance their inventories.

What About Rate Hikes?

The only reason the Federal Reserve is slowing bring up rates is because the economy is crushing it.

AND, unlike the uncertainty we have had all 2014 and 2015, the Federal Reserve has now been very transparent about how fast they will raise rates. i.e. Not fast at all.

I don’t want to say buy stocks now. I don’t like to predict the future.

But the reason we are alive as a species is because our ancestors who paid attention to bad news (a Lion running at you is very bad news) lived and the people who didn’t pay attention…died.

The people who are happier and more successful, know that we are no longer in the jungle.

Every day is a day to create and innovate. To start a business or to help make other businesses better. That’s where you tap into the flow of success.

You don’t have to fly to Mars. Or make a cure for cancer. You just have to always ask yourself, how can I help in some small way today?