Financial Fridays: Why Today Is The Day You Have To Reinvent Yourself 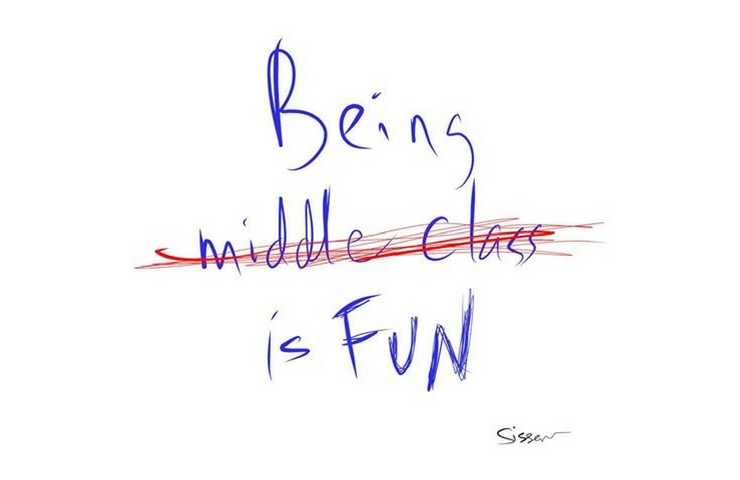 It’s going to be a shitstorm and I hope I have my umbrella.

Incomes are getting lower every year. This will never stop.

It’s not. It’s the first time ever that income has gone down over such a long period (more than a year).

This means: relying on a college, job, promotion, security, stability, retirement pension, retirement income == thing of the past.

It’s the death of the salaried employee…and here’s my solution.

Because everything that used to be safe…

Even worse: asset values have gone up (houses, stocks, educations, etc). So prices for things you want to buy have gone up but incomes and job satisfaction have gone down.

Of course a key to survival that I’ve written about many times is: don’t buy a house, don’t go to college, don’t contribute to 401Ks that rob your money, and either don’t get credit cards OR stop paying back your debt.

But there’s a more serious problem:

A) Demand has gone down:

Because of outsourcing and automation, the basic equation of all economics throughout history has been reversed.

Supply is almost infinite (it costs nothing now to make an iPhone in China.)

Demand has gone down. I haven’t upgraded a computer or phone in years. They’ve stopped improving for 99% of the features I used to buy for.

For me, personally, I’ve thrown out everything I own.

Many people are, correctly (I have to admit), not going to that extreme but they are realizing the basic equation:

B) Rich are getting richer for a reason…

This is not a political post. Or a revolutionary one. Or a socialist one. Or a whatever. It’s just facts. Every year, the Forbes 400 of billionaires gets wealthier.

Three reasons the rich are getting richer.

1) The bailouts saved the economy. But at a cost.

I won’t get into the technical details. But in 2009, the US Central Bank printed up a few extra trillion dollars.

The theory is that that money would spread throughout the economy. Poor and rich.

Banks got bailed out. Bonuses went up. And a rich person puts the extra dollar in the bank and a poor person pays the rent.

So the money went into the banks, which then stopped lending money out to “high-risk” people because the Federal Reserve also started paying interest to banks on any excess reserves.

In other words, the Fed gave banks money, then gave incentives not to lend to avoid any lending catastrophes. But it backfired.

2) Some of the extra money went to infrastructure projects that the government did.

Because they don’t pay income taxes. They pay capital gains taxes, which are significantly lower (20%) than income taxes (39%).

Again, this is not an article about economics. Or about government. Or revolution. Or “the top 1%”.

This is about why I am scared and what I am doing about it.

Here is what I am doing:

A) I can’t rely on any government, bank, or educational institution.

Any institution that makes money when I borrow money.

They will advertise, “improve yourself” and try to lend me money.

They are primarily designed to make the rich richer and the poor poorer.

I do not say this in a political way. I have ZERO interest in political issues. This is simply what is happening. This is what the data is showing.

They will want you to succumb to their pressures:

While you are at your job, they want you to put a good portion of your salary into mutual funds or 401Ks that get managed by bankers and you aren’t allowed to touch for decades.

Which, of course, I write about. But let’s take it a step further.

I always say it first has to come from within.

The change you want in the world around you has to start with the world inside of you.

i.e. write down ten ideas a day. Be around good people. Be grateful, etc.

But you also have to really look at an important data point: the IRS says the average multi-millionaire has seven different sources of income.

When you have one source of income (Me, Inc.) – for instance, a single job – you are falling into the trap. You will be one of the masses instead of one of the people who will survive.

There is a tiny circle in society made up of people who have corporate and traditional jobs.

Then there is a much larger circle of people who are no longer civilians. Who have stepped outside the comfort zone and are making money from all of the alternatives.

So you constantly have to be on the lookout for the other sources of income I write about repeatedly.

You have to remove yourself from the civilian (i.e. single corporate job) population.

The world is changing quickly. A few years ago we didn’t have tablets or smartphones. Now a billion+ people have it.

A few years ago we didn’t have search engines. Now everyone has all the knowledge in the world at their fingertips.

The best careers (Steve Jobs is a great example. Elon Musk another. Richard Branson another), reinvented themselves every few years.

Branson is a great example. He started in the music magazine business. Now he builds space ships.

Everyone I’ve ever had on my podcast, 200 successful artists, billionaires, astronauts, athletes, writers, entrepreneurs, inventors, have reinvented themselves over and over.

There is NOT A SINGLE EXCEPTION of the 200 I have interviewed.

When I was in my 20s I had no idea what well-being meant. I thought “happiness” meant a private plane, a big house, fame, whatever.

As the director Tom Shadyac (who gave all his millions and moved into a trailer park) told me:

“Happiness is based on the world ‘happenstance’, which refers to something outside of yourself.”

You need to find well-being from within.

And here is what it is:

Increase those every day and you will find well-being.

If all you do is the same thing every day, you will never increase those three things in your life.

So reinvention occurs every day. It’s not something you wake up every five years and say, “hey, today is reinvention day.”

Finding mentors to teach you.

Finding the next generation to teach.

Finding friends who build you up and challenge you. This is your ‘scene’.

Everyone going through reinvention needs a scene.

See my full post on the 5×5 rule here: The Power Of Five

Ugh, I sound too depressing. I’m not a pessimist.

But I am hopeful these ideas will help me survive. I have been through every failure imaginable. Loss of family. loss of health, loss of mind. Loss of money.

Over the past ten years I’ve also seen others apply these ideas.

And in the past three years I’ve interviewed hundreds of other people who are aware of what is happening.

They have reinvented themsleves. They have thrived. They have surfed the rage that is simmering underneath and ridden that rage to greater highs and greater hopes.

These people will save the world. They are not the 1%. They are outside of the category, in my opinion.

You and I can be like these people. They have all started where we start. They have done it and made it to the finish line and beyond.

This is now the time to do it. It”s going to be too late tomorrow. And it was too early yesterday.