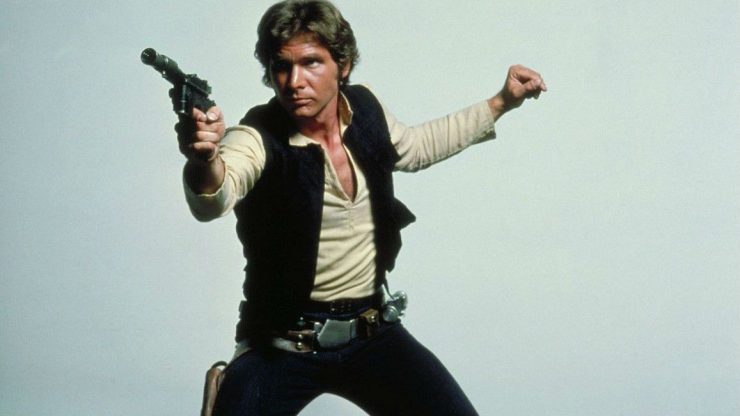 Harrison Ford was a carpenter before he was the biggest star in the universe.

George Lucas needed carpentry work on a door in the studio. Harrison Ford knew Fred Roos who was working for Lucas.

Ford had briefly known Lucas because he played a small role in the movie, “American Graffiti” (remember that pre-Star Wars Lucas movie?). But Lucas had already sworn he would not have anyone from that movie in his “space” movie.

Fred Roos was the casting director for Star Wars. He said about Ford: “Ford knew carpentry, needed the money, had kids, I decided to help him out.”

Harrison Ford was 35 years old then. A failed actor.

Lucas met with Ford while he was working on the door.

Ford was skeptical. “My best friend in the movie is a tall guy in a dog suit.” He didn’t think Star Wars would be a hit.

A year or two later, Harrison Ford shot at Mark Hamill’s father, enabling Luke Skywalker to destroy his father’s home and save the universe.

Did Ford complain, “There is no way I am going back to carpentry. I’m better than that.”

You are never better than anything.

But with optimism, we are okay with taking one step backward (or five steps backward) to take eight steps forward.

With pessimism, we fall straight down. (“I am not deserving” is the mantra of people who don’t deserve).

Harrison Ford was a great carpenter. And then a general in the Rebel Alliance. And then killed by his own son.

I had to move once to a small house. With two small kids. With no job. I was depressed.

To be honest, I was pessimistic. I had no idea what I was going to do. I was so depressed I could barely move.

But by writing down ten ideas a day, I slowly realized one thing (or developed the ability for one thing): I had ideas!

Most of the ideas were really bad. I had a new idea for diet pills, for instance. Bad idea.

I had an idea where people would tell if someone was smart or stupid just by how they looked. (“Isn’t that mean?” my oldest daughter, even then, was smart enough to ask me). It was supposed to be a dating site.

I started writing for thestreet.com for $200 an article, even after I had made and lost millions.

One thing turned into another.

I never shot at Darth Vader. I never joined the rebel alliance. I never kissed Carrie Fisher or Ally Mcbeal.

I never had that magic one moment where I can say, “everything changed”.

Mostly things were disappointing. But I worked hard. And not always, but mostly, I was optimistic.

And then eventually, things started to mostly go well for me. And for the people around me.

Magic happened. I can jump and I will fly.

The Law of Magnetism (at least, this is what I did):

Am I now living the exact life I want to live? I have no idea. But today I will do all of the above and it will be a good day.