In 1997, a partner at a venture capital firm mentioned to me that he owed all of his success and millions to a psychic named Mercedes that lived right on the other side of the tunnel in NJ. It took three months to land an appointment. I got there, in her heavily Hispanic neighborhood, and I had to wait. She had a customer. Her store smelled like incense and was filled with little statues of Jesus, and other statues of things I didn’t recognize.

I walked up and down the street. I kept thinking, like I reflexively do in these situations, I could hide here. I could get an apartment for almost nothing. I could meet an Hispanic girl. I could eat Cuban food every day. And I could sleep and read. Maybe forever. Nobody would ever find me again.

When she was ready for me she did something with some cards. She lit incense. She was very kind and said kind things to me about my present and my future. I went back a few times, mostly because the partner at the VC firm was a multi-millionaire and would swear everything was due to her.

A few years later something similar happened. The #2 or #3 guy at one of the top 3 phone companies (starts with “A”) told me he owed ALL OF HIS success to a psychic in Connecticut. He insisted I go to her. I went to her. It was a far drive and as usually the case with me and Connecticut, I got lost. In fact, Connecticut is the state that took my license away. Every street in Connecticut has the same name and they all run parallel to each other. In the woods. And although they are parallel they all run in three or four dimensions so you never know where you are and you’re never quite sure how late or early you are.

But I got there. She had the cards also. Also a computer-run astrology chart of me. We spoke for a while. Two hours. It was more like a therapy session.

Nobody ever told me anything that came true. The second psychic did think Wall Street was going to collapse at some point but I think, living in Connecticut, she probably had more inside information than Stevie Cohen. Her clients were probably all hedge fund managers and CEOs. I should’ve listened to her. She’s still saying everything’s going to collapse.

I was one time in a hotel traveling and I couldn’t sleep. It was 4 in the morning. I turned on CNBC and I saw the second friend ( the #3 guy from the “A” phone company)  right there on the TV. He was on for only 20 seconds so I was lucky. He was in Hong Kong talking, I guess, about the phone situation there (I wasn’t paying attention. I was just amazed to be seeing his face on TV after not seeing him for five years). I wrote to him and said, “I just saw you on TV!” He wrote back seconds later, “Now, James, what are you doing up at 4 in the morning? Only you could be working that hard!”

But what was he doing in Hong Kong on TV? He’s 65, working 80 hours a week for The Man, and is on TV in Hong Kong. He clearly doesn’t owe success to anyone but himself. No psychic told him to work that hard, or to fly to Hong Kong, or to be as visible as possible every chance he got, or to network with everyone he’s ever met over a 40 year career, or even to respond to me just seconds after he left the TV studio. And with such humility. Assuming I was working harder than him, which I wasn’t. I was just an insomniac. Trying to sleep against the hordes of demons from the land of fear that kept invading my dreams at that moment in time.

Success, in every case, comes from the alchemy of your health, your mind, your positive energy, and the real world situations you persistently improve for yourself. Anyone I know who is successful is the wizard of that alchemy.

A psychic wins all the time. If she predicts success, and you were successful, then she was right! If she predicts success, and you fail, then nobody is going to be asking you for advice anyway on what psychic they should go to. Its easy work to predict success for someone. And you can charge a lot for it. But its hard work to make the future happen.

I’ve only gone to two other psychics (not counting the time I met Michael Jackson’s super-psychic, Uri Geller) . One time in 1996 I was on a date with a girl. “Psychic $15”. The girl wanted to go. We went in and I paid, assuming that would guarantee the psychic saying what I wanted her to say. But she said she had to see the girl by herself. And then the girl refused to tell me what the psychic said. I never saw her again. 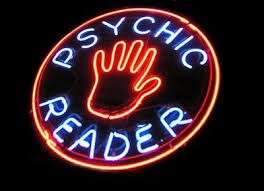 The other time in 1994 I had just moved to the city. I was feeling very lonely and wanted to talk to someone, anyone. Around the corner from my apartment on 14th and 7th I saw a second floor apartment with a red light on. On the sidewalk was the sign “Psychic ⇒” pointing upstairs. The door was open. I went up. Two little kids were in a livingroom. “Mama,” one of them called. Out came the psychic and the two kids disappeared. She was about 50. I was 26. Heavy cleavage, heavy everything, wrapped in layers of silks. A scarf over her head but long brown hair. Acne I could barely make out in the dark red lights. A pseudo-gypsy.

“Sit,” she said. And she took my hand. I felt electricity.  I didn’t listen to anything she said.  I wanted to be touched so badly. I wanted to grab her and kiss her and pull her to the ground, unravel the silk scarfs, and spread her open, with her kids right in the other room with only a red curtain separating the rooms. If I did that, and more, I had a sense the future would be laid out in front of me like a treasure map.