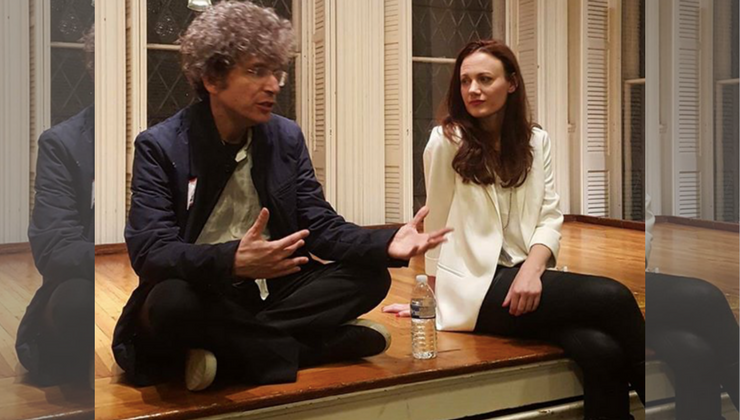 I’m speaking about suicide tonight. And failure. And despair.

I’m speaking about how when you lose all hope, you can still lose more. But it’s at that point, you have an enormous opportunity to gain.

Specifically, how I gained when I was at that moment.

But that’s not what this post is about. And by the time you read this, that talk will be gone but there will be others (excited to speak at Google HQ in Mountain View on December 8, which I’m hoping will be videotaped).

The talk tonight was organized by a friend of mine, Monica McCarthy. Why is she my friend? Like with most things, there’s a story:

Monica has wasted years of her life trying to give me advice in bad situations.

Advice is wasted on your friends. I never listen. Instead every time I was in pain I’d call her and say, “I think you were right again.” And then she’d give advice I’d ignore.

Then I’d disappear until I called her again. “I think you were right”.

But one advice I took.

I gave a talk in 2013 where Monica was in the audience. I didn’t know her at all. I don’t think we spoke at the conference.

A week later I got an email from her with a link to a video. What is this?

In the video , she described in great detail how my talk (which, I have to add, was already a decent talk – something I won’t admit to frequently), could have been better.

Why did she do this? Why did she waste an hour of her life giving me such great value? I don’t know.

It was a great video. She gave me at least three tips that I follow to this day and every one of my talks since has been better as a result.

I’ll write up these tips the next time I have an article about public speaking although some of them I’ve already mentioned before.

BECAUSE she did this video and created such incredible value for me, I reached out to her and we’ve worked together on MANY projects ever since.

Money has been made on both sides. Many people have benefited from our collaborations. Many people have had fun. We talk with each other or our mutual friends almost every day. I can truly say I love her and will always wish her the best.

Because of this one video.

One video and we have a lifetime friendship that has created so much value for both of us.

Then, when my life got blown out from under me in 2015, she had an idea that scared the hell out of me.

She called it “Must Love Books”. The idea was based on a conversation we had: “let’s have a book reading” without the “reading”.

Book readings are boring. Readings are always fun before and after the reading, because you get to talk to people who love books and you do it in a bookstore. I love books!

Readings are boring because writers are not really performers. They write.

They don’t do well reading their books. It’s hard to sit and listen to their monotone nervous voices.

I’m always looking around during a reading because I want to talk to everyone else there. We are all there because we love books and creativity.

So we rented out part of The Strand bookstore in NYC. And Monica organized everything. And it was the BEST party I have ever been to. And all my friends were there.

“This is the first party I’ve ever been to where more people showed up than were on the invite list,” Monica told me.

One friend said to me at the end of the party, “This was the best classic New York experience I ever had.”

On the way there, I was TERRIFIED. I really wasn’t in shape for a party. I am shy. And I was a wreck. I think I was crying while walking there.

I was so afraid of going to my own party that I was going to just stop and go home. I said to my friend, “this is a mistake. Let’s turn around.”

Monica called my friend (I wasn’t picking up her calls) that exact moment and said, “You better make sure James gets to the party!”

I went. She was right. It was fun.

Monica is hosting this talk tonight and interviewing me on stage and I’m sure has all sorts of activities planned for the attendees.

I am sure this event started as just a brief conversation I can barely remember. But for Monica that means it’s time for a party about books.

And, I’m not much of a drinker. But of course many writers are. So drinks will be served.

Once again, Monica, you’re going to have to call at the last minute and say, “Make sure you get here.”

And, because now I finally know better, I’m going to listen to you.

Thanks for the friendship. I think good friends are rare. And valuable.