Giving a condom. Plus 11 Other Things One Can Give

I was a bit surprised when she gave me a condom as a present. A few days earlier she had interviewed me for a Japanese magazine. This was around 1996 and the company I had started was building websites for many entertainment companies. When she did the interview we were surrounded by a couple of people from my company, including Valerie, who had made the introduction.

All I remember from the interview was her asking, in extremely stilted English, what I thought of Leonardo Di Caprio. Apparently everyone in Japan was going crazy for him. I vaguely knew who he was at the time. Titanic hadn’t come out yet and I had never seen Gilbert Grape (and still haven’t). A few days later she called and asked if she could ask some followup questions so I said, “sure”.

We went into the conference room. She asked some questions I can’t remember. Then she said, “its tradition in Japan to give a gift”. She reached in her purse and she gave me a single condom. She gave a little bow which was like a nod of the head. I gave a little bow back and said, “thanks”. Then she left. I feel like I missed out on an opportunity at that moment. That was very typical of me.

I had lunch with a friend the other day who was from Brooklyn but had lived in Japan the prior ten years and was visiting on her way to moving to London. She said that the Japanese always give a gift. She then gave me nice gifts for both my kids and Claudia. I told her the story above. She said, “oh my god, that definitely WAS NOT AN APPROPRIATE GIFT for a Japanese woman to give.” 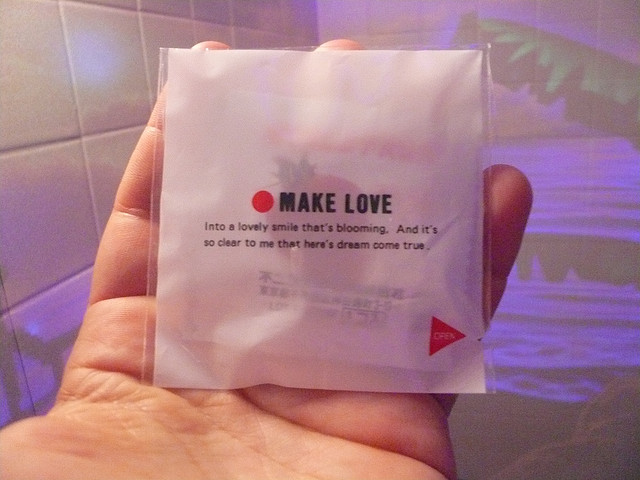 Still, it made an impression on me. In a variety of ways. And it stood out so that even though I can’t remember anything else about her, I remember her “gift”.

Every day we bump into a thousand people with closed eyes. Everyone is either thinking too much of the past or too much of the future. They stare at you, they stare in front of themselves as they walk, they stare at the roulette tables all day long hoping for their number to come up. But it’s hard to get people to suddenly focus their eyes and really look at you, to relate to you, to see how much in common we have.

A gift makes up for that. Makes up for the 30, 40, 50 years I, as a human, might’ve missed out on knowing you. A condom might be a way to get intimate too quickly, but a gift is a good level of intimacy to quickly stand out, to get to know someone, to make  up for the horrible lost time we have simply by being too human and stuck in our bodies , in our worries, in our fears. Additionally, if we want to stand out for some reason, breaking the normal boundaries of “hello” – conversation – “goodbye”, GIVING something right then can help.

When I meet you, here are some possible ways I can traverse that bridge.

A)     I, obviously, can give a gift. I can give a book I’ve written. I can sign it with a personal note. I can even give my comic book!

B)      Based on what I’ve discovered of your interests, I can give you a gift with those interests in mind. If you like yoga, for instance, I can do my research and find some oddity in the yoga space that would stand out and be of interest to you (as opposed to just a “how to do yoga” book).

C)      I can give you a stuffed animal. What!? You say. I’m not a kid! We’re all kids. The universe is 14 billion years old. I’m 43. One friend of mine is the CEO of a company that makes an anthrax vaccine. I haven’t seen him in several months. But I have a stuffed Anthrax molecule all ready to go for the next time I see him.

D)     I can write about you. Many people in my life have meant a lot to me. It’s easy for me write about someone and have that writing cause great pleasure for the person.

E)      I can write to you. A friend of mine just turned 30. She asked, “what should I do that’s special.” I suggested she write to everyone who has had a positive effect on her that’s made her into the great person she is now. Some of these people she hasn’t even seen in 10-15 years. All of them were very happy to hear from her and some reestablished their connection and were even able to help her.

F)      I can give you something meaningful for your child. One time I had a secretary in a business that was going down in flames. Everyone was going to get fired. I couldn’t do anything for her. I was going to lose my job as well and basically disappear for years. She had a son who liked Charlie Brown. I gave her an animation cell from one of the Charlie Brown movies. I may never see her again. But for me it was meaningful to somehow make up for the difficulties she might’ve been about to get into as well as reward her for the help she had given me.

G)     I can give you a Porsche. Well, not really. I won’t do that. But one time I helped Adeo Ressi  (now with “TheFunded.com”) sell a company he started. Another investor of his, Ed Bennett, had gotten yet another investor involved in the company, Joe Barton. Joe was so grateful to Ed when the deal was done (and he made a cool million on a $50k investment) that he bought Ed a Porsche. For me, he called me and said, “thanks”. That’s ok. But for me, when someone makes me a lot of money, I always return the favor somehow.

H)     I can give you an introduction. When I learn more about you, it’s easy for me to say, “You MUST talk to so-and-so”. As long as I do that with respect (I don’t want to waste anyone’s time) it builds my value as a connector and it puts in touch two people who may prove meaningful for each other.

One time I was trying to win over a potential investor. A guy.

A friend of mine had just moved to LA. A girl.

I said to him, “you two should meet”. So they did. They met for a coffee and it was great. Then they set up a second date. He showed up at her place with a huge backpack as if they were about to go hiking for the next month. She said, “Why do you have this huge backpack?”  He said, “Because I’m moving in!” And he did. And they went out for six years. I can’t say it was a match made in heaven (they are no longer together) but they were happy for a long time AND he invested in my fund. Mission accomplished!

I)        I can tell you a secret about me. Secrets are intimacies. If you share one that is meaningful then the other person feels “in the club”. I don’t say this in a manipulative way. I certainly wouldn’t share an intimacy with someone I didn’t like or bond with in some way. But it’s like hitting the accelerator on intimacy when you share a secret, even when its with a potential customer, client, lover. The first time I met Claudia I may have stepped over the line when I told her how when I was a kid I used to try to learn how to astral project in order to see other girls naked. She laughed (PHEW!) and that intimacy let me in the door a little bit more. I’m glad. If the secret is also combined with advice, then all the better.

J)       I can listen to you. We’re all in a tough spot. The bottom 99% sometimes feels like the bottom 1%. I’ve met very few people who aren’t filled with regrets. Who want to discuss their flaws in someway. Who want to share some problem they have or advice they seek. Sometimes they don’t need a problem solver. They just need someone to listen to them. People have big brains and can usually solve their own problems. But if the problem is trapped inside the brain then it’s hard. Sometimes it needs to be let out and shared. That’s a great gift you can give someone. To listen.

K)      I can say thanks. People aren’t thanked enough. One of these days Ill be able to thank all of the people who have helped me. Or, at least, a quarter of them. It’s a big list and I’m bad at following up with people. But thankfully, I’m getting better.