How I Would Unschool My Kids

My dad hit me when I got bad grades. Particularly when I was young and got a bad grade in “Conduct”. Happiness was an “A”. Even better: an “A+”. Sadness was an “F”. It was almost like a joke. Like the only way to get an “F” is if you tried to screw up almost as much as you tried to get an “A”.

But  in twelve years of basic schooling I can’t’ remember anyone asking where the “E” was. It goes A, B, C, D (which was really horrible to get a D. It means you were trying somewhat (so as to avoid the “F”) but you were just plain stupid and got a D. Not even a C.) and then, the magic “F”. Which was more than just a letter but a one-letter acronym. None of the other letters stood for anything. They were just letters. They could’ve been replaced by numbers (Claudia tells me in Argentina they were graded by numbers from one to ten. No letters). It’s not like “A” stood for Amazing. Or “B” Boring. “C” Crazy. “D” Dumb. You could’ve just replaced them by 1, 2, 3, 4. Or a “1+”. But F was irreplaceable.

“F” stood for “Failure”.  [Note: except when I was really little. There was “O” for outstanding. “S” for Satisfactory. And “N” for needs improvement. I got an N for conduct and it’s the first time I remember my dad hitting me after the teacher told him I was always calling her old, which she was and there is no shame of that but I only realize that now that I am as old as she was.]

So why no “E”. I think teachers got together 5000 years ago. Maybe 10,000 years ago and came up with the horrifying conclusion: Some students might think “E” stood for Effort. As in, “at least I didn’t get an ‘F’. I got an ‘E’ which means I put in an effort.” And doesn’t that go along all too easily with the lie teachers say, “I’m not going to judge you on your grade, I’m going to judge you on the effort you put into this class.”

Did they ever really judge you on that? And if they did, do you really think they would want you to get an “E” on a test and then have to put up with your arguing at the end of a semester when you would say, “See! I put in the effort! I got an “E” on everything and you said that would be how you would judge me.”

“This is awful”, said a teacher at that first convention of the union of the national teachers club. “We have to take the ‘E’ out of the alphabet.”

“There is an E! Just not in grades. Why is this such a difficult thing to understand? If we put an ‘E’ in there then our schools will NEVER get funding. All our schools depend on our students, smart or stupid, doing well on those standardized tests where they fill in the multiple choice circles and cyborgs read them and grade them and the better they do, the more funding we get. If we put an ‘E’ into the system the students might clog up the pipes with Effort instead of Amazing. They might even think “E” is for Exceed because at least it beats Failure! WE CANNOT HAVE AN ‘E’!” 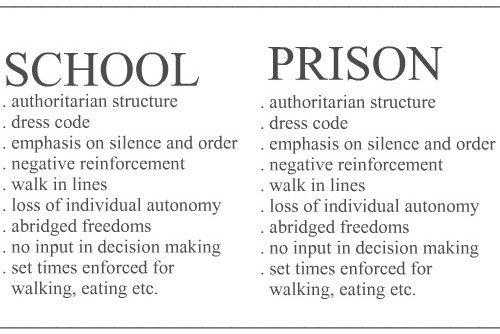 I doubt that conversation really happened. They really backed themselves into a corner. They thought by using letters instead of numbers that would fool kids into some state of confusion where they really didn’t know how they did. Like, “is a B good or bad?” But everyone knows where they stand when it comes to 1 through 10.

But now they were stuck with the “E”. Until they decided to strike it from the alphabet. But only some of the time. Except for that one time an entire novel was written without using the letter “e”. That guy knew what he was doing. The insidious removal of the most common letter in the English language.

Because that’s what English is about. It’s not “Anglo”. It’s not quite “Saxon”. It’s not “Latin”. But its a weird mixture of all three, concocted like a test tube baby in some scientist’s laboratory when the aliens landed and impregnated our ancient Mothers with the sperm from their dying planets (since they came from a Federation of planets surrounding a supernova, or perhaps supernovae (there’s that “E” again) ).  So we can keep on experimenting and investing and twisting and testing. Now “google” is a verb, a noun, a business, the beginnings of an artificially intelligent singularity, a map, an email, a social network, and a photo album with the flowers as bookmarks. We don’t need those anymore thanks to Google. No memories are special enough to mark them with a flower, thanks to the newest word in the dictionary.

Ugh, trying to unravel the Rubik’s Cube-like scam of lower education is a full-time job. Once you get a side with all one color you realize you’ve hopelessly prevented yourself from getting the other side to be one color.

I have not read much about home schooling or unschooling so I am no expert. But I’ve thought about it. And this is how I would do it if my kids were to let me unschool them.

A) First, (and again, this is without reading about it at all so I, at best, uneducated on the topic). I prefer the word “unschooling” to “home schooling”. I assume home schooling means I replace the teacher, buy them science textbooks, math, Canterbury Tales, etc. I don’t want to do that. That sounds boring to me and I assume to them as well. Unschooling sounds more like it – i.e. just completely no education at all.

B) Only one requirement: read one book a week. It doesn’t matter what book. I will pay them 10 cents a page. WHAT!? How can you pay your kids to learn? Well, I want my kids to get used to being paid for doing things they enjoy. Later in life (just a few years really) they will have to do it anyway. Why not get used to being paid for something they enjoy right now? This way they will know easily to avoid getting paid for things they don’t enjoy. (this is hopefully a way to avoid them going into a life of prostitution).

Then we talk about it. Then we visit the bookstore and they get to browse other books and see what they like. I get a synesthesia of experience when I go into a bookstore, some sections have bright colors and draw me to them (fiction, current affairs, philosophy, art, comics, history) and some I can just feel the drab greyness (interior decorating, crafts, children). They would browse until something pulls at them. Then they would buy it and read it.

C) Every day: I’d set out drawing and painting materials. They’d also be encouraged to keep a diary. I want the creative neurons going. I can’t force them to do this. But maybe they would want to.

D) At least an hour of sports a day.

E) I’d set up playdates for after school so they can get socialization. Or playdates with other kids that are being unschooled or home schooled (there are more than you think out there). My kids think that all home-schooled kids are “weird” because they aren’t social. But I ask them, “when do you talk to your friends anyway?” And they say, “after school”. So that argument is out the window.

F) The rest of the time they can do whatever they want: eat, read, watch TV, sleep, blow stuff up, do nothing but stare at the wall, walk around the block, go to the movies. Whatever. In fact, I hope they do a lot of nothing. People get addicted to doing “something”. What’s so great about “something”. I like to do nothing. Even when people do nothing they try to label it: like “meditation”. Ugh, what a boring thing: meditation. Try, “I just did nothing. I even thought about nothing in particular.”

When you are capable of actually doing nothing (not so easy after decades of “something addiction”), there’s a deep well that springs up, and fills every corner of you, crowding at the anxieties, the fears, the pressures put on you from government jobs colleagues bosses friends family. The nothing replaces all the vomit they try to kiss into your mouth.

By doing all the above they have more opportunity to discover their passions, more play time, more creative time, just as much social time.

My answer: Why? It doesn’t seem like adults are any good at that so how did experiencing it as a kid help them?

What makes me an expert on unschooling? Absolutely nothing. And that’s the point. I just don’t want them to do any of the 100 bad memories I (and just about everyone else) has about standardized schooling. Why should they have to go through with it?

And I’m going to grade them every week. I’ll give them a big piece of paper with the letter “E” on it. And we can talk about what it means. Maybe every week it will mean something different. That sounds like fun.