How To Be The Best At Any Game In The Universe

I was having a weird argument yesterday with my ex-wife. I was trying to say, “I’m stupid” so she was disagreeing and accusing me of lying. So I kept insisting.

“I got bad grades all through high school, graduating in the bottom half of my class, and then I got thrown out of graduate school.”

“How’d you even get into college then?” Very skeptical.

How can you swindle that?

There were two tournaments: Southern and Northern New Jersey. Then the winners of each tournament would meet and play each other for the championship.

I went out of my way to play in the SOUTHERN New Jersey tournament.

Northern New Jersey has all the people who were only recently kicked out of New York City (smarter) whereas Southern New Jersey occasionally threatens to secede from the United States (stupid).

So I played there and won. And then I played the winner from the North, who happened to be the winner the year before. All I can say is: I got lucky and I beat him. In one game, anything can happen.

I had mediocre grades throughout college. I was thrown out of graduate school, and in my second day at work I crashed the entire network and lost all of the CEO’s emails.

When I was applying to graduate school, I hacked into the emails of one of the professors who I asked to write me a recommendation. I thought he liked me.

I read all his emails, including love letters to both wife and mistress. In his “recommendation” for me he said, “DO NOT accept this student to your school.”

He turned out to be correct. But I was still upset.

I had already sent out all my applications and references, including his. I got rejected by every school except the one school that was working on a chess computer. That chess computer became my office mate.

So game playing got me into school. And then game-playing got me thrown out because I got obsessed with a game called, GO, and it’s all I did while I was at graduate school. Well, it was one of three things I did. But none of those things had anything to do with school.

So in the past 25 years I’ve mastered, at different points: chess, poker, backgammon, Go, hearts, Scrabble, checkers, othello, and probably a few others (I would say Monopoly but I’ve never played in a tournament so I can’t claim that I’ve “mastered” it whereas all of the other games I can point to some proof).

The most valuable skill when mastering any game is the ability to say “Look here!” when all the action is happening at some other “There!”

The reason why great games are always such a metaphor for life is because the same principle is true for life. I don’t mean this in an insidious way.

I think, in general, people do this. Banks say, “You should buy a house! We’ll lend you the money!” When they really mean something else.

Colleges say, “Of course you need an education! And by the way we just raised tuitions 17%!”

Your job might say, “Of course we’ll match your 401k! But you have to stay at the job for ten years before you get it. And don’t look at all these fees we charge.”

There are many examples of people saying “you should do this!” when what they really mean is, “you should give me all of your hard work and money and we’ll see what happens to you later.”

Most of the big structures (and people) in our lives are set up to take our money, our passion, our time, and then we are left alone and wondering where that time was spent.

Ultimately, there is nothing to practice.

To know who you are, just be yourself. That’s the true master. You don’t have to practice to be who you already are.

We are taught from an early age to not be ourselves. To be obedient and fit in with the other people stamped out of human clay. To fit in. To do the right thing.

It’s very hard to be you. At least, I find it to be hard. I’m shy. I’ve often been scared. But being calm with who I am has often resulted in the most satisfying moments of my life.

It’s important to understand when the game is being played on you. When you are the harp and another’s fingers are making music out of you. To learn the ways in which people and institutions try to play you.

Learning a game is like learning a language. Once you are good at two, the third is easier. And so on.

And once you get good at all games, you never have to worry about them again. You are the master of the game instead of letting anybody else be the master of you.

Even just understanding how to get good at a game is enough. You don’t need to actually master a game to know when someone is trying to be a master over you.

You don’t have to practice to be anything else. It took 13 billion years for the universe to make specifically you. So that must mean you’re pretty something. Or you’re something pretty.

So here’s the secrets to being the best at any game you want to be the best at: 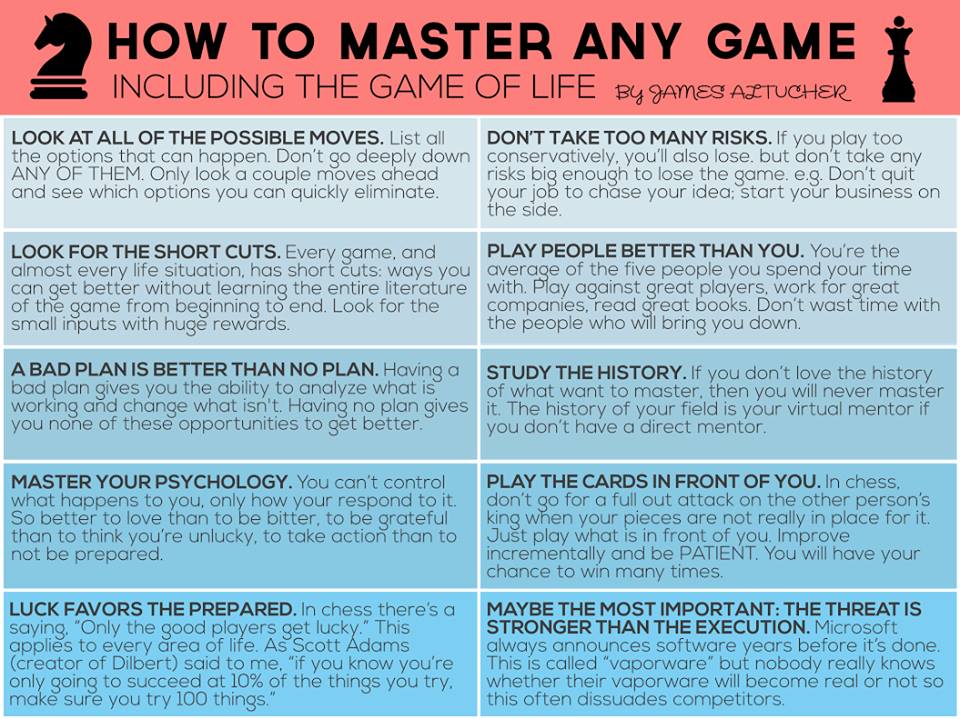