How To Become a Jedi Knight

In 2005 I was going to go out of business (again). My biggest investor had to pull out. His business had failed. He had a nervous twitch and whenever I ran into him he was constantly twitching, “I need my money back,” he told me.

But I didn’t have it I had invested it. It would be a year before I could give it to him. So I didn’t know what to do. One time he threw a chair at me and ran out of the room. But there was nothing I could do.

So I did what any normal 37 year old man in the fund of hedge funds business would do. I bought the book, “The Tao of Star Wars”. Because I knew deep down if I just surrendered to The Force then my business would be ok. 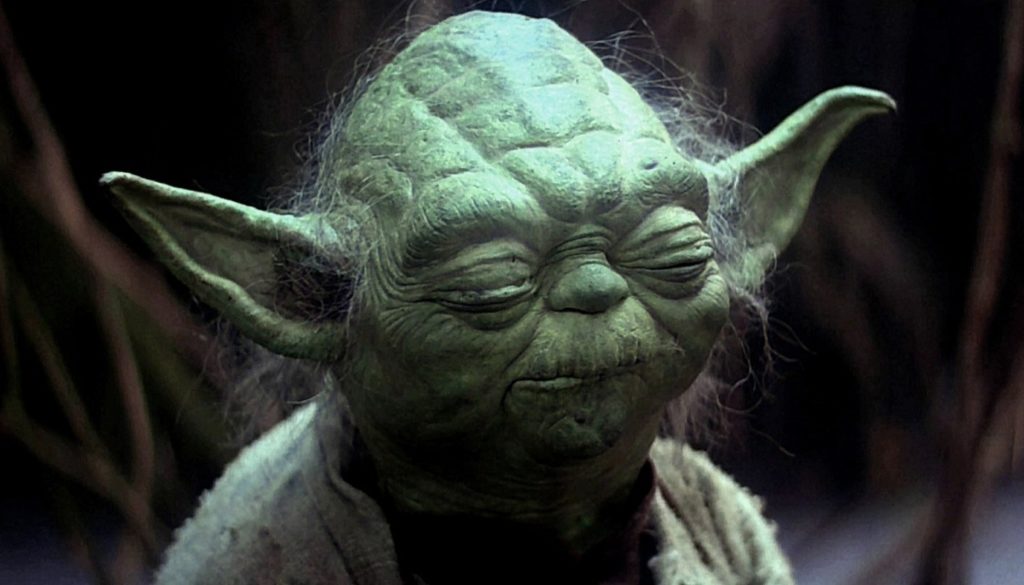 I read the book every night before I went to sleep. I had confidence that it would save my business.

And it did. Or I did. Or something did. My business didn’t go under. That wouldn’t happen for another year or so.

A few weeks ago Cheryl Richardson, author of the book, “The Art of Extreme Self-Care” asked me and a bunch of people what movies impacted us the most. I jumped right out there, “Star Wars” because I believe in The Force. I think someone else said “Schindler’s List”.

I saw Star Wars when I was seven years old and it changed my life.

I tried to explain the story to my dad and he gave me wise advice, “I can never follow when someone tries to tell me a story”. I now repeat that sentence almost every day to people who try to tell me boring stories.

Nobody knows what’s true and what’s fake. We all have faith in something: usually a mixture of some personal beliefs with modern science. I am like that also. Mostly, I just believe in what works for me.

The Force works for me. I admit it.

Here’s how to be a Jedi Knight

A) Rest when you have nothing to do. When Qui-Gon is fighting Darth Maul in The Phantom Menace a transparent door closes, dividing them. Darth Maul paces back and forth and Qui Gon simply sits and rests and seems to be doing nothing.

It doesn’t matter to me that Darth Maul kills Qui-Gon at the end of that fight. Qui-Jon comes back later. Whatever.

In modern society we all feel like we have to be like Darth Maul. Pacing, finding a “purpose”, being anxious, stressed, waiting for doors to open. But how great is it to just rest and be happy and not move when you don’t have to.

I will tell you: it’s great. 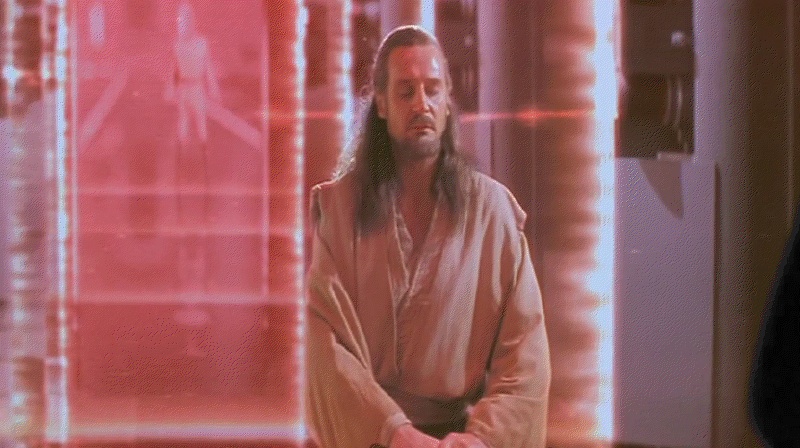 B) Less. Get rid of everything you don’t need. Obi-Wan lives in a cave or a hut for 40 years when he’s on Tatooine. Yoda, who was ruler of the Universe, lives in a swamp after he loses his battle with the Emperor. They were still capable of laughing, of living, of staying healthy, of being able to train the next generation. They didn’t need anything to keep them entertained.

Of course, I have to keep repeating, it’s a story. But this is the way I would like to live.

C) Practice being “good”. Being a good, compassionate person is not something like “having two arms” or “being able to see”. It’s a quality we develop over years and thousands of hours of practice. Most people are not good people. In business, in art, in almost every “world” I’ve been in, most  people I meet are pretty gray to black. It takes practice to be the person who is a source of compassion and honesty.

Supposedly it takes 10,000 hours to master something. Unfortunately, most people spend 10,000 hours trying to be a jerk to others. If all you do is put in your 10,000 with small kindnesses, then the universe will return that many times over.

D) Read. Clearly George Lucas read many spiritual texts before he wrote even the first Star Wars or conceived of the whole saga. I’d start with the Tao Te Ching and then various interpretations of it. Then I’d go with any stories of Chuang Tzu, Buddha, Thich Naht Hanh, and I’d read “The Art of Happiness” by the Dalai Lama.

I don’t think one should be a “taoist” or a “Buddhist”. I doubt that Buddha was a “Buddhist”, which is just a label. Nor should one be a “Jedi-ist”. There’s no reason to separate yourself out from all of the other people. Just read texts that are inspiring.

E) Think About What You Read. If you read one page of the Tao Te Ching there’s probably enough in there to think about it for a year.  Try it. There’s a saying, “reading spiritual texts is good, thinking about them is 100 times better, practicing what you read is 100,000 times better.” So think and practice.

F) Health. In all of the movies I never saw an out of shape Jedi. Although there seems to be a deep spiritual componenet to being a Jedi, clearly there is a physical health component as well. They are jumping out of spaceships, fighting with light sabers, and they can probably run a four minute  mile. Heck, even Yoda at the age of 800 is jumping all over the place.

Health is not important. But sickness is. If you are sick, then your thoughts will be stapled to that sickness. You can’t get rid of it. You’re in pain and pain takes up the mind. This is why “The Yoga Sutras” is not about looking good in a yoga studio and picking up girls (although that is a good use of it). It’s about staying physically and emotionally healthy so you can focus on your spiritual life.

G) Be around other Jedis. Once Anakin starts hanging out with Darth Sidious he becomes a bad guy. Here are some things that are hard in life: being honest, being kind, trying to add value to others. These things take time and energy. When you are around people who steal your energy then those things become even harder.

H) Be open-minded. The difference between Luke and Han in the original Star Wars. Luke is willing to believe. There’s a lot of issues people get “stapled to” almost as if they were sicknesses. Some core issues: pro-choice vs pro-life. war vs anti-war. college vs no-college, global warming, etc.

I’m not saying one side is right and one side is wrong. When you find yourself thinking, “This side is DEFINITELY right” be willing to open your mind and look at why the other side thinks the way they do. It’s never for the stupid reasons you think it is. Issues are just ways for the mind to practice being open-minded. Strong opinions are ways for the mind to get stapled to this planet, filled with so many myths and manipulations.

This is good practice for the actual hard decisions you have to make in your life. Else your brain get’s too soft and one-sided. 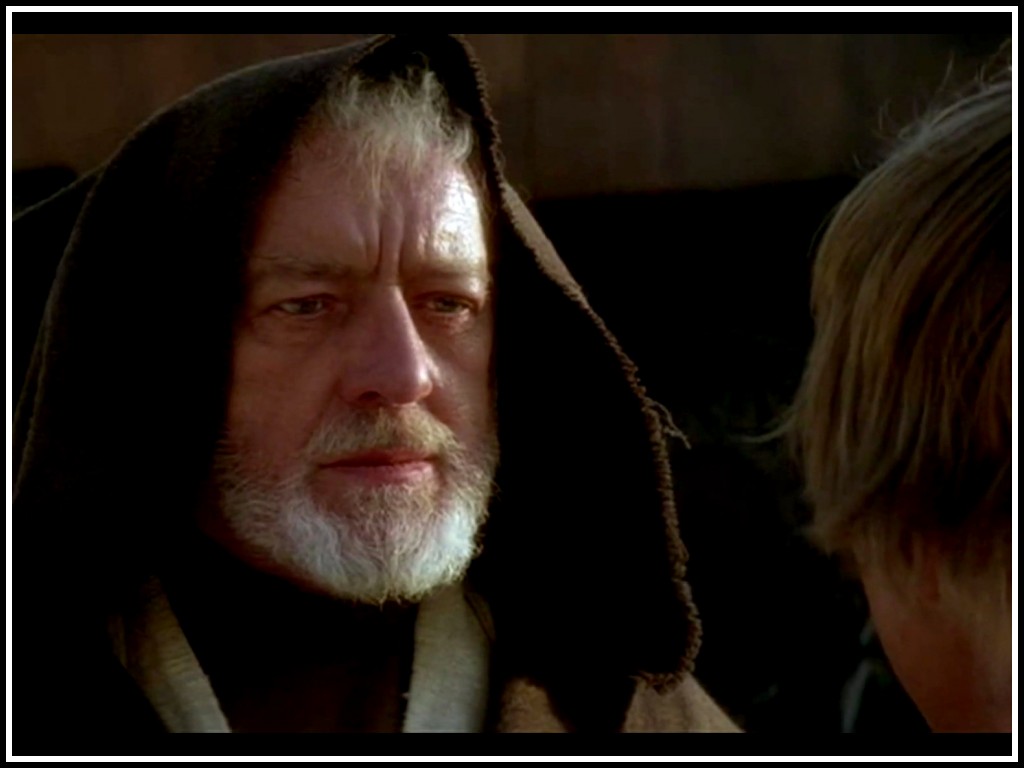 I) Trust. Luke has to watch Obi-Wan die. Han has to be captured by bounty hunters. Anakin has to be recruited as a little kid. Qui-Jon has to die. Yoda has to go into exile. Bad things happen. But if you follow steps A-H, bad things happen in cycles. Good things also. Trusting that the kindness you are putting out there is compounding in a secret bank account for you means waiting for that bank account to deliver it’s returns. It will.

J) James is crazy. Yeah, I am. But I believe it.My business did get saved. Then it went out of business. The my next business got bought. Then it went down the drain. Then my marriage disintegrated. Then I got married again to the woman of my dreams. Then I lost all of my writing jobs. Now I write more than ever. Then I lost many friends. Now I have more friends than ever.

Everyone thought “Old Ben” was crazy. And he probably was. He died at the end of that movie. Just like the rest of us will.