We all have a disfiguring, gross, disease that oozes emotional pus, destroys our sex drive, and cripples us in life. It started in 2000 with the dot-com bust. There was this infinitely glorious future promised us: of robots and networks and infinite productivity, even ever- increasing salaries and wealth, and the promise of infinite love from any part of the world that we sought it.

Then it went bust.

Then the World Trade Center blew up. Then Enron was corrupt. And Worldcom, and Tyco, and countless other companies. I can tell you that the three mentioned above were only the tip of the iceberg. Most of the corrupt companies (about 90% of the Fortune 500) got away with it and minted countless millionaires and billionaires.

Then we had a glimmer of hope again. Forget the stock market. It’s’ about owning a house! Hooray! Thank god I bought that house. It’s up 300%. And I can get my credit card attached to my equity line which is attached to…nothing! Holy cow!

And then it went bust. It went bust as early as 2007. But then something worse happened.

All the banks had been hiding the fact that it went bust. But in 2008 the tide finally came in. Every single bank was naked and we all saw it. Ewww! Gross! Because all the banks were old men. You ever go in a locker room with all old men? One day I’ll be one of them and I can tell you this: I am not going to hang around naked in locker rooms.

So we were in shock. I  literally thought, correctly, that the ATM machines would stop working.

And then, it got worse!

Housing prices went down probably another 20%. Unemployment doubled. Under-employment (where you get a new job but it’s a 50% or more paycut) probably tripled. Unhappy employment is probably up to 90%: Where the stress of the job, the politics, the depression, the anxiety, is more than your ability to handle it without health or relationships breaking down.

And when things even feel like they might get better for a tiny bit we have Post-Traumatic Societal Stress Syndrome (PTSSD) hit us:

A)     An overwhelming feeling that everytime it was good, it was a myth, a product of mass hypnosis. “It’s never going to get better”, we think.

B)      A fear that even if it gets better, it will be two steps forward, three steps back. Maybe our house will go up in value, but then we will lose our job, or our business, or our marriage. It can’t get better because it’s been bad for so long.

C)      And if our internal voices don’t slow us down with their webs of anxiety, then we always have the external voices to contend with.

What external voices. Hold on a second. I’m going to fire up my Internet Web Browser and look at the headlines on Yahoo.com

So don’t worry, even if you think things are good, the headlines will always convince you things are bad.

Let’s say today you woke up feeling depressed, anxious about your job, your money, how will you pay for retirement, or kid’s college education, or maybe how will you have a tiny bit of freedom to do the things you always wanted to do. But then you get this crushing sense that you will never get there. That things will always be like this, a slow draining of all hope out of society as money goes to zero, innovation dries up, and all the things that people once enjoyed just become reminders of how they are no longer there, a huge absence eating up our souls.

The good news is: THERE IS A CURE

B)      Understand that it’s not just you. EVERYONE is experiencing this disease. Tell yourself, everyone I see today is experiencing this, not just me. The fear, the loss of hope. The anxiety. Anxiety is very debilitating. Sometimes just telling yourself things won’t get rid of it. But at least knowing that you are  not alone in it will help.

C)      Forget the past. Since the “PAST” is a symptom of this society-wide disease, we can be comforted that our brain has outstretched the importance of just about every event in the past. Those synapses grew stronger, weakening the parts of the brain that provide hope. Anxiety because I went broke in 2000 won’t stop me now. So forget it. It doesn’t mean the anxiety will go away. I feel the anxiety in my body right now. But I don’t have to name it or associate it with some past event. I don’t have to talk with it or “deal with it”. Just acknowledge something is there and it’s annoying.

And eventually that past event slithers away when it realizes it’s being ignored. And eventually also, the anxiety will start to dissipate.

D)     We all want change right now. Every single one of us. But the big changes often elude us. You can’t just quit your job if you have a bill to pay tomorrow. Maybe you can or maybe you can’t. I don’t know. But you can practice. We all know the negative things we are going to do today. They might include: watching too much TV, gossiping, snacking on crap, not sleeping enough, watching or reading the news, being angry at someone who will be dead within 100 years, playing too much computer solitaire, and on and on. Practice one change. Pick one negative thing and don’t do it today. And congratulate yourself at night. You did the change! You can change! Practice a little bit each day. Use tdp.me to track it if you want.

Little changes add up. They add up to the cure. And since nobody else is getting cured, you catapult ahead.

E)      Plan your future. Post-Traumatic Societal Stress Syndrome is caused by events in the past. They are not predictive of the future. They aren’t even predictive of how you can be feeling right now if you want. This is where it’s important to exercise the idea muscle. When I can’t take it anymore I start thinking of other things I can do. I’ve written this before but if you don’t exercise the idea muscle, it atrophies quickly. When it atrophies, all of your ideas are bad. Or 95% of them are. You want to get to the point where you are at least 50-50. That means you have to write ideas every day. Particularly if you want change in your life.

It takes six months, from my view, to build up the idea muscle again. Start today. In six months your life will be different.

Today my ideas included: potential clients for various businesses I’m invested in, ideas for articles, ideas for a novel with potential outline, ideas for talks, ideas for a 3 day course I’m giving in January. Later I will throw out the list. Who cares what it said. The point is making the list. The good ideas will stick with me and I’ll expand them into future lists. At some point an idea will be good enough I’ll make the jump and do it.

F)      Right now. My daughter woke me up at 4 in the morning. She had a nightmare. It’s the first day of two weeks she’s going to spend with me. She had a nightmare that the house was being burglarized. She wasn’t feeling safe. I went downstairs and slept on the couch right next to her room but a few minutes later she came out and said she still couldn’t sleep. I told her she can close her eyes and count the number of things she’s grateful for. She went back in her room and fell asleep for the next three hours. Right now you can remove the past, forget the future, and, with every breath in, think of someone or something you are grateful for. With every breath out, imagine saying a “thank you” for that person, event, or thing.

G)     MY NEWSLETTER. I started a newsletter a few months ago. Ramit Sethi, who wrote a bestselling book, “I Will Teach You To Be Rich” suggested I do it so I did (I’m easily suggestable). I offered my last three books for free for anyone who signed up. One blogger friend of mine wrote, “I can’t figure out James Altucher’s business model.” That’s because I have none. I have no idea what I’m doing or why I’m doing it. With the newsletter, the content hasn’t been that much different from the blog. Sometimes I try stuff out on the newsletter and later rewrite for the blog. Sometimes I just write random stuff.

But I have an idea now. Every day, or every other day, I will write whatever exercise I’m going to do that day to help ME with the post-traumatic societal stress syndrome. If you sign up for the newsletter, you’ll get that exercise also and you can elect to try it or not. Maybe it will be an eventual cure for all of us.

What good is all this? Since I’m pretty sure 99%+ of the world is going through this horrific disease, the few of us who work to overcome it will have an advantage. You know the saying, “in the land of the blind, the one-eyed man is king.” We’ll have an advantage in health. In entrepreneurship. In productivity. And ultimately in happiness. 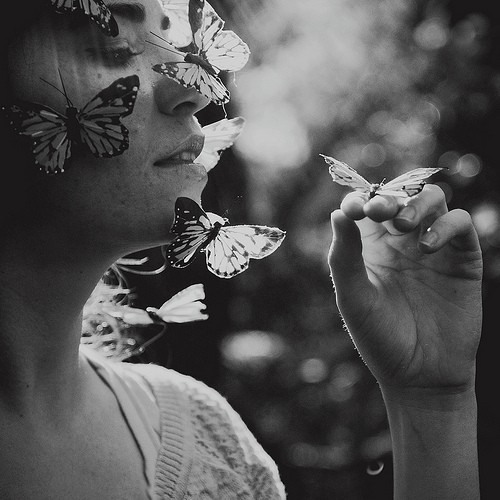 I want miracles. The first miracle is to shed the cocoon of the caterpillar and fly like the butterfly. We’ve had a long hibernation. Now is the time to be free.