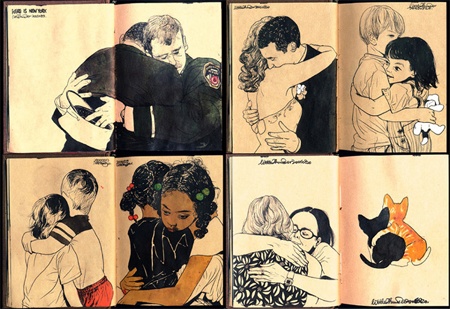 Many people have it far worse. Claudia’s mom jumped out a window when she was a kid. I’m glad that didn’t happen to me.

And not being hugged as a child makes it very difficult for me to hug now. When I hug, it’s very special for me.

I feel like I don’t really know how to do it. You put your arms around someone and you squeeze a little.

I put my right hand a little higher and my left hand a little lower and I sort of lean to the left and give a little squeeze. When it feels good it tells me I’m doing it right.

Some people also like to kiss on the cheek when they hug. I used to do that but it never really felt right.

Hugging is very intense for me. Adding kissing to is too much. I feel awkward. I can’t tell if I gave too much emotion or if people would think I was weird or if I did it wrong.

Because my parents never hugged me, I try to hug my daughters a lot. I like doing it. I don’t see them as much as I would like to.

Nothing makes up for that but at least when I hug them I think it tells them I love them and that I think they are good people that I like to be around.

As I write this, it almost reads like I’m a sociopath. Like I don’t know how to have emotions so I have to fake the actions that normal people do. But this is not true. I really like to be close to people and feel friendship and love with them.

But I don’t know how to physically communicate that with them. Unless I’m in love with them. Then I probably overdo it. Like I climb all over them.

It’s like being in a maze in a circus. You go down all these different corners and there are clowns everywhere.

Clowns are funny and scary and fantasy and love. And mazes are filled with  mystery with magical gold at the end.

That’s what a hug is for me.

For a long time I felt uncomfortable even shaking hands. I had an excuse ready. I said, “George Washington would always bow so I’ll bow.” And then we would bow. That’s how I avoided touching people.

And when I was CEO of my first company, I got a masseuse every Friday to give massages to all the employees. But I was the only one who wouldn’t get a massage. The other employees would  make fun of me. But I assumed if the masseuse touched me I would fall in love with her.

I’m pretty confident that I can’t be alone in this. Touching is very intimate and yet very social. We do it all day long. And yet it’s a prelude to having sex. The rainbow of emotions is in between. Double rainbows are love.

One time I was at a funeral of a relative. There was a woman there I had a crush on. Everybody was hugging each other because it was a funeral. So I hugged her more than once. Every time I passed her I would hug her. Finally I got the sense that she thought it was weird and then simply because she thought it, it did become weird. Actually, it was weird. I can’t blame it on her. I was weird.

I started this post because when I was a kid one of parents threw a knife at me. But when I think about it, it wasn’t a big deal. The knife wasn’t sharp, it missed me by about two feet, and even if it hit me I doubt it would’ve hurt me.

And I was an annoying kid so I’m not even being modest when I say I certainly deserved to have a relatively tiny blunt object thrown at me and miss by a mile. Who wouldn’t throw a vaguely blunt object at a whiny ten year old?

I wanted to feel sorry for myself but I can’t.

But I can say thank you. Because now when I touch people it means so much to me.

To hug is to love.

Because it took so many years for me to hug someone I know the secret of what a good hug is. It’s not the same as “hello”. Or “I missed you”. Or “You look great!”. It’s not a hand shake. It’s not a fist bump.

When I hug, I give a piece of myself. A little emotional baby.

And that’s why I now have lots of babies, all through the world. Daddy.