How to Quit Therapy

My preparation starts about 12-24 hours in advance. I’m going to pitch a story idea. The worst thing that has happened to me this past week. The thing that I feel the most DOWN about. Dig deep. What happened? Who? Where? How? Why am I so upset?

No. Deeper. There has to be real pain there. BLEED.

I go into my mental treasure chest for this sort of thing: (Did Claudia do something? Did my kids? Family members? Friends? Am I too anxious about blog statistics? Bank account? Did someone rob me, screw me, punch me, or worse yet, insult me)  I need to script it out, play it back and prepare prepare prepare like I’m pitching a movie. Then I pitch. 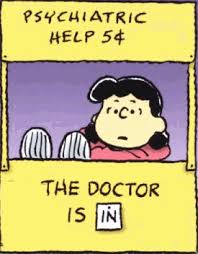 When I get sick, I go to the doctor, then pay for the appointment. Then, in most cases, I never have to go back. That happened last week when I thought I was going deaf. Went once and now I can hear again. My ear shat out two inches of wax. Problem solved. Or was the problem solved? Now I have to pay attention to everyone. Maybe I was secretly avoiding going to the doctor so I could ignore everyone. Hmmm? Is this my movie of the week?

Therapy is different. You pay the same amount you pay a doctor. But then you go back next week. Then the week after that. Forever. There’s no cure for your brain. Original sin requires therapy every week. Being born means your brain is ill.

The worst are the people who have gone for twenty years. You can’t step in front of them without “crossing boundaries” or “projecting” or worse yet, if you use the pronoun “I” then you have watch out for accusations of “classic narcissism” or “borderline personality”. I’ve been accused of all of these. By the way, it’s the people who know you the best who have the DSM-IV ready in hand to diagnose you.

I threw a party once where I wrote some software beforehand so that invitees could answer questions and then get their DSM-IV diagnosis. Then at the party I hung up on the wall everyone’s diagnosis. Most people were Schizoid Affective Disorder. Some people were simply psychotic. Other people were just depressed and then were embarassed to see their names on the wall.

I have no reason to bash therapy. I like it. I like talking to someone about my problems. But, you don’t really need to do it. Someone asked me yesterday during the Twitter Q&A I hold every Thursday what do I do when I am feeling down?

But before you sign up for therapy try one of the below things. or all of them. Basically, there are four categories below: things to get off the floor, ideas to get you happier, ideas to take the next step forward, ideas to handle the worst case scenario.

Don’t listen to any of these items if you don’t want. But this is what has worked for me when I’ve been feeling down. Some of these are obvious. They are the things you see on every “10 things to do to be happy” blog on the Internet. But they help. Other items are ones that have worked for me. Don’t believe them if you don’t want. But try and see.

–          Exercise. Exercise kicks in those endorphins. You feel better, you look better, you’re too tired for the mind to be overly active. You get rid of bad toxins when you sweat. Everything is good about exercise.

–          Positive people. I call people who will help me to feel good about myself. Now, this seems like a copout. Shouldn’t you just feel good internally? Sure. But that’s hard! Good to be around people who don’t insult you, who say good things about you, who make you laugh, who inspire you. When you are down, make a checklist of the kind of people who  will be ALLOWED to be around you.  And only let those people in. This is the great thing about social media. You aren’t limited anymore to just the people who live on your block. Or your family. You’re only limited by the 800mm people who have signed onto Facebook.

–          Paint. I have some watercolors. I have a pad with big paper. Paint something. I am not a good painter at all. I make a square and some triangles and call it a house. But it’s oddly refreshing when I paint. Creativity triggers neurons that shut down the neurons that make you sad. I just made that up. But it seems correct when I think about how I feel while I’m painting. In the fall of 2008, when both the economy and my marriage were falling apart I went to a museum every day and sat in the bookstore and read books about art. I don’t know why I felt the need to do it. I just did it. And it felt good. Then I would go home and sleep in a hammock. Hammocks are fun.

–          Shake it up. About a year or so ago I was having a bad day in the stock market. I was having a bad day for other reasons as well. Near my house there’s a little island with a little beach and you can swim in the Hudson River. So, for the first time in 5 years, I went swimming. It felt good! Do something you don’t normally do. List 5 things you can do that you don’t normally do.

–          Sleep. Sleeping is the #2 funnest thing you can do in the world. (Sex being first but that’s so obvious I’m not going to even put it on this list). The key, if you are feeling down, is to sleep solidly for more than eight hours. Do whatever you have to do to sleep more than eight hours. Take herbal remedies. Go to a doctor and get medication for sleep (usually addictive but worry about that later). The key is to sleep. The less you sleep the more anxious you are. There’s a billion studies on this. Sleep rejuvenates you, lowers stress, incites creativity, and in general gives you greater peace of mind.

–          Laugh. Here’s what I’ve been doing lately when I’m down. Watching the BBC show “Peep Show” (second only to “Arrested Development” in getting me to laugh), watching the Louis CK special that he is selling on his site. About to buy the Aziz Ansuri special that he’s selling on his website. Watching old episodes of Jon Stewart on YouTube. Watching any good standup I can find on YouTube. Lately I’ve been re-reading “Happy Endings” by comedian Jim Norton (See, “How to Become a Comedian” where I write about Norton). Laughter reduces blood pressure and reduces two stress-causing hormones: cortisol and adrenaline.

Also, I know through speaking to hundreds of audiences – the more people laugh during my talk, the more likely they are to remember the talk and remember me. So anecdotally, laughter improves memory.

–          Plan B. I’m usually feeling down because something I’m working on is not working out right. So that means…I need a Plan B! Come up with ten ideas. Then throw them out. They were probably no good. You were just getting warmed up. Come up with ten more ideas. This practices your creativity and also shows you that your worst case scenarios are not as bad as you thought. You have all these Plan Bs! Having a backup plan has saved my skin in many many scenarios. For the past 20 years I’ve lived with a Plan B and a Plan C even just in case my current plan did not work out. And my current plan OFTEN did not work out. 2001, 2002, 2004, 2006, 2008, and goddamnit, even 2012, my Plan B has kicked in and saved my life.

Sometimes there’s just nothing you can do. You’re going to have to face it: you will feel down for the next X minutes, hours, days. It’s ok to mourn. It’s part of the process.

The only thing you can do is surrender. Here’s a technique for doing it. Imagine you are at a movie. You are sitting all the way in the back. On the screen is the movie of your life. You’re eating popcorn. Your legs are on the chair in front of you so you have the sensation of kicking back and relaxing.

But all of the above is mythology. It’s what we are programmed/brainwashed into thinking as we get older. By who? By the media, which we know always lies to us. By politicians. By commercials, which almost by definition lie to us. By our friends, who are all programmed by the same commercials/media. Parents, ditto.

So stop it. Question why you needed X, Y, or Z to be happy. “Well,” you can say, “If I lost this money in the stock market every day I might go broke.” Ok, then you will get a job and get a paycheck and things will move on. You won’t disappear. Nobody ever died from losing money. And if your wife leaves you then you can get a better wife, a better life. And so on.

When you are unhappy, take a step back. Watch it on the movie screen. Why did that person (me) need to have X to be happy?

Let your subconscious take over. It knows what to do. You don’t even need to think of it. Imagine your worry like a bubble that you blow that goes up into the air and disappears. Then don’t think about it. Your subconscious is on the case. Either way its like you’re letting The Force do it’s thing to get the best outcome. Trust me, the best outcome will happen. I do this every day. It works.

The worse thing could, in fact, happen to you. You could go broke. Or your girlfriend could be cheating. Or you could have cancer. But what can you do today to move one step forward. Or better yet: take a step back, watch the movie of yourself on the screen, and say to yourself, if I was that person I would do “ABC”.

Then go do it.