I Go Broke When…

The truth is that I always go broke when I stop reading.

Before I started my first business I was obsessed with reading everything I could. Fiction (because I wanted to write novels) and non-fiction (because I loved technology and something called “The Internet” was just starting).

And then I started reading books about business because the Internet and entertainment and my life all seemed to be merging with business.

In between the first and second business I played poker for 365 days. Even the day my daughter was born. I couldn’t help myself.

My accountant finally said the worst thing he can ever say to me. He said, “you should be starting another business”. I wish I had just kept playing poker.

I love everything in that second business. Here’s what happened.

I stopped reading. I separated from my wife. I had no clue what my business did. I fell in love. I started drinking a lot. I went broke. Lost my house. Lost my family. Blah blah.

People fail. Then they come back from it and somehow they turn into Steve Jobs. Steve Jobs is this generation’s mythical “phoenix”.

So now I get to listen to music on my phone and my teenage daughter probably sends nude pictures to boys on her iphone.

When I was playing poker I read every book ever written about poker. I watched every video. I was still reading a lot.

But something got to my head. Something bad when I started my second business.

I was really unhappy in a lot of ways. I can’t even tell you why I was so unhappy. My dad was always going broke so I thought I was finally going beyond where he went. I thought I was superior to him. I thought I didn’t need to do what he did.

This is advice often given writers: write the book YOU would want to read.

But really the advice should be for readers: READ the book you would want to write.

This is what I do.

Here’s advice for movie writers: if you put a gun in the first scene, make sure it’s fired by the end.

That’s like reading. When you read something good (e.g. something YOU would want to write) you’re going to use it in your life to make your life better.

Here are five books that helped me from going broke in the last year:

I didn’t want to read this book at first.

But most of all, he’s the real-life model that Robert Downey Jr. used when he was preparing for the acting role of a lifetime: Iron Man.

That got me jealous.

Not only that, but the book cruised past “Choose Yourself” and my other books on the business best-sellers on Amazon.

I was blown away. It’s a page-turner. When describing how Elon, in 2008-2009-2010, was getting a divorce, dealing with three explosions in a row for SpaceX (one more would have put him out of business), missing deadlines on Tesla, and more, the book reads like a thriller.

Elon Musk made about $250 million on the PayPal sale to Ebay.

But he believed in a mission. And I am always a proponent of “mission before money.”

He put his $250 million (ALL OF IT) behind three companies: Tesla, SpaceX and SolarCity, all of which were destined to change their industries and create new ones.

But at first everyone laughed. Detroit thought he was a joke.

And when everything was going bad, he was literally broke. He was sleeping on friends’ couches. Down from $250 MILLION.

I’ll let Ashlee describe what happens next. Also, I loved the book so much I called Ashlee and he came on my podcast to talk about it (coming soon).

What’s it like to have a strong vision? To execute on that vision to the point of going broke? To manage three completely different businesses at the same time?

These are a few of the things that I learned from this book.

But also, important for entrepreneurs is the notion of “building up.” Everyone wants to start with his/her billion-dollar idea. But that’s not how it happens.

Mark Cuban sold a $10 million software business and then ran a $20 million hedge fund before starting the company that made him a billionaire (he describes it on my podcast).

And Elon sold Zip2, made $22 million (but plowed that money back into what became PayPal and was left with “just” $4 million) then made $250 million and plowed that all back into his next businesses.

Every page is educational and a page-turner, which is what I like best in the books I recommend.

This book is perhaps the most optimistic and the most terrifying book I’ve ever read.

The future is here. Only it’s doubling every year.

Steven Kotler has been on my podcast three times.

When the cameras and electrodes are turned on, a blind man can see. The first bionic eye was turned on: the patient’s first sight? Steven Kotler.

I asked him, “what if the cameras were not just in front of me, but everywhere, and I used my brain to tell my eyes which cameras to look out of.”

“That’s coming,” Kotler said. And the conversation continued from there.

Moonwalking with Einstein by Josh Foer

This is one of those books in specific genre. The writer is a professional journalist researching a story. But then he becomes so absorbed in the story he TURNS INTO the story.

Josh then got obsessed with researching this and then using the memory techniques he learned. He ended up becoming the 2006 US Memory Champion.

He lays out the exact techniques he uses and how you and I can use them. How we can remember what we read in a book. How we can memorize 1000 digits in a row, or a deck of cards, or everyone’s names at a party, etc. As well as the relationship between learning and memory.

For instance, memory brings up some interesting philosophical questions. In an age when we can look everything up in seconds via Google, has memory become less important as an ingredient of intelligence.

The stories he researches (e.g. the actual “Rain Man”) as well as his own journey to becoming the best memory champ in the US make this a page turner as well as a guide to having a better memory.

“Black Box Thinking: Why Most People Never Learn From Their Mistakes – But Some Do” by Matthew Syed

Matthew Syed was a UK table tennis champion and in his book, “Bounce” explored in depth the concepts of talent versus skill and the role of the famous “10,000 hour rule.” That’s the one that says that with 10,000 hours of dedicated practice you will be among the best in the world.

Other “10,000 hour” books include “Outliers” by Malcolm Gladwell and “Mastery” by Robert Greene.

I like these types of books but I get very competitive after I read them. Whether it’s in business, or games, or even relationships (not always a good thing) I want to be the BEST! Second place is no good.

But what Syed covers in his brand new book kind of turns that on its head. He says that often “being the best” simply means avoiding all the bad things that can happen.

His case studies range from airplane crashes (how many could have been preventable with the right attitude towards failure?) to David Beckham (what did Beckham specifically do as a child to become the best soccer player in the world as an adult?).

I want to get Matthew Syed on my podcast. I’m aiming straight at him.

Imagine if you made 15 movies in a row that opened up at #1 in the box office, made a collective $10 billion, give or take, and have won award after award. Now imagine you went through a $7.8 billion merger with the leading company in animation (until your company dominated) and are still making hits.

There are so many questions:

Ed Catmull was president of Pixar for its entire existence and is now head of Disney animation.

In biographies of Steve Jobs there is a lot of discussion surrounding Pixar’s financial difficulties in the ‘90s and even the problems they had with Disney in the early ‘00s.

Ed Catmull could’ve written yet another boring business book about his company.

But instead, he realized that the lifeblood of his company, of ANY company, is creativity.

He describes what it is, how you cultivate it, how you manage creative types, and how you stay at such a consistently high level when every movie ups the bar for the movie that will come after it.

The book is an incredible book—not only about creativity but also about management, leadership, culture, the purpose of failure, and how they are all interconnected; to ignore that is to invite in potential failure.

Investing in your mind is the best investment that you can make.

I invest in my mind every single day…

and now I want to invest in yours. Here’s how. 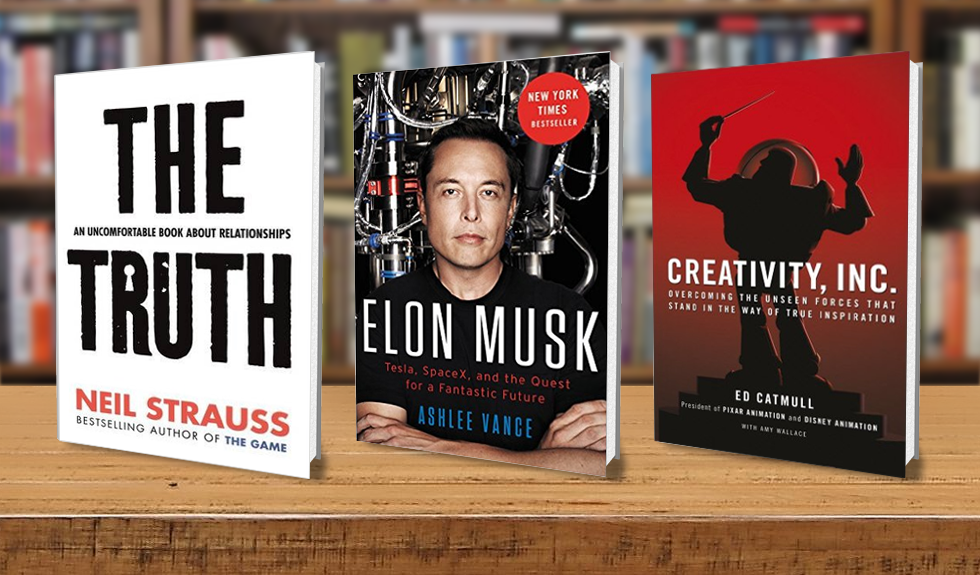