I found an email this morning that cost me about somewhere between two and five million dollars. It was dated April, 2009.   I was one of two that were cc-ed on the email.The guys who wrote the email , like most people who need money, were desperate. I’m an email hoarder and like to extricate what I can from the archaeological dig that gmail provides me.

There were two emails. Here’s the first:

I’m writing to introduce you to the team at Foursquare, Dennis and Naveen.  They’re a really interesting startup based here in NYC. It’s a location-based service for friend finding and venue finding, and is quickly becoming a competitive game amongst tech digerati in major cities around the country. Killer team, incredibly net-native approach, great game dynamics to increase engagement.

We (XYZ Ventures)  definitely want to continue to follow their progress, but given their current stage, we’d love to see these guys pick up some angel invesment in the near-term to see how their current success can scale over the next few months.  So, we thought of you as a good person for them to talk to. If you have any questions, please don’t hesitate to contact me. I’m sure a conversation with the team will be mutually beneficial.

One person on the cc-list wrote back to Dr. Zhivago and me:

So there you have it: Foursquare. That seed round valued the company at about $5 million. A few months later they turned down an offer from Yahoo to buy them for $100 million in cash.  More recently they raised money at about a $300 million valuation. The business is actually doing great. They are making money. Someone will buy them over the next two years for over a billion dollars. Probably Facebook will buy them.

Whatever I would’ve invested at that round would’ve been worth anywhere between one and three million at this point and much more by the time they get bought. So in my mind, I lost three to five million dollars this morning.

This morning I’m a witness to a disaster. I could’ve had that money.  I also could’ve been deeply invested in Google pre-IPO.  So now this goes on the list of things I regret. Someone might say, “it’s only money”. But money is a good thing. It’s a great thing even.  Every day I find new ways where I potentially sacrificed my future.

And I wrote THE seminal post on how to deal with regrets. It’s easy to give advice. Does Eckhart Tolle take his own advice. It’s easy to speak about regrets, but with one sitting here right in my hand, like a baby bird, will I let it go and let it fly? It’s like opening a window in a jail. It’s easy to climb through it. But will I?

All of this sounds sappy. Like I’m trying to make up for something. I can’t betray myself.  I’m never going to be feel GREAT about this email. But so what?

Right behind me I have hanging this picture: 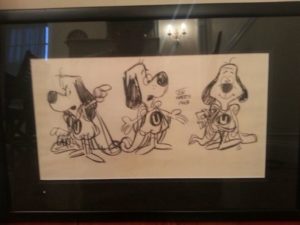 It’s Joe Harris’s initial sketches of “Underdog” before it became a cartoon hit in the 60s. I’m Underdog. And deep down, whether anyone believes it or not, I’m also a superhero.