I Lost My Wallet

Claudia and I were eating in a restaurant this morning when I realized I didn’t have my wallet. This meant I had lost it. I was wearing the same pants as yesterday (and the day before – I roll that way) and I know it had my wallet in it. Which meant it was gone, or I might be dead and already in hell.

We went home and of course we both checked everywhere. Desk, floor, under bed, over bed, couch, kitchen, outside, on the ceiling. Claudia checked in car. She checked in her purse for some reason (note to self: does she take my wallet sometimes?). Checked in my jacket I had worn on TV the night before although I knew it wasn’t there.

I felt an urge to blame Claudia. I had never even used a wallet in my life until she had given me one for my birthday. Every girlfriend since I was 18 had bought me a wallet and I always ended up insulting them by never using it. Why? Because I can always lose a credit card or a dollar bill. But if I lose a wallet I lose EVERYTHING. Why take the chance?

But for Claudia I was going to do it. I was going to take the plunge into wallet-dom like every red-blooded American male on the planet. So I could be “organized”. I was going to make it work for me. I started using the wallet every day. And now that I had lost it, of course, it was COMPLETELY HER FAULT. My brain was starting to short circuit. THIS IS WHY I NEVER USE WALLETS. FUCK!

And she was blaming me. How could he lose his wallet? What kind of person is this? If he loses a wallet maybe he can lose me? Leave me behind some place. The wallet’s the molten center of the Earth. Ready to erupt and destroy everything. Or hold it all together. Wallet? Love? Or Love? Wallet?

I got lucky in two ways. One is: my ID and all my credit cards were loose in my pockets. So nothing important was in the wallet (Phew!).

What was in the wallet? 100 $2 bills. Some random other subway cards. An expired credit card. So I didn’t even care anymore.

Claudia said, “call the movie theater”. Because we had gone to the movies before I had gone on CNBC the night before. Don’t tell CNBC! I had told them I had taken a nap and that’s why I was late returning all of their calls yesterday. We saw “The Hangover II”. I highly recommend it. I laughed the entire time. 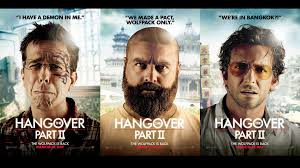 I called the theater and they said, “oh yeah, we have it. Wait, what’s in it?” And I said, “100 two dollar bills.” And the woman laughed and I think for a brief second I fell for her because Claudia might’ve still been mad at me for losing the wallet but now this faceless, nameless woman who maybe was even missing a nose but had a good laugh found it. “Yeah, we have it. It had no ID in it but all of these $2 bills.”

I asked Claudia, “why do you think nobody stole it? It had at least one credit card and all of these $2 bills. Some guy cleaning the theater could’ve stolen it.”

She said, “because you don’t steal. So nobody is going to steal from you.”  (Well, except for here)

It sounds like a cliché. It sounds corny. But everything comes from the inside. You lose all the money in your bank account. It’s because you didn’t work on building your core from the inside out. You lose your job, maybe you gossiped too much. Lost your mind, maybe you think too much. You lose your 5 year relationship, it’s because from the core, inside of you, some energy started to leak and you didn’t patch it up. It’s your fault.

After 100 personal anecdotes (a 1000!) I finally believe this. After losing everything repeatedly and starting from the core inwards with The Daily Practice I believe this. Interesting also to me is that in the three or four days prior to losing my wallet I wasn’t getting enough sleep, exercise, etc because of traveling and speaking engagements, etc so I was off my own personal Practice

Bad things happened. I lost my wallet. Then I found it.

We’re going in five minutes to the theater to get it. X-Men: First Class is playing. We’re going to see it. And I’m going to get my wallet back.

And at least, for today, I know there’s no way I’m going to lose it.

Update: Got back from the movie. Got my wallet: 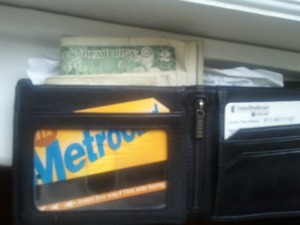