I'm Wrong Almost All the Time

The entire kitchen floor of a well known five star restaurant in NYC was covered by swarming rats. More on that in a second.

Every five years all the science textbooks in school have to be thrown out. Science is constantly wrong or has to be updated.

In 1970 everyone thought we were going through global cooling. That changed.

In 1980 many thought a personal computer would be useless.

When is science right? Is it more or less right than religion?

Everyone thought the economy would disappear in 2009.

Everyone thought the Gulf of Mexico would be ruined. Or nuclear waste from Japan would hit San Francisco or if that you went to college you would be guaranteed a job or if you get a home then you “own” something.

Most people when they get married think it will last forever.

Most people think their children can do no wrong.

Many people think they own their homes despite monthly payments to the bank and the government or else their house will be taken from them.

Many people think their representatives in government fight for them.

Family thinks you should show up at every wedding and every family occasion.

Everyone is wrong almost all of the time and it makes zero sense to argue with them. They are happy being wrong . It fulfills needs they have.

Have you ever changed anyone’s mind in an argument?

When I met Claudia I was sure I would never go out with a girl who spoke English as a Second Language.

After the first date i was talking to a friend of mine. I told him Spanish was Claudia’s first language. He said, “I guess that one is over.”

Now I’m married to Claudia. I like her accent. 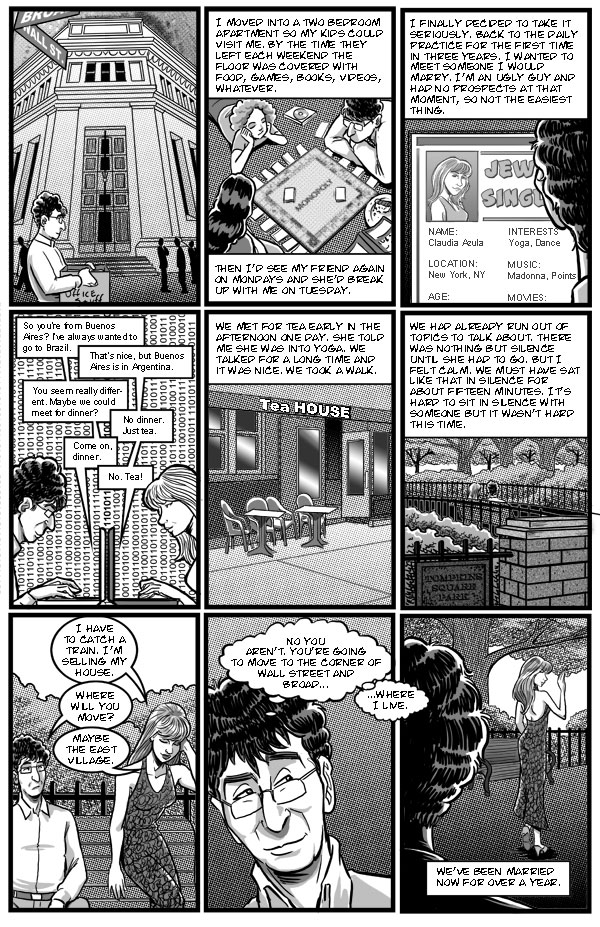 I am wrong almost all of the time. I can either have a strong opinion (argue fight petitions anger). Or I can spend my time enjoying things. I am FREE to make that choice.

One time I was walking past B****, the five star restaurant mentioned above. It was about two in the morning and I couldn’t sleep because I thought my life was over. The kitchen door was open in the back of the restaurant.

The chef is famous, the restaurant is famous – a meal there would be a few hundred dollars.

So of course I walked into the kitchen for no reason other than the door was open and I was sure the place was empty. The entire kitchen floor, stretching about 100 feet, was covered in rats swarming over each other.

I can’t fight the rats. I can’t make every restaurant clean up. I can’t make NYC change the rules. I can’t enforce rules even if NYC changed them. I can’t argue with people about rules. And there are more rats in Manhattan than people.

So I don’t fight stupid rules. That has zero use.

I move. It’s not that hard.

I moved 70 miles north, in a town surrounded by national parks, right next to a river, and I barely go into the city now except to meet with people that I like to be around. I was dead broke at the time.

But because I had less access to less meetings, took advantage of fewer opportunities, said “no” to more things, I made more money than ever.

I can’t argue about politics with people. Most people are wrong: no matter what government there is we still have crime, wars, corruption, lack of real representation, an FDA that prevents people from getting cures, people getting fired, an IRS that takes most of the money you earn and gives it to the companies with the biggest lobbyists. An NSA that reads all of our emails and there is nothing we can do.

Voting doesn’t stop it. Protests don’t do anything. Petitions are just lists of people on future firing squads. Promises are future disappointments.

One friend of mine told me in 2008 she had “an orgasm” when Obama was elected. Now she hates him. Why would you hate him, I asked her. Did he do something bad to you?

“I thought things would change,” she said. “What did you expect would change that would make you personally happier?” I asked and she had no idea.

She’s unhappily married and frustrated with her career. Her husband cheats on her. Her artistic career never got off the ground. Maybe she thought life would get better.

My parents wanted me to get good grades, go to graduate school, get a good job, get married, own a home, rise up at my job, have kids, live near them.

They tried to dictate my entire life before I was even born. They weren’t happy. But maybe they could FORCE my life in some way.

Should we let these people tell us what should we do with our lives? Are they right about us but wrong about themselves?

I don’t want to waste my time getting angry. Or arguing with people. Or trying to convince people they are wrong about their plans for me.

Does this mean I am giving up? Not at all. It’s a big world. When one door shuts, ten more doors open.

When one person hates me because I won’t do what they think is “right”, I have another 7 billion people I could choose from to pick my friends lovers mentors inspirers.

It’s hard for me not to instinctively follow what has been imposed on me by: institutions, parents, colleagues, schools, false anger and dreams, etc.

But each of us is unique and we have our own path, regardless of the paths of others. You have to find your uniqueness.

I want to do what makes me feel at peace.