Imagine You are Ten Years Old

Imagine you are a nine year old girl. Imagine how excited you are because tomorrow you are going to turn ten. Think back to how you were feeling then. What would it be like to be two digits old instead of one?

Imagine your parents are divorced. You remember them arguing all the time. You remember when you were six, asking them at your older sister’s scared prompting, if they were going to get divorced. You tiptoe into the kitchen where they are arguing, where they ignore you because of their yelling even though they know you are there. They are screaming. They are twice as large as you. You want to ask them a question. Imagine saying, “excuse me”.

Imagine saying, “Josie wants to know if you two are staying together.” And they come over to you and hug you and you don’t know if that’s an answer or not. You don’t know what you will say to your older sister who is upstairs waiting for you. You don’t know whether or not to be scared.

You remember your father getting so angry the police had to come. You remember them walking him out to their car in the middle of the night. You remember being scared. Then the next morning, the sun just barely up, you, your mother and your sister going out into the middle of nowhere and picking him up at a motel. You remember him getting into the car and not saying anything. Imagine the red and orange blurs of the sun rise, obliterating the night that just happened. Nobody says anything. Nobody ever brought it up ever again.

Imagine your father not coming home one day. “He’s working busy in the city again,” you think, even when he doesn’t show up for Thanksgiving. Even when nobody says anything to you.

Imagine every two weeks driving seventy miles into New York with your mother so you can be dropped off with your father. Imagine your father taking you and your sister to ping pong, pool, bowling, museums, rock climbing, going ice skating, going to magic shows, eating out three times a day, playing games, eating more, and finally you are exhausted and are driven home late Sunday night before school the next day. You are sad because you are so exhausted.  There was no break. You are too exhausted. You are sad because why isn’t your father driving home with you?

Imagine your father and mother finally telling you they are getting divorced a few months later. You cry because you don’t want to be “one of them”.  You think of the other kids in school whose parents are divorced. Now you are in that club. You don’t want to be. You cry.

Imagine a year later, your father moving back into the town you live. You are so happy. Maybe, you think, you will all be one big happy family again. You remember when everyone is together and he is always making jokes. But you remember the fighting. You remember him throwing things. You remember the police coming. You were scared. But now he’s back in town. You have a bedroom in his house. You imagine what it’s going to look like. You’re excited about the spiral staircase he tells you is in his house.

He drives you and your older sister to his new house for the first time. On the way there he pulls over. He says to you there is also a woman at the house and that he’s in love with the woman and he’s going to marry her. You start to cry. “What!?” you remember saying. You try to picture what she looks like.

But then he says, “She has met you girls before and she will love you girls very much.” And you say, “Wait? Who is she?”

And you remember that your daddy let her watch you a few times when you were in the city and he had to go off to a meeting. And you remember liking her and that maybe this won’t be so bad. But you also, deep down, miss the idea that it won’t be one big happy family like it once was.

Imagine you’re about to turn ten the next day and in fifteen minutes you have to go to school. You and your mother park by the river to watch it flow by. You have a few spare minutes each day before school after your older sister is dropped off. Your mother and you take a walk by the river. 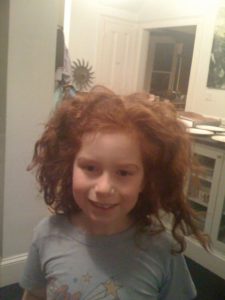 Imagine then your father jogging up to the car. He lives right next to the river. He’s got a bag. His new wife is with him. She’s carrying a bag. The bags have all your birthday presents in them. It’s everything you wanted. They both hug you. You’re smiling. You’re happy to see both of them. You want to open up all the bags and boxes and presents. Before they got there you were reading a book that was a fictionalized version of the young Anastasia. But now all you can think about are your new presents.

Your father and his wife kiss you. You are smiling from end to end. “It’s not my birthday yet”, you say. But tomorrow you will be double-digits. Your father says, “Next year we will turn back the clock and you will be nine again. No more of this double-digit stuff.”

You look at your mom and you look at Claudia. Daddy is being crazy again. You smile. Your step-mom takes out the doll she got. “Isn’t she pretty?” You say, “yes.” You are very happy. Sometimes things don’t work out just right. But sometimes you can be happy anyway. There’s a doll. There’s pencils. There are accessories. There’s going to be a sleepover, and a brunch, and then your daddy is going to take you out for dinner. It’s a weekend of celebration for your birthday

Imagine you are back in the car. Your daddy and step-mom are running in the cold back to their house where you now have a room you share with your sister. They’ve left the presents behind that you can look at in the fifteen minutes before school begins. You are smiling from cheek to cheek, freckles spread across your face like meaning on a tarot card. You think of the weekend ahead

Tomorrow you will go from nine years old to ten years old. And for the rest of your life you will be double-digits. Will you see the other side of that? Will you see three digits? You look at your new doll. Nothing will ever go wrong in the world again.

Imagine you are going to be ten years old tomorrow. Double digits for the first time. You already miss the single digits. You won’t be a baby again. With no worries. You can’t imagine what double digits will be like. Imagine that you are my daughter and it seems like nothing will be the same ever again.