The Introvert’s Guide to Hitchhiking for Love and Fortune 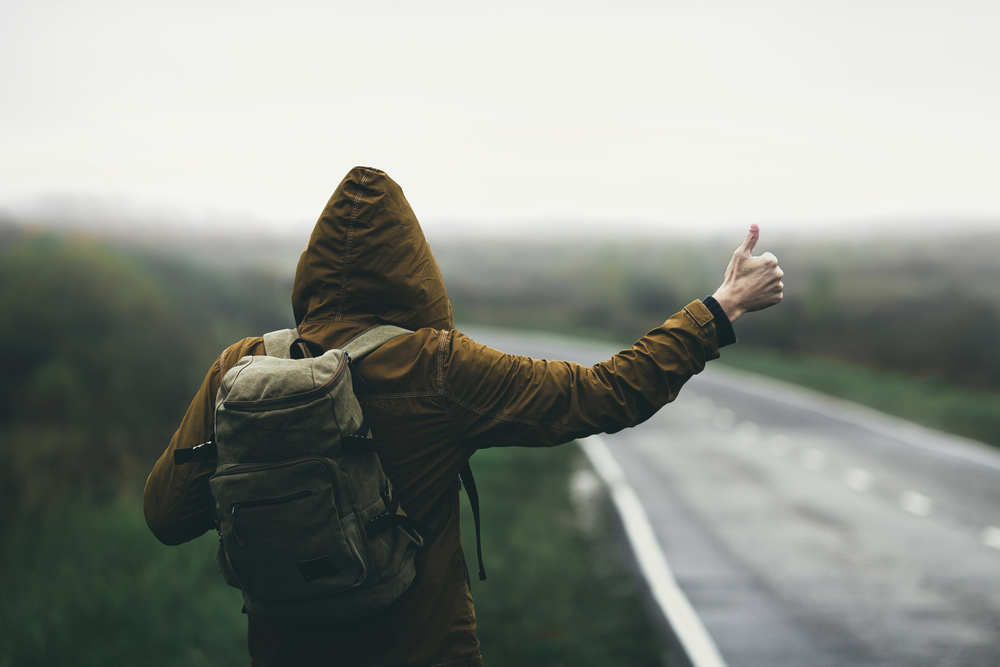 The first time, I was chased.

I had my thumb out. I was slouched over a little bit to look as unthreatening as possible (not difficult for me). It was night and it was raining a bit and I wanted to get home.

A car pulled over. I only needed to go a few miles.

A bunch of kids jumped out of the car and, laughing, started running at me.

I ran as fast as I could and they continued to chase me. I ran maybe 300 feet and I kept hearing them yell stuff but I couldn’t hear what.

Another car pulled over and the guy said, “Get in.”

I got to my destination and I was shaking. But I wanted to try again.

I had a job I hated and it was outside of the city.

Since I hated the job I knew I was going to quit so I didn’t bother buying a car. I couldn’t afford one anyway.

I snuck out of work every day at 4:45 p.m. while the sun was still out. I walked over to the highway. I would stick my thumb out.

Within a half hour I’d always get picked up. I was always scared.

I would say, “I just got fired,” so people would assume I was depressed and had no money on me.

But for a moment, I’d feel free. No past, no future, just there, in the car. A destination hurtling towards me.

First pickup:“I’ve seen you out here before so I figured you were safe. I’m married but I don’t know. Maybe I was too young.”

Second pickup: “I cheated on my wife with her sister. Then my wife found out. I’m really scared she’s going to end it with me. I love her so much. We decided to go to church together. I really messed up.”

Third pickup (wife was in the car):

“Honey, this is the guy I was telling you about!”

She didn’t look at me at all.

“We’ve been going to church every week. You should go to church with us this Sunday. It’s really set me straight. I was being tempted by Satan for a reason. Things are going great now.”

His wife said nothing. Stared straight ahead.

That’s the last time I ever saw him.

“Are you going to murder me?

She had dark red hair. Bright red lipstick. Quirky. Why would she ask if I was going to murder her? If that was my plan I wouldn’t say yes.

I liked the idea that I was a mystery. We spoke for the entire ride back into the city.

The next day I called her at her work and asked her out.

I said, “Can you imagine the story we will tell our grandkids of how we met?” I said this. I said “will.” She laughed.

I fell in love with her.

The next day I called her around 8 p.m. No answer. Just went to voicemail. I called again at 9 p.m. Then at 10 p.m. Then every half hour. Around midnight she picked up and said, “Have you been calling all this time?”

She had figured out my secret identity.

I never spoke to her again.

Just getting from one part of town to another. I got really good at it.

One time when I was still in high school I was picked up by one of the trustees of the college I ended up going to. She wrote me a recommendation just based on the conversation we had in the car.

Another time I got picked up by the guy who invented the smiley face. 🙂

You didn’t know someone invented that? Google it. In the 1980s, a message group was trying to figure out how to represent a smile via text without writing it out. The guy who picked me up suggested the colon and right parenthesis.

You have to learn how to look unthreatening (again… easy for me).

Then you have to have good conversation so they don’t regret picking you up. This is critical. Else they say, “Well, I have to pull over here. Good luck.”

You have to be a clean slate. A reflecting pool of water. No matter what they say, you have to improv (“Yes, and…”) and run with what they are saying. Agree and add to their beliefs. No matter how insane they are. And they are ALWAYS insane.

Then you have to shut their door quietly. I had been a slammer until then. People get upset and it ruins the illusion.

I’d race my friends. We’d all agree on a location. Then I’d bet them dinner I could get there faster via hitchhiking. Sometimes I’d win and sometimes I’d lose.

I wanted my life to change every time a car pulled over. I felt fear each time. But I was safe.

I met people. And I became a tiny bit more fearless.

I was “the hitchhiker.” I hitchhiked over 100 times.

Sometimes I still try to do it. But I never get picked up anymore. The world is different.

But it’s the same skill as when you walk into a room and need to make a sale. Or you go on a date for the first time. Or you go for a job interview. Or you meet someone at a party.

Yesterday I dropped off one of my kids for her first day of a summer program in a different country.

I was scared for her as she unpacked in her empty room. Will she make friends? Will she be nervous and shy?

And I was jealous. I want to experience that moment again. That fear. That newness. I could be anyone.

I still want to be a hitchhiker. A blank mirror. Wanting to be liked. A man in a costume.