It's OK If You Don't 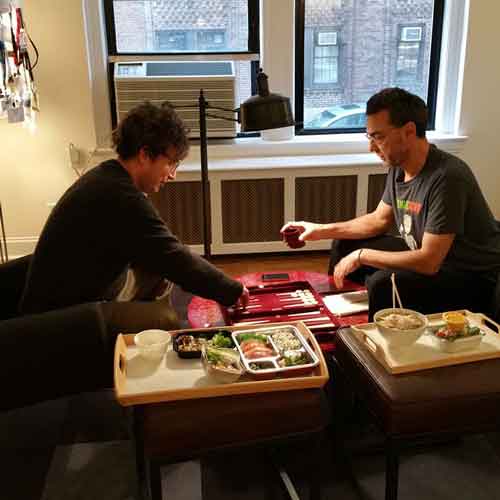 I feel inadequate. And there’s not much I can do about it. Or even want to do about it. I actually like the feeling.

I had a lunch today with a guy who worked in the mailroom at Hannah-Barbera which made all my cartoon favorites from the 70s: The Flintstones, Scooby-Doo, The Jetsons, and so on.

He used to pitch ideas every day to Joe Barbera. “I was working in the mailroom but I kept coming up with ideas for cartoons. I would send them up to Joe Barbera and I had no idea if he would like them or not. Then eventually he pulled me over and I started helping on all the scripts.”

I mentioned some of my favorite cartoons from the 70s. “You know that one with Scooby Doo and the Harlem Globetrotters?” I said. “I wrote all of those,” he said.

“What about Space Ghost?”

“What about the Jetsons?” “Wrote it.”

And so on. Impressive guy. He killed himself at one thing for 30 years and wrote all these classics I grew up on.

I’ve met or interviewed so many people in the last year. In the last five years. In the last 25 years. People who have amazed me. I try to learn from them and sometimes I can learn a little bit.

When I meet someone I try to learn one thing that I will never forget. It adds up.

Like how someone got inspired by a pencil to build a hundred schools in third world countries (Adam Braun) or about someone who wrote lyrics every day while 97% of his friends were killed by the time his childhood was over and then he made the bestselling song of 1995 (Coolio).

Or the Congressman obsessed with meditation Or the other congressman who is now running for President. Or the 72 year old who runs the largest beer company in the country.

Or people who work 90 hours a week chasing their dreams.

You know what my basic story is? Fear.

I was desperately afraid I couldn’t feed my family. I made a lot of money. I thought I would never have to worry forever. Then I fell in love with someone. Then I lost it all. Made it back. Lost. Made. Lost. Made.

What a roller coaster! I wasn’t making dreams. I just wanted to feed my family.

I think I came up with a strategy to keep me balanced. To allow me to grow and flourish instead of just worry. But really, past that, I don’t care.

I’m happy I feed my family now after such a roller coaster. I don’t want to own a basketball team. Or end aging. Or go to the moon.

At some point I gave myself permission:

– I try hard at everything I love. When I love something I want to obsess on every part of it. This has caused me problems in relationships when I obsess.

– It’s ok to be in hard situations that you can’t solve.

This is why I have to remind myself every day to focus on health. Be around good people. Be creative. Be grateful. Once a day I save my life by reminding myself of that.

– That’s ok that I have to remind myself of that or lose everything. Again.

– It’s ok to be “stuck” sometimes. To know that you have talents but to have no idea how or when or why to apply them. Being stuck is a huge signal it’s to time to change. That’s not a bad thing. It’s a good thing.

– it’s ok to take time ordering. – It’s ok to not have opinions.

– There’s lots of intelligence tests out there. Like: Google asks these questions at interviews. How marbles would fit in all of outerspace? I look at those questions. I can’t answer any of them. That’s ok too.

– Sometimes I forget to return an email. I really liked a person and they sent an email and then I forget to reply. I look back months later and see I made a draft but never hit send. Sometimes that’s ok. But sometimes it prevents me from being friends with people I like.

I like beating my 13 year old daughter at tennis! But guess what? We played for the first time in months this past weekend and she was hitting stronger and faster.

Pretty soon she will beat me. I guess that’s ok also. Children should get better than their parents.

A friend of mine is a super-genius. He stopped by yesterday to show me his latest invention. He came up with a new molecule to put into a “vaping” device (an electronic device that lets you smoke without the actual smoke.)

He made a special concoction so instead of smoking nicotine he’s the first person to ever smoke vitamins. We loaded it up with vitamin B12 and each took about 10,000 times the recommended daily allowance.

He took his blood before and after. Sure enough, 10,000 times more b12 was in his blood than before.

We vaped Vitamin B12 for about an hour and then I went to my cartoonist lunch and then over to do a podcast with Stephen Dubner who wrote Freakonomics.

I was thinking to myself, “I’m the second person in history to smoke Vitamin B12. I’m like the Buzz Aldrin of that vitamin.

Dubner and I were talking about what the saddest truth in life was. He said, as if it were obvious, “you mean other than dying?”.

I said dying to me sounded like the happiest truth about living. That being born was a pretty sad truth.

Once your born you have to excrete food for the rest of your life. That’s like God’s punishment for eating that apple. Once we were eating apples we had to shit them out.

I said I wouldn’t mind if I died tomorrow. I’m not depressed or anything. But life has been pretty good to me so I don’t really sweat dying.

It’s ok if I want to die occasionally without being depressed. Who cares? We all have to die sometime.

Dubner and I did six straight podcasts in a row. We’re probably going to release the podcasts in a month or so. I had a lot of fun. Not because of the podcasts but because we’ve been friends for 15 years almost. I’m vaguely ahead in a backgammon match that we started in 2003.

What are you up to next? he said when we were leaving the studio.

And that’s exactly what I did.

A day in the life.