The Top 5 Books To Read This Summer

I tried to read on a beach once. I got the very first Kindle. It didn’t have many books available but what it did, I downloaded and tried to read.

But it was uncomfortable and hot and my wife and kids kept going into the ocean so I went back to the hotel room to read. A year later I was divorced.

It’s let me re-live the lives of all of the authors, curated by them into a compact form so I can re-live that life in days instead of decades.

Reading has also taught me to be a better writer. When I read the best writers I study how they curve and carve and paint a sentence so it leaves the right piece of art on my brain. How did they do that? What miracle did they perform.

I picked out these books, plus the 30 in my contest (which you can enter to win in less than 10 seconds here), because those books did all of the above. But mostly, I loved them.

When To Rob a Bank by Freakonomics 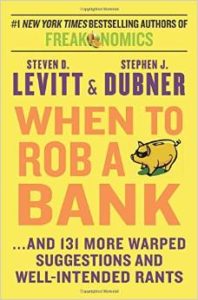 This book is a collection of blog posts that Stephen Dubner and Steven Levitt wrote over the past ten years. Many people say, “blog posts? Why pay?”

Over the past 10 years Dubner and Levitt wrote 8000 blog posts. So this is their heavily curated BEST posts of the past ten years. They bring up tons of fascinating topics and I like the “freakonomics” way they look at things.

Let’s face it. Economics is not a science. It’s not a hard science (chemistry, physics, and biology) and it’s not a social science (sociology, psychology, anthropology). It’s really a “nothing”. Here’s the one thing we always know: economists are usually wrong about the economy. And no economist has ever truly solved an economics problem. Given any situation you can find Nobel Prize winning economists on both sides of the situation.

But Freakonomics is a way to put a little color into that. When IS the best time to rob a bank, statistically, for instance? Why don’t flight attendants get tipped? How should terrorists do their next attack?

They don’t always have the answers and they admit it. What I like is that they ask the questions.

Dubner and Levitt’s curiosity is infectious and it shows through this book. Reading the book won’t get you all the answers, but it will fill your mind with questions and those questions may lead to your own answers.

An Astronaut’s Guide To Life on Earth by Chris Hadfield 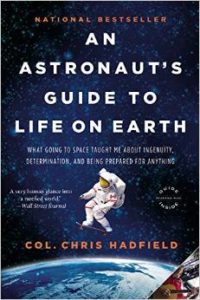 I’ve been really fortunate to not only read this book, but then to immediately call up Chris and ask him questions about it.

I’ve been reading books by and about astronauts since I was a little kid. I feel like many kids wanted to be an astronaut. Many kids still do.

There’s something very human about the desire to go beyond anything humans have ever done before.

But it’s not easy. Every step of the way for 30 years, there were obstacles in Chris Hadfield’s way. What was interesting to me in the book was not how pretty the Earth looks from space but how Chris dealt with all his obstacles.

As he told me, “life is not a straight sequence. There’s a boulder in that sequence and you constantly have to figure out ways around that boulder.”

This book it not just a memoir but a methodology for getting around that boulder whenever you are confronted with it. So many times Chris could’ve given up. But the ingredients for success are in this book.

I also recommend searching on YouTube for Chris’s video where he sings “Space Oddity’ while in the space station.

There’s a chapter: “The power of negative thinking”. And it’s a little tongue in cheek. It’s not that he “negative talks” himself like so many people do – like I have on so many occasions.

He never says, “oh man, I’m never going to achieve my goals” or “shoot, if I go up in space in this thing it will probably blow up”.

But what he does do CONSTANTLY during his training for over 21 years is to be humble enough to assume that the worst-case scenarios are always possible. He is constantly anticipating every bad thing that can happen and come up with the alternatives or solutions he will use to overcome those obstacles.

He says, “For me, this has greatly reduced the mental and emotional clutter that unchecked worrying produces, those random thoughts that hijack your brain at three o’clock in the morning. While I very much hoped not to die in space, I didn’t live in fear of it, largely because I’d been made to think through the practicalities….”

The quote doesn’t end there. I have basically highlighted almost half the book. I don’t want to be an astronaut anymore. But I do want to be the sort of person who is competent in anything I set my mind to. This book teaches how to do that. 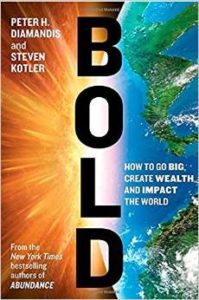 In 2000 I read “The Tipping Point” by Malcolm Gladwell like everyone else did and put it nice and neat on my bookshelf so anyone walking into my office could see it.

I didn’t understand it.

I kept asking myself: ok, he shows all of these ‘tipping points’ when a business suddenly breaks out and everyone is buying their products. But he doesn’t show us how a technique to get to a tipping point. He doesn’t show how to predict a tipping point, or any way at all to benefit from one. He did this all in “Blink” also. I just didn’t get it.

But finally in “Bold” I got it.

They basically tell you how to determine what industries are going to hit a tipping point and almost exactly the day it will happen. I don’t know if that was there intent but when they came on my podcast we discussed it.

They talk about industries that have exponential growth that can almost be explained by a formula. Like the famous “Moore’s Law” named after the former CEO of Intel in 1965 when he said that (more or less) that computing power would double every year.

This is sort of like the story of the history of chess.

A man in India taught the king a game he invented: chess.

The king was so happy he said, “Ask for anything you want and I will give it to you!”

The man pointed to the chessboard and said, “I just want a piece of wheat on the first square, two pieces of wheat on the second square, four on the third, and double on each square until square 64. ”

The king thought the man was a fool. He put a single stalk of wheat on the first square. And then kept doubling.

By the time he was about halfway through the board, he had to put his entire kingdom on the square.

So what did he do? He killed the man. Back then there were simple solutions to hard problems.

The authors of Bold define the “6 Ds” that help you if an industry is about to turn exponential (in other words, they are about to go from the tiny tiny sizes to exponentially large sizes) and they discuss which specific industries are on their radar. They talk about 3D Printing, Robotics, Sensors, and so on. Fascinating book. 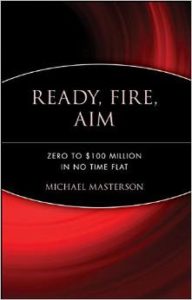 When I do a new project I like to study everything in the space. My newsletter was a new project for me. I had never done one before. I had been sending out emails and posts and even books for free for years. I felt bad about charging. I didn’t realize it would mean I would be able to add more value and have more people help me deliver a vision I strongly believe in.

Michael Masterson has run many successful newsletters and other businesses. I recommend this book and also his book, “The Pledge” which dives more into his philosophy of living.

These two books have been like guidebooks for me while I’ve been on the intense journey of launching this newsletter business.

If you’re in business for yourself or want to be, Ready. Fire. Aim is the book I would read.

The Martian by Andy Weir 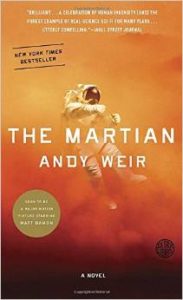 This is a fiction book but I’m putting it in the category of non-fiction.

First off, some homework. Check out my podcast with the author Andy Weir. Originally he self-published this, it became a bestseller, and magic happened: a publisher picked it up and Ridley Scott made the movie.

Second, watch the movie trailer. It’s coming out this year.

It blew me away how good this is going to be.

Why did I put this in non-fiction. I’ll tell you the premise of the book. It takes place in the near future, the first ship has gone to Mars.

At some point, a storm occurs and the astronauts evacuate. One astronaut was left behind and he has to survive for four years.

How he survives is a perfect example of someone who has an idea machine on overdrive. What he does to grow plants, to travel, to communicate, is amazing and teaches the lesson that creativity of the brain is essential for crisis situations.

We may not always find ourselves stranded on Mars. But sometimes it certainly feels that way.

Sometimes I feel like the character in “The Martian”. Stranded and left behind on a strange world where I have to learn to survive.

Fortunately these books help connect me back. And when I land back on Earth I have new stories to share. Stories I gained without even leaving my couch.