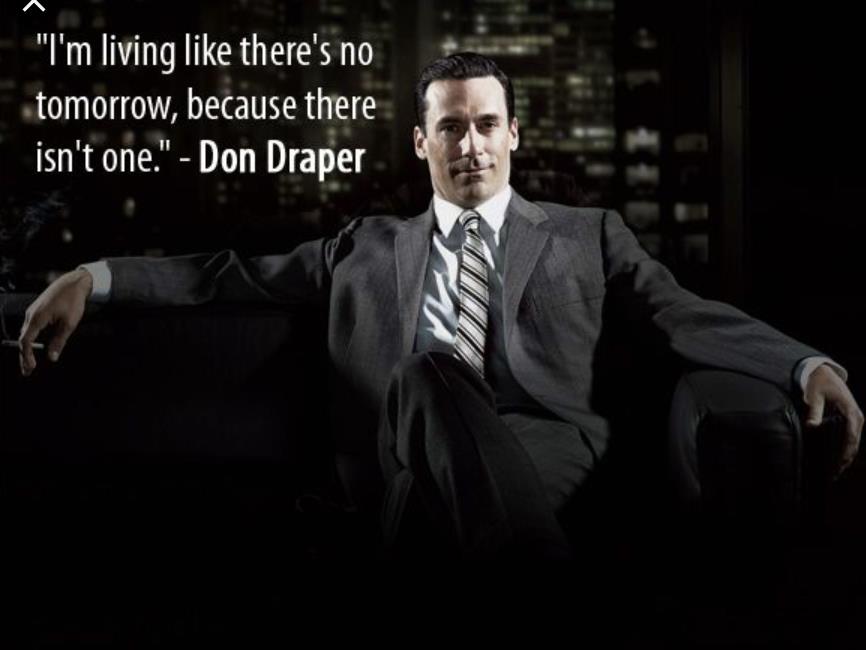 “You’re mine!” I said. But I was lying. I hated him. I hated every client.

I was afraid the client would fire me if I wasn’t his friend. I made every decision out of fear.

I wish I hadn’t cared what people thought.

Getting respect is more important than being liked.

Don Draper is a mystery.

The main character of the show “Mad Men” has a fake identity. Maybe that’s why he doesn’t care what people think.

Because nobody knows who he really is. He hides in plain sight.

Like how on Halloween we lose our inhibitions because we are in a mask.

Throughout the series he builds a philosophy of authenticity. People can see authentic. They can smell it.

They don’t always know they are doing that. But inauthentic people reek.

I recently rewatched the “Mad Men” series. I kept notes.

Don Draper’s philosophy on business, on advertising, on everything, is ultimately a philosophy of authenticity.

In the last season is my favorite Don Draper quote: “You have to learn to live in the ‘not knowing.'”

“IF YOU DON’T LIKE WHAT’S BEING SAID, CHANGE THE CONVERSATION.”

It’s so easy to kiss ass and just say yes when deep down you know something is wrong.

It’s so easy to not stand up for what you believe in. It’s hard work to have beliefs you are willing to say no for.

If you don’t believe in your vision, you are too easily swayed.

It’s interesting to note that, in season 6, there was a critical moment when Don overhears Peggy using the same phrase and he realizes then that the student has become the master.

Don says this to Peggy when he thinks she is complaining again.

She thinks she is owed a new office. Or better clients. Or a higher salary. She compares herself to others who she thinks have more.

No successful person ever says, “That strategy of complaining all the time really worked for me.”

I feel this bitterness. I have to keep it in check.

“Why are they getting what I think I deserve?”

When I recognize it in myself I call it “the disease.” I get the disease constantly.

The way to succeed is to get out of the hierarchy. This is the fastest way to move forward. To skip the line.

Building your own voice gives you permission to speak.

“SUCCESS COMES FROM STANDING OUT. NOT FITTING IN.”

Of course, this is a riff on a Dr. Seuss quote from “The Cat in the Hat”:

“Why fit in when you were born to stand out?”

In 2009, I started writing about my personal failures. I created my own category.

It wasn’t finance. It wasn’t self-help. It was confessional, but I also described the ways I would try to fight my way out of failure.

It wasn’t literary but I would try to use the structure of the sentences to express the despair I was in. People on the verge of suicide write simple sentences.

DESTROY the category you want to succeed in. Burn the bridges down after you cross. Don’t be like THEM. Go to the place least crowded.

Jeff Bezos didn’t create an online bookstore. He created the only infrastructure for all ecommerce and then for all large-scale online platforms.

“THE MINUTE YOU SIGN THE CLIENT IS THE DAY YOU START TO LOSE THEM.”

I ran an agency in the ’90s. This statement is true true true.

I signed a record label. Everyone was happy.

Then one person asked for a bribe. Then another person would call me at 4 in the morning every day crying with his personal troubles.

Then the CEO would complain about our work. Then the accounts department was late with their payments.

Then more complaints. Then more crying. Then I was sick of it. Then we lost the client.

To put that moment off, you have to be intimately intertwined with their lives above and beyond work. You have to care for them as people first, then company second.

And you have to really care.

For years I faked it. I would go to therapy feeling like I didn’t know who I was.

Don Draper had the advantage that he had a fake identity. He was used to not knowing who he was.

And you can’t fake it. The client is an X-ray machine.

The same holds if you are a public speaker or a writer. Let the X-ray machine see the real you.

“I DON’T BELIEVE IN FATE. I CREATE MY OWN OPPORTUNITIES.”

Most seeds will fail.

I am right now trying to produce a TV show. I’m working on a book. I invest in speculative opportunities.

I am trying to learn standup comedy. I am trying various experiments that many would (will/do) think are outrageous but I like to try experiments in my life. (Check out your taxi TV if you are in a NYC cab.)

Nobody will ever give success to you.

The goal is to try quickly, fail fast, hit the accelerator huge on the things that start to work and give you joy.

You can’t get a book published? Self-publish.

You can’t get into a college? Take MIT’s four-year online schedule, pass all the tests, and write about it.

You can’t make a movie? Create a podcast or a YouTube channel.

You have no social media platform to sell an online course? Create a good course and split 50-50 the revenues with someone who does have an online platform.

I think of the person who told me she maybe was “a little” bit of an elitist. Or the other person who kept telling me she was “crazy.”

I think of the employee with the fake British accent. Or the client who was mugged twice in the first week I had met him.

The exact seed they planted that first week bloomed into a forest by the time it ended.

And I’m no better. I will tell you who I am. But I’m tired of faking it.

“MAKE IT SIMPLE AND SIGNIFICANT.”

In comedy there’s a saying that if you have to explain the joke, it’s no longer funny.

In entrepreneurship, you have to be able to explain your business in the time it takes to ride an elevator.

Not a wasted word. This has been a main point to my literary thinking all my life – Hunter S. Thompson

“CHANGE IS NEITHER GOOD OR BAD. IT SIMPLY IS.”

When I was so broke I lost my house and was forced to move, I cried.

When my wife left me and I never saw her again, I cried.

When I was fired from a writing gig I had for eight years, I cried.

We’re all in a war against change.

Personal energy is the weapon against personal change.

If you are sick in bed, change is more difficult.

If you are arguing with spouses or friends or partners every day, change is more difficult.

If you have stopped being creative every day, change will be frightening because you won’t know what your options are.

And if you try to control the things you can’t, then change will be a nightmare.

Don’t let any of these bodies lose energy.

“YOU ARE THE PRODUCT. YOU FEELING SOMETHING. THAT’S WHAT SELLS.”

When I ran an agency, people bought from me not because I was the best but because I believed so strongly that every company would need a website or would go broke.

And I told them why. I sincerely wanted them to be better by buying the vision I had for them.

Sometimes. Sometimes I just wanted money. So I faked vision. And lost myself.

I love doing my podcast not because I want it to be “famous” or “lucrative” but because I sincerely want to learn from my guests.

Else it will fail.

Don Draper wasn’t Don Draper. It was a fake identity. He had to start from scratch.

I don’t like the phrase, “You have to build your personal brand.”

A brand dresses itself up in bullshit covered by perfume.

Don Draper knew this. He didn’t sell a fake story. He sold people a vision. A vision of the world that he wanted to live in. And they bought it.

Only one person can control the frame in the room. You want to be that person.

Don Draper always succeeded in that. He didn’t care about his “personal brand.”

I don’t want to be a personal brand. I’m a person.