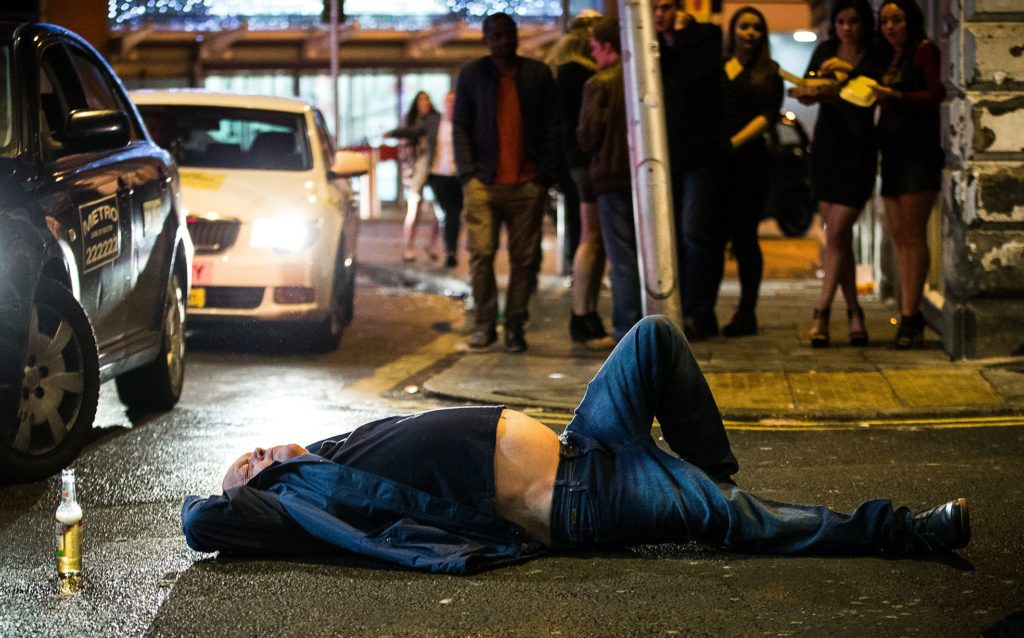 So I tried it. And tried it some more. And more. She was laughing. The bartender was flirting with her. I kept getting more.

At one point I got up to go to the bathroom. Everything was blurry. I fell down the steps. People were laughing.

I like to think they were laughing with me but I think that was probably rarely the case about anything I did.

When I got out of the bathroom I thought I could see through blurry vision the bartender kissing the girl I was with. But maybe I was wrong.

Finally, 3 or 4am, she was holding me up as we went back to the place I was staying. I was making her laugh. I’m a funny drunk and not a mean one. Or maybe people laugh when I hit them because I’m somewhat wimpy.

At one point, in the middle of a busy intersection in midtown, at 3 in the morning, we both fell in the middle of the street with cars coming towards us. She was still laughing. Cars swerved around us.

She got up and pulled me to the curb. I got up again. We made it to my place. She slept on the couch in the living room. I fell asleep on the floor.

At one point I got up and realized my body had something important to say: I started throwing up on the floor. I got up and I was spraying vomit onto the walls like I was some kind of AK-Vomit gun.

I fell asleep there. An hour or so later I crawled back to the floor and slept in the vomit.

An hour or so after that I had an important business meeting to raise money for a hedge fund I was running.

I went to the meeting. I made my pitch. The world was spinning. I didn’t like the guy I was pitching.

Later that day I wrote an article for The Financial Times making fun of the guy I was pitching.

I hated pitching my hedge fund. I hated the people who thought they had power over me just because they could put money in my fund.

That’s why I ended up creating Altucher’s Top 1% Advisory. So I could help regular people invest like a hedge fund without all the BS involved.

But anyway, he turned me down.

I slept 14 hours that night.

A week later I saw the girl again. I didn’t want to see her again but didn’t know how to say “No” to her.

I told her the FBI was investigating me for something and I needed to stay low for awhile and she should probably forget about me for awhile.

I told her, “I’ll call you when this settles down.”

Amazingly, I did call her a few months later but then hung up when she answered.

Anyway: that year I lost all my money, my dignity, and the little self-esteem I had left.

If you fall down unconscious on crowded street corners with cars coming at you and it’s the middle of the night, you’re going to die. How you live also determines how you die.

If you hold the door open for everyone, the door will stay open for you.

I died a little that year. I died a lot.

Ever since then, I’ve been slowly coming to life.

Related: How To Become The LUCKIEST GUY ON THE PLANET in 4 Easy Steps