Love Yourself As If Your Life Depended On It

Kamal went missing. We had been corresponding for over a year, ever since I started this blog. I’m very grateful for the great friends I have met through this blog. It has been a totally unexpected but much appreciated benefit of doing this.

Finally I was visiting San Francisco and after 100s of emails back and forth during the prior year, I was getting all set to meet Kamal Ravikant. But he didn’t show up for our planned breakfast. His brother, Naval, called him a few times. “He’s at home,” Naval said, “but he’s not picking up. His illness must be overwhelming him today.” Naval had a GPS specifically attached to where Kamal was.

Kamal was very sick. This had been going on for months. He had gotten more and more sick. Some days he couldn’t move or wake up. Other days he had enough energy to go outside but only for minutes and then he had to go back inside. Kamal’s sickness was chronic. The doctors couldn’t help him, he was infinitely tired, feverish, in pain, and it was getting worse.

I knew from our correspondences that Kamal had been going through a hard time before he got sick. His company, which had once been well enough to raise a significant amount of money, was faltering, perhaps failing. He had recently broken off a relationship. A close friend had died.

Often when we attach our happiness to external goals: financial success, relationship success, etc, we get disappointed. Even when things work out, everything cycles, the happiness is often fleeting.

When those goals break, the external pain immediately gets reflected into  our internal bodies. Our emotions break. We feel sad, disappointed, in pain. We cling to the past happiness, or our hoped-for goals that now have to change. It often feels like your arm is being torn off your body.

But Kamal was trying to hold it all together to be fair to everyone within his company – the employees, the investors, the customers.  He was clinging to the past, to the future. To everything and everyone except for his own happiness in the present.

So his emotional body couldn’t handle it anymore. His emotional arms and legs were torn off. And then his physical body broke. He completely broke down.  I noticed he had dropped out of touch a few months earlier and I hadn’t seen his comments on the blog in awhile. “What’s going on?” I wrote him. “I’m sick,” was his reply. He dropped out.

But then he started getting better. He started writing again and telling me what was going on in his life. He started commenting on the blog again and interacting with the great community developing here. He was alive again.  We finally ended up meeting.

As Kamal then says in the just published book, “Love Yourself Like Your Life Depends On It” about his experience: 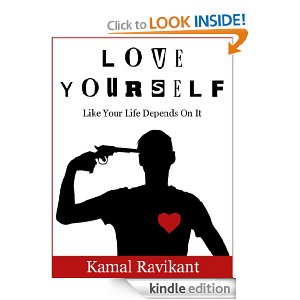 In the book Kamal describes his transition from sickness into health and the other magical things that happened to him. He also gives a series of techniques and practices to try this for yourself in a variety of ways and finally he answers the dreaded question, what happens if you don’t love yourself? Can you still get this magic into your life?

“Think about it,” he said to me months later when we met in NYC, “when someone is in love, they almost magically look better. I needed to be in love with myself to feel better. So much of what had happened had weighed on me until I collapsed. Now I needed to love myself. It became a mantra for me.”

As someone explained to me the other day, the word “mantra” has two parts (in Sanskrit): “man” – thoughtfulness with zeal, and “tra” – to protect. So by saying “I love myself” over and over Kamal was protecting the thought, nourishing it, and the love was nourishing the rest of his body, his emotions, his mind, his spirit.

Kamal is now completely recovered. He also figured out the situation with his business and when I saw him in NYC it was as if a gigantic weight had been lifted off his shoulders.  He is so recovered that I can’t recommend enough the book about his experience, available on Kindle right here. The title: “Love Yourself Like Your Life Depends On it”.  He used Amazon directly, uploaded the book and it became available within days after he wrote it.

“If a painful memory arises, don’t fight it or try to push it away – you’re in quicksand. Struggle reinforces pain. Instead, go to love. Love for yourself. Feel it. If you have to fake it, fine. It’ll become real eventually Feel the love for yourself as the memory ebbs and flows. That will take the power away.

And even more importantly, it will shift the wiring of the memory. Do it again and again. Love. Re-wire. Love. Re-wire. It’s your mind. You can do whatever you want.[…] The results are worth it. I wish that for you.”